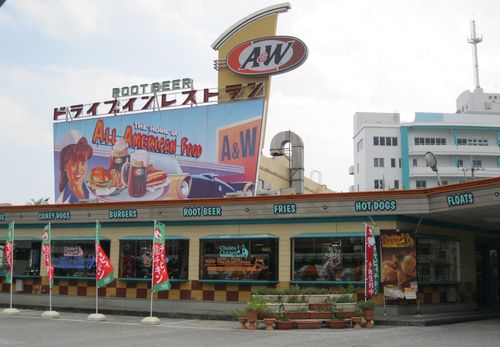 A&W is a rare commodity in the States now. Growing up in Texas and California, I think I’d eaten there once.  I mostly knew the name for their root beer. But over here in Okinawa, they are everywhere!

My kids love their food and especially love their ice cream! It was the first place we tried waffle ice cream. I definitely thought I was ordering waffle CONE, but to my surprise, there were actual chunks of waffles in there.  The kids meals come with the smiley face potatoes and their burgers are good, too! I love their Teriyaki Chicken Sandwich. There’s really something for everyone.

The best part is most of the A&W’s I’ve seen have playgrounds! We frequent the A&W off the 58 past Futenma. You can’t miss it! It’s got a HUGE outdoor playground and “Sonic-style” drive in along with a sit down restaurant area.

Their website lists all the shops on island and the times they open and close, ranging from 10pm-1am closing times and many of the drive-thrus are open 24 hours.

Directions to a few:

There is one off the 58 in between Futenma and Kinser. Going south on the 58, you’ll go left at the split between the 153 and the 58 (where the long bridge is, DONT go over the bridge!), then left into the A&W parking lot. There’s no way you could miss it! Going north on the 58, you’ll still go left at the spilt between the 58 and 153 and instead take a RIGHT at the light to go into the parking lot.

There is another one on the 58 in between Kadena and Foster. Going South from Kadena, there isn’t a space to turn into the A&W parking lot, so make a U-turn at the next available light. Open 8am-1am.

There is one on the 330 in between Plaza Housing and Foster. Going south on the 330 it’ll be on your left, going north, it’s on your right. This one is also easy to spot. Open 24hrs.

Stop in for their famous root beer floats!  …Mmmmm….