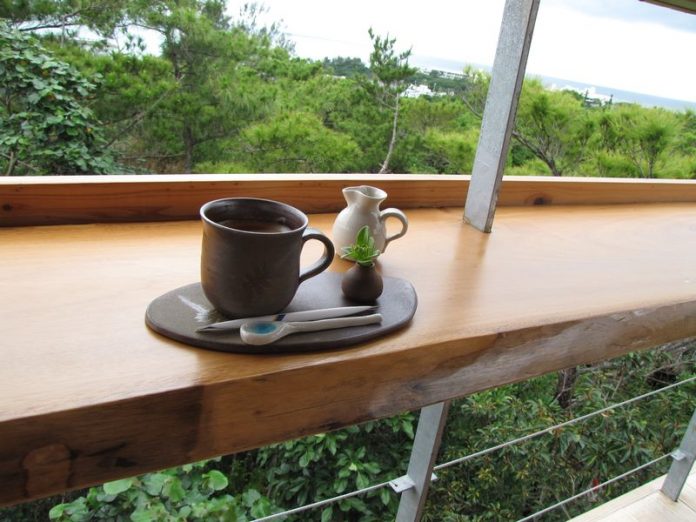 As a stop on the way to the Onna resort area or as a means to survey your domain, Café Do Ka Do Ka is an excellent place to appreciate some of the best things about Okinawa — namely the food and countryside.

Nestled on earth and pillars, Café Do Ka Do Ka offers a place to sip your favorite beverage, ruin your diet with a dessert, and take in the views of rain-forest greenery and the China Sea.

We arrived early for check-in at the Rizzan Resort and as usual decided to explore the side roads. Soon, we were informally touring the Okinawa Institute of Science and Technology (OIST) at the top of the highest hill. On our descent back toward Onna, we noticed a few small, short, hand-made signs for the café. We took a little frontage road that paralleled the 58 bypass and we were there.

It turned out to be as much of a pottery and art studio as a Café and gallery. Once seated outside on the balcony, our friendly host gave us choices of coffees, teas, juices, and cakes. We chose one each hot tea, hot coffee, and mango juice to drink. All were delicious. The tea leaves were steeped in the proper utensil—not in a bag. The coffee was made in an espresso maker not dripped, and the mango juice tasted pretty fresh. The host who is the owner spoke enough English to get by just fine.

In order to select the sweets, we asked to see samples. There were three of us so she brought out three offerings: cheese cake, pound cake, and tofu cake topped with raspberry syrup. We ordered one of each. Once they were served, we passed them around sampling and critiquing them one after the other—which lasted only a few minutes because they were all so good.

Cafe Do Ka Do Ka

Payment: Only Yen was accepted.

Directions:  Do Ka Do Ka is located between the Onna-son resorts and the Okinawa Institute of Science and Technology less than a mile from the intersection of Route 73 and the Route 58 bypass. Traveling on the expressway, exit on 6, follow Route 73 toward Onna-son. At the intersection of Route 58 and the 58 Bypass, turn right onto the 58 Bypass, travel less than a mile and watch for the short, brown sign pointing to the café. There are several. The frontage road will be on the right. If you miss it, go a bit further and turn right there. It is the same road.