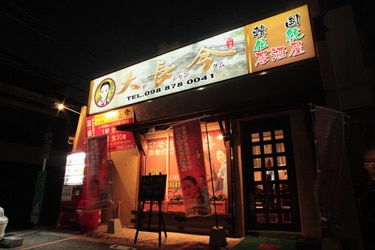 The Dae Jang Geum restaurant (大長今) in Urasoe City (浦添市) advertises its menu as “homestyle” Korean cuisine, and true to the claim, the reasonably-priced menu features items beyond the typical Korean BBQ that most Americans associate with Korean food.

The Name:  Dae Jang Geum is named after a Korean TV drama by the same name, which aired in the United States as “Jewel in the Palace”.  The show itself is loosely based on the life of Jang Geum, reputedly the only female Royal Physician in Korean history…  And if you have any doubt about the origin of the restaurant’s name, a TV in the corner of the front room plays episodes of the Korean TV drama on a loop.

The Atmosphere: I only saw the front room, but I think the restaurant also had a downstairs backroom as well as second floor seating.  Most of the seating is Western-style (meaning tables and chairs), but there are also a few Japanese-style low tables (where you take your shoes off and sit directly on the tatami mats).  The service is friendly and fairly attentive — though if no one seems to be approaching your table to take your order, all you need to do is look in the direction of the bar and say decently loudly, “sumimasen” (excuse me).   The clientele appeared to be entirely Japanese, but at least one of the waitresses seemed to speak Korean.   All in all, it feels cozy and can accommodate parties as small as two and as large as 30.

The Food: The restaurant was opened by Koreans, and the menu features items such as seafood buchimgae (海鮮チヂミ) — Korean-style savory pancakes, Teokboki (トッポキ) — spicy stir-fried Korean rice cakes, and stone pot bibimbap (ビビンバ).  I had one of the Jjigae (written チゲ in Japanese) stews, which comes to the table boiling hot.  The menu includes kimchi jjigae (キムチチゲ) and sundubu jjigae (スンドゥブチゲ) which is made with soft tofu.  The little side dishes that usually come out at Korean restaurants are sold separately (there’s a “normal set” and a “kimchi set”) though the main dishes themselves generally come with a side of kimchi and soup or rice (depending on the dish).

Izakaya: In addition to serving tasty Korean food, the restaurant also considers itself a Korean izakaya (bar) and is open until midnight on Tue-Thur and 0100 on Fri-Sun (closed on Mondays).  Its flagship drink is makgeolli — a traditional Korean rice wine that’s milky-white in color and somewhat sweet.  Known as “makkori” in Japanese (マッコリ),  you can get a pot for １,４９０円.  You can also purchase soju (another well-known type of Korean alcohol) for  １,０００円.  Other beverages include baekseju, orion beer, Okinawan awamori, sour mix cocktails, soft drinks, and tea.  I think there might have been a drink nomihodai (all you can drink) service too.

Payment:  yen only (no credit cards)

Directions:  Located in Urasoe, this restaurant is a bit farther afield than those right outside the base gates, but it’s simple to get to from Rt. 58 and well-worth the trouble if you’re a fan of Korean food.  Simply take Rt 58 south past Ginowan (you can take it straight down or use the Ginowan bypass) to the Makiminato (south) intersection, which is route 153.  This is the first light past the exit for the Makiminato By-Pass.  You’ll see an enormous McDonalds/Pachinko building on the right hand side of 58 at the intersection, and as soon as you turn left, there should be a large garlic restaurant on the right-hand side of route 153.  At the fourth light on 153 go, straight through the intersection with Pipeline Street (パイプライン通り). After the next light, you’ll cross over the Urasoe Bypass. The second light after the bypass will be a large intersection with route 38. The restaurant will be at the intersection on your left (there will be a gas station on the right). The name of the intersection is 安波茶in Japanese.

Parking: There’s some parking directly in front of the building, but if that’s full, you may be able to park in the lot next door (still on your left) if the shops there have already closed for the night.  To return to route 58, simply retrace your steps.Bottom Line: Probably some of the best Korean food on Okinawa.  The lack of English menu and focus on homestyle instead of BBQ Korean food may make it a hard sell for people who aren’t very adventurous… but I think it’s definitely worth a trip.