My house is quiet. And quiet is better than chocolate these days. The last thing Eli said to me before collapsing into a boneless pile of sleep was I DON’T WANT TO SLEEP, IT TAKES TOO LONG! I envy that passion to be awake and roaring until the tank is empty. The way I look forward to sleep makes me feel geriatric. But I have been productive since last we spoke. Not the same as riding my scooter up and down and up and down the street but fulfilling nonetheless.

1. The Dozo Box didn’t go over too well. The first night I put it out and then went to dinner. Then it rained. Then the box was full of rain. I dried everything off and washed the clothes and put it out the next day and the day after that and then one more day after that. Nothing was taken. I’m not sure why it depressed me that no one wanted my junk. I thought it was nice junk.

2. We have tickets leaving the island on June 27th. Now don’t you fret. Maltsby has a space somewhere on the plane too. I have more investigating to do in terms of figuring out exactly what happens if it is too hot on June 27th. Will Maltsby be parked on the curb while we file onto the plane? Gulp. I cannot handle that. In other dogly preparations, Maltsby is getting re-introduced to his crate. He receives his meals and beverages in the comfort of his crate now. Like a king. Additionally, I have bought him melatonin for his delicate constitution, a water bottle that won’t spill and food bowls that can be filled easily by someone outside of his crate. Just in case he’s sassing at his flight attendants and all. All of this wisdom was gleaned from Mary. Mary has lots of answers.

3. I have one swell mother. The swellest of all! She made a project of finding us a new home. She scoured militarybyowner.com for houses in Montclair, VA which is close to TECOM where Joe will be working. She worked with two local realtors. She talked to people on the beach. She went to yard sales and asked questions that only she can get away with asking. She took notes and, behold, we have a home waiting for us. This morning I faxed our housing application and a few minutes ago, the lovely owner of the house officially offered it to us for the next three years. Stop by for tea and crumpets, won’t you? Is it cheating to have someone help you out to this degree? 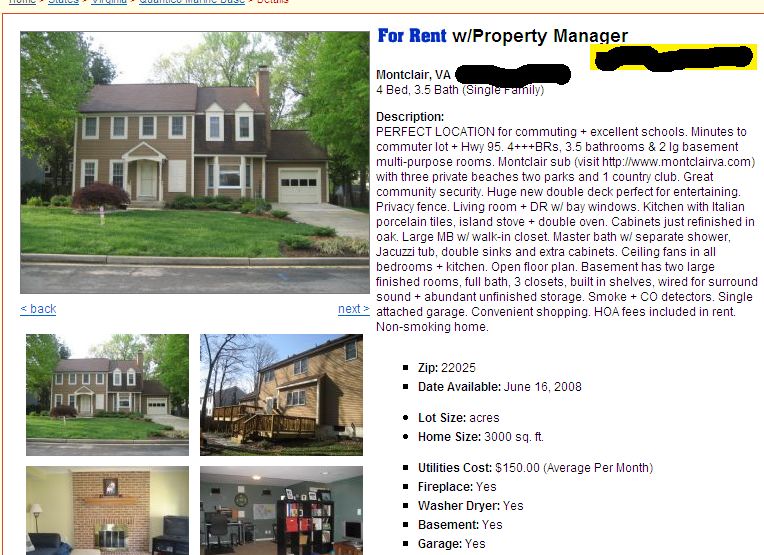 4. Today I had my TMO meeting. I get nervous around a lot of uniforms and the room was mostly full of them. I don’t get all the acronyms and sign language and stars and stripes. I broke into a sweat before I even sat down. I distracted myself by taking out the 12 copies of our orders that they asked me to bring. Actually I made 57 copies because I have problems with numbers AND technology so the marriage of the two never works out. You’re welcome to a copy if you’d like. As I counted out my copies and shuffled papers from this pile to that, an active duty woman sat next to me. She probably regrets that now because I went ahead and asked her every rookie question in the book. I barely understood what happened during that hour and a half. I do know that I have asked for dates for our Household Goods shipment and our Unaccompanied Baggage shipment which is another word for Express shipment. Also, magically, this meeting and whatever papers I signed release our Non-Temporary Storage from wherever it resides stateside. That’s right, Non-Temporary Storage. Probably also Non-Permanent Storage also just known as that stuff you stored but didn’t take here. Now opening those crates is bound to be like Christmas!

So that leaves me with about 46 days left in paradise. I’m not really prepared to talk about that nonsense though.