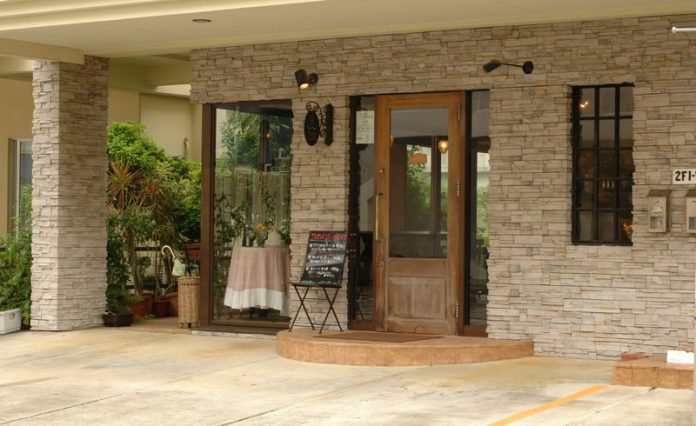 As Okinawa’s rainy season enters full force, I often find drizzly weekends nix beach and hiking plans, leaving me stuck indoors.  The grey sky and pitter-patter of rain often calls for a cup of tea or coffee, a good pastry, and, if lucky, a conversation with a good friend. Okinawa has several secret cafés that are perfect for such an occasion, and Miche Miche is a hidden gem worth seeking out. Perfect for providing a British-esque tea-time, Miche Miche offers a variety of cakes and small snacks, coffee, and tea.  Their menu is in English and Japanese.

We opted for an afternoon tea set for two, which ran about 1500 yen. It came with small crustless sandwiches, a small salad, two slices of cake, and small selection of fruit – all presented on a two tiered platter – and two pots of tea (we chose Earl Grey, which was one of the most fragrant and flavorful versions we have ever had, though they had many other varieties of English tea). The small cakes were rich in flavor, yet not overpowering with sugar.  While the miniature scones were a little too cake-like, the cucumber sandwiches were crunchy and refreshing. As we nibbled on the small delicacies and sipped our tea from china, I felt, momentarily, Victorian.  While not quite the Peninsula in Hong Kong, the crisp tea and lovely presentation lent a feeling of refinement, and deliciousness, to an otherwise dreary day.

We enjoyed the cakes so much that we decided to take a few home as well. The pictures only hint at how good they tasted.  Go see for yourself!