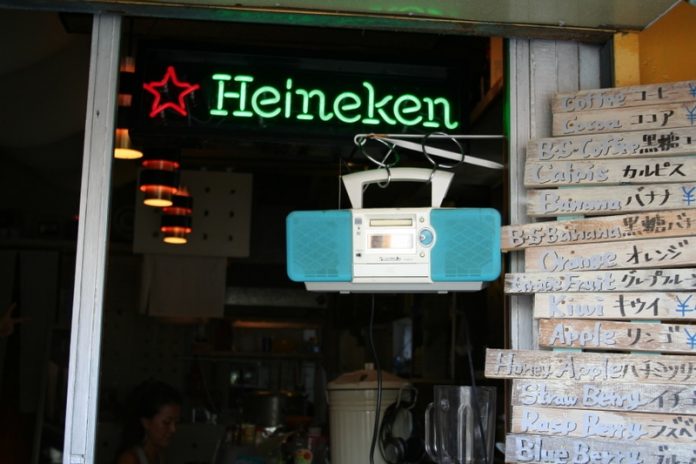 This beach shack’s full name is “Neko House Fresh Fruit Smoothy and Lunch”. Okay, it’s not really a beach shack as it’s, well, not on the beach. It’s across from Lawson’s actually, right off 58. But it’s got that vibe. Laid back and easy-going. And really, really small. I barely noticed it yesterday on the way to the mechanic’s (Mori’s) – a colorful sign for smoothies behind a bunch of construction. It beckoned to me, “Kelly, come partake in our delicious fruity beverages.” I did another drive-by just to make sure I hadn’t imagined the place, probably scaring the two people hanging out inside who looked at me like I was kind of a nutter.

Which I was, because I decided to follow some drunk guy’s parking directions (or what I thought were his directions; he just waved me around the corner) and ended up inadvertently taking a little tour of the seawall for a few minutes until I found the shack again and parked in the big empty lot beside it.

Yeah! It was just as I’d hoped it would be from the outside – a little oasis of grooviness. Like I mentioned, it was a really small space – just a bar area and two tables on the floor. Gabe and I grabbed ourselves a pillow, sat at the bar, and ordered a shot. No, not really. We ordered a mixed-berry smoothie with bananas thrown in. We could have ordered a beer though. That was on the menu. Or awamori. Or a full-on lunch set even. As I sat back and took in my surroundings, I thought what a perfect little happy-hour spot this would be.

The lady in the shop, whose name, unfortunately, I don’t remember started grinding my ice in some hand-cranked contraption. I tried to snap a picture, but it turned out kind of lame because, like all my pics lately it was taken while hanging onto the boy and it’s all luck if a shot is actually in focus. Anyway, while waiting, I got to have a nice chat with the man who owns Neko House, Taku, who was totally friendly and had fantastic English. When he told me it took him two years to build the place by hand, I knew he had beat Jiji for this week’s post. He’s building an upstairs too, which he hopes to have completed next year sometime. Other cool things Taku told me: he’s traveled around the world, he owns a guest house also called Neko which he said means something like “bad kitty”, oh, and that his girlfriend (the woman making my smoothie) makes all the deserts from scratch. Deserts which include chocolate cake. Ummm…(Cursed Weight Watchers!)

So, I didn’t actually eat anything there besides my smoothie which is 500 yen, so not the cheapest treat. But I’d go back and wanted to today (except it’s closed Wednesday and Thursday) because they were just so darn friendly there. Even though it was just me and the baby, I managed to spend my whole time there chatting away with Taku, his lovely girlfriend, and their friend who stopped by. Oh, and the food looked good too. Taku said the menu changes frequently. The friend (and only other customer while I was there) ordered this great looking lunch: an antipasti plate with egg, potato, fresh veggies and other yumminess; a stone pot of curry, soup, and dessert. She said “OOIIISHIII!” Okay, they were friends so that was the polite thing, but it did look darn oishi! So now, I guess we’ll all have to go back there and find out!

Directions: Leaving Foster Commissary Gate turn right onto 58 going north. Almost immediately you’ll see a Lawson’s on your left hand side. Turn left on the road just before the Lawson’s. Neko Smoothie is caty-corner from Lawson’s covered in scaffolding. There’s a vacant lot next to it. You can park there. Just be careful because there are tiny metal spikes (marked w/ green) in it where they are doing construction (I imagine this vacant lot will not be vacant in a few months, in which case I’d guess parking on the street would be your best bet.) You should see a banner with a cartoon cat on it outside also the smoothie listings if it’s open!