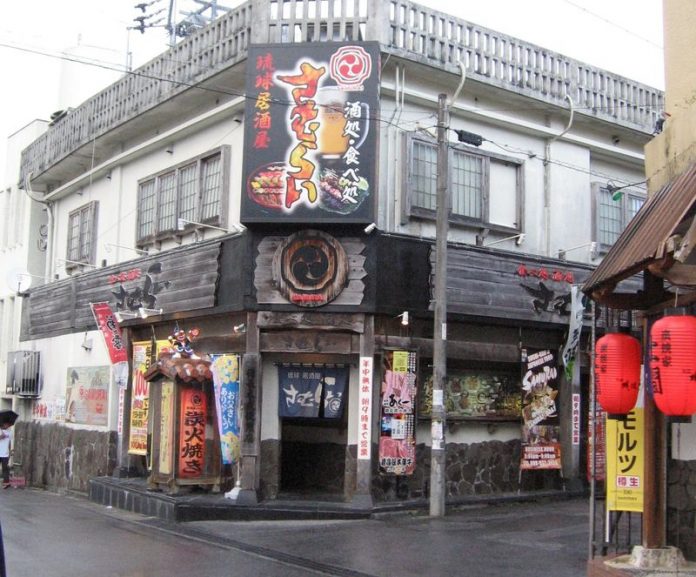 But most of you readers are somewhere on Okinawa. Do not fear! We have our own Samurai Sushi! It is a pleasant sushi bar and Japanese food restaurant tucked into the Koza Four Corners area.

We intended to try the samurai sushi boat, but after viewing the numerous menu choices we ended up ordering three separate sushi rolls.  We ordered a tuna roll and were asked if we would like wasabi in the roll.  We tried it and were really glad we did!  The wasabi almost made it into a spicy tuna roll.  We also tried the Alaska roll and their signature samurai roll.  It featured avocado, egg, cucumber and eel.  All of the rolls were as beautiful as they were tasty!

The menu was large and showcased more than just sushi.  There was an extensive drink menu, both alcoholic and non.  There were sashimi, sushi, grilled, fried, Okinawan, and rice selections on the menu.  The menu was in both English and Japanese and had pictures of almost all the items.

The atmosphere was pleasant.  There were tatami mats throughout including the bar area.  Some of the tables had sunken foot areas, while others had backrests and floor cushions. Our table had a view of a beautifully landscaped outdoor fountain.  The one downside to the restaurant is that it had a distinctive cigarette smell.

Directions (a bit tricky, but the pin below is accurate):

From Kadena Gate 2:  Drive down gate two street and take a right at the Koza Four Corners intersection onto 330.  You will see GGG and Four Seasons Tempanyaki on your left.  Directly across 330 there is a free parking lot.  You will have to U turn to get there.  Drive through the parking lot to the back entrance.  One short block later you will see Samurai Sushi’s 5-car parking lot on your left and the restaurant on your right.

Coming from the south on 330: Drive north from the Ground Street intersection with signs for the Koza Athletic Park.  Turn left into the parking area directly across from the GGG building just before the Four Seasons.  Drive through the parking lot to the back entrance.  One short block later you will see the restaurant’s small parking lot on your left and Samurai Sushi on your right.