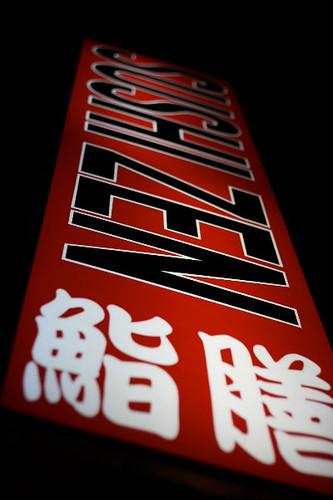 This past July, a new restaurant, Sushi Zen, opened its doors near the Sunabe Seawall. Local sushi lovers frequent this neighborhood spot to enjoy conversation with the friendly chef and owner (who moved here after spending 25 years in Queens, New York – and loves to talk about it), eat delicious rolls and sashimi, and spend time in the quaint, inviting environment. There really isn’t much in the way of cooked food on the menu. The extent is probably the shrimp tempura roll and the grilled unagi, but if it’s the raw fish delicacies you’re craving, this is the place. Beer, sake, and awamore are served in addition to the regular non-alcoholic beverages.

My friend and I walked in past the well-lit menu placed outside the front door, and the red and black vertical sign overhead. We sat in the larger tatami area next to the eight-seat sushi bar. The warmly lit room was very comfortable, and there were bits of New York memorabilia tastefully scattered around the restaurant. A subway map is on the wall in the hallway toward the rest rooms, and in the main dining area you’ll spot a framed set of New York license plates. The room is small, and so the conversation flows easily, even among the patrons, and the staff is attentive and kind.

I ordered some cold sake (daiginjyo), which was served in the typical way. The server put down a cube-shaped wooden cup called a masu box, and placed a tall slender glass inside. She unsheathed a large green bottle and started to pour, and when it got to the top of the cup, she kept going. The sake overflowed into the square cup until it too was filled. This is a gesture of generosity and hospitality.

We ordered house salads with a citrus ginger dressing and edamame to start. For the main course we ordered a flower roll (tuna wrapped around the rice and seaweed with avocado in the center, put together in a flower shape), a rainbow roll, negihamachi roll (yellowtail with scallions), a dragon roll, hamachi sashimi, and a spicy tuna roll. The hamachi was a bit firm on this visit, but very tasty, and the other fish and the salad was fresh and delicious. At a previous visit, I had tried the seafood salad (assorted raw fish atop a cool fresh salad with the ginger citrus vinaigrette) and the tako (octopus) and they were also fantastic. At the end of the meal, the server placed a plate with some sweet pear slices in front of us as she presented the check.

I’ve eaten there several times (I live in the neighborhood) and I’ve yet to speak to anyone who doesn’t love the food and the experience at Sushi Zen.  The prices are reasonable for the quality. The only complaint I’ve ever heard is that it’s crowded and the wait for a table might be too long. In my opinion, it’s sushi worth waiting for – or just go early!

Sushi Zen is located very close to the Sunabe sea wall. Go out Kadena gate one south on 58. Make a right at the light with the Chinese restaurant on the right/Family Mart on left (toward the Sunabe Sea Steps); go almost all the way down until you are at the second to last block and make a left. Take this all the way to the end and you will reach a one way road, go right (the only way you can go) the road curves around to the right and runs along the sea wall, park along the wall. This location is two or three doors down from where the road curves, on your right.