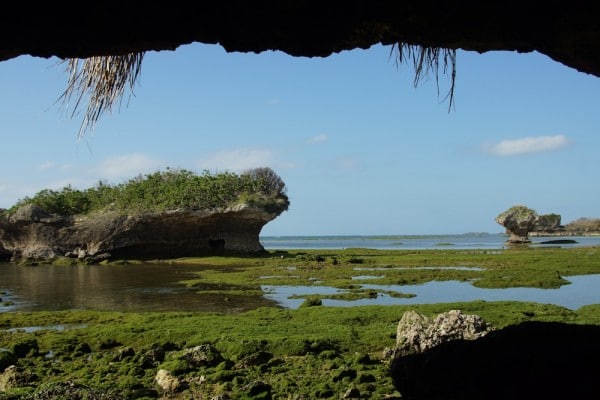 The gentle rustling of the sugar cane leaves beckoned us a warm welcome as we made our way down to the gentle waters of Toguchi beach. The tide was out this time of day, and tidal pools could be found all along the stretch from the beach to the small island bisected by a rivulet of water traversing it.  Amir and I navigated the dry spots to investigate the little outcropping of land, bisected by the sea.  We were both surprised and impressed by the presence of a beautiful blue starfish, resting just under the surface of the water.   He’d never seen one in its natural habitat.  We saw long thick, shiny ebony sea cucumbers, cute little crabs, and shimmering neon blue fish.

We stopped to snap pics at another small cave a stone’s throw away. This cave, carved straight out of the craggy, sharp coral, looked out over the water.  We made our way back and met up with Nasser.  He’d been exploring the trails near the shore as we’d hopscotched along the tidal pools to the little starfish island.  We meandered the winding trails, coursing along the beach and found several lonely and beautiful caverns.

Then, we hiked up the side of the hill and found many solemn caves and sacred shrines.  A battle had been held here; I wonder if some of these commemorated the lives lost during WWII.  One of the caves had a hole right through the roof.  Amir had popped  around the back of the cave and scaled the hill; he poked his happy face down the top of the hole and snapped a couple of shots of us as we gazed up at him, amazed that he could find his way through the jungle terrain to that exact spot.  We took his photo and then somehow slung our camera up to him to take a picture of us with our camera.

We made our way back and stopped for photos near one of the myriad of granite commemorative carvings.  An old bike rested against the side of the hill, its owner likely fishing off the jetties nearby.  We’d just chanced upon the fisherman along the shore.  I’d crept out onto a concrete overhang, while Nasser and Amir rested uncomfortably on the sharp rocks.  We’d enjoyed cool Japanese soft drinks as we basked in the warmth of the sun.  What a peaceful and delightful afternoon.

Others had flocked to this sweet haven to enjoy the afternoon as well; there was a park, chock full of giggling, squealing children who’d descended eagerly on the colorful playground equipment.  I’d never seen such a park; one slide was constructed of thousands of rollers, that the child propelled along by pushing against the walls with his or her hands.  I almost wished for younger days to try out that happy contraption.  We lingered awhile at the adjacent beach, then set off for another adventure elsewhere on this incredible island.

Nasser and I would return a short time later for lunch at the restaurant on the grounds. Before we ventured into the restaurant, we chanced upon a group of young men and women attired in the most beautiful, Japanese cultural clothing.  What a treasure. They were actually eager to have their pictures made as they celebrated this special day.  Then we strolled over to the restaurant.

The Toguchi Beach Restaurant had the familiar red, white and blue paper Orion lanterns strung up all around, in a celebratory fashion. The slanted, red, clay tile roof reflected the traditional Japanese décor and fair of the restaurant.  The restaurant held three dining rooms with strikingly different presentations.  I peeked into the Japanese style room, and on the way out I would slip off my shoes, step out on the soft thick grass mats, to inspect the room, containing two lines of low tables and simple design.  Outside dining on the opposite end of the building were more rustic, simple picnic tables mounted on a wooden deck.

The dining room we chose (as it was misty, cool and cloudy that day), was the central dining room, where there were American style tables and chairs lining the maritime themed room, nearly completely glassed in to offer sweeping views of the little island, hills and beaches we had explored just days before.

Healthy, green plants rested all along the low window sills, some in hand made pots, one in a diced tomato can with the jagged lid still attached at one point, still, others rested in large ceramic coffee mugs. Several palms lined one wall, and their pots held a few dried coconut shells at the base of the palm.   Three deep sea fishing rods and reels were suspended from the ceiling, strategically positioned around the smart looking, tasteful little bar.  One of the rods dangled a colorful wooden fish from its line, and the other two long, heavy, colorful lures.  A small surf board leaned against a corner of the ceiling, and basketry light fixtures softly illumined the room. Several, large Japanese glass fishing floats, shrouded loosely in course rope casings rested in each window sill, nestled next to the plants.  Even the little wooden crates holding the condiments and napkins and the tiny ceramic pots serving as tooth pick holders, attest to the attention to detail of the restaurateur.  In one corner of the room, at the end of the bar, a mammoth hermit crab scraped along the side of his glass enclosure.

The fragrance of roasted meat that permeated the entryway had somehow been concealed from the dining room.  We were free to make our selections unbiased.  We actually   chose the fresh sliced sashimi and tempura tray.  We marveled at the striking presentation.  The large, bento-style lacquered tray, carefully arranged to please the eye, was elegantly filled to capacity with culinary delights, and decorated with a small sunny yellow flower, surrounded by billowy clouds of shredded turnip straws, set off with minty Shiso leaves.   Arranged in triplet sections, the small stacks of delicate sashimi nestled up next to its own little turnip nest.  The sashimi tasted nothing of fish, but more like the tenderest filet steak.

A single chunk of fried tofu crusted with crisp onion and spices rested next to the bed of sticky white rice, which was sprinkled in the middle with black, roasted sesame seeds.  The piping hot mound of fresh, crisp tempura vegetables and shrimp positioned itself at the pinnacle of the tray, just under the bowl of soup.  The single, enormous shrimp rested on top, and truly was exquisite, as were the sweet orange yam, the tender eggplant, the aromatic bell pepper slice, soft shitake mushroom, and a tasty, tiny sole type fish.   The miso soup rivaled any I’d tasted.  Finally, a small dollop of slippery sea weed concoction, which tasted far better than expected, set inconspicuously off to one side.  The atmosphere delighted our senses as much as the food did, culminating in a wonderful dining experience.  By the time we left the restaurant the heaviest mist settled in.  We lingered a moment under the covered portico, watching the carefree local striding through the ankle high water near the shore.

We drove around awhile, exploring from the safety of our warm, dry car.  We stopped by the local thrift store to hunt for glass treasures, and found a hand blown, blue glass plate, with twisted molten glass edges.   Then, we set off for home, stopping at a little bakery to pick up a couple of pastries.  We shared a few cookies with hot coffee, from our thermos, in the car on the way home.  We collected our things, took the elevator to avoid slipping on the wet, polished concrete steps, deposited our belongings in the house and then settled in for a rainy day nap, an indulgence we rarely participate in.   Then we shared a small piece of the cream filled sponge cake and hot tea, decaf Earl Grey mixed with Constant Comment (orange, clove tea).  Too rainy to go for a walk, we will spend the rest of the gray evening inside, playing backgammon instead…

Note:  Lunch menu is less expensive, has more Japanese foods, variable price range from a few hundred yen to 1200 yen (for a very large “set”). Dinner menu has steaks from 800 yen to 2300 yen.

Directions:  If you are going from Foster, North on 58, pass the Kadena Marina restaurant on the left, then take the next left at the light.  Go towards the water, there will be a little fork in the road, bear right so that you are staying on the closest route to the water.