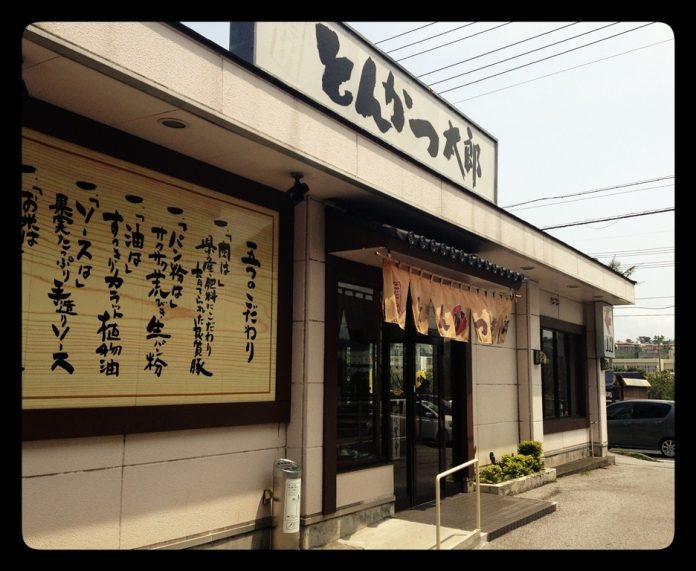 Driving past Tonkatsu Taro you would have no idea what they serve, since all the signs are in kanji. Luckily, several of my coworkers have been there and love it. I decided to join them one day for lunch. I had tried tonkatsu once before, but that was when I was first on-island and really had no idea where it was.

The restaurant is very clean and open, and the staff is very friendly. Be forewarned: they don’t really speak English, but they can make out what you order and ask for. For anyone like me asking, “What is tonkatsu?” It is a traditional Japanese food which normally consists of breaded, deep-fried pork cutlet. It can also be different types of meat as well.

The menu at Tonkatsu Taro is pretty extensive when it comes to tonkatsu, and they do have menus with English translations. They also have a display just as you walk in with the different foods they offer. It’s just like the ones that Big Bird tried to eat when he visited Japan in his TV special.

A pork tonkatsu set will run you about 930 yen.  Included in this set is the Pork Cutlet, salad, soup (miso or seaweed), and rice (white or beans). The miso soup and beans rice are delicious. I love finding all the fresh vegetables in the miso soup and the little beans in the beans rice. For the price the set is the way to go, and they ask if you want more salad and rice once you finish the first helping.

Some of the foods they offer are the traditional tonkatsu pork cutlet, chicken, and shrimp, but they also offer some fish tonkatsu that almost looks like a roll. My coworker that tried the fish said it was very good.

They also have tonkatsu in a pot, which another coworker tried. Basically the meat is in a bowl with sauce instead of being separate on a grate. The grate allows excess crumbs or juices to fall off the meat, keeping it crunchy and tasty.

Once fun thing I had not known about with tonkatsu is the meat is dipped into a sauce.  Just before your meal arrives you will be brought a small bowl with sesame seeds in it and a mortar to grind the seeds and mix it with the sauce.  There are two sauces to choose from the blue jar (or the one with the label) is the hot sauce and the red jar is the mild.  I mixed the mild with my ground up sesame seeds and it was delicious with the pork tankatsu I ordered.

If you are looking to try traditional Japanese style food that is something other than ramen or soba, you should give tonkatsu a try. You never know if you will like something until you try it!

Directions: It is just off of Rt 58 in Chatan. Before you get to American Village area if you are coming from Foster. It is located between Rt 23 and Rt 24 on 58.