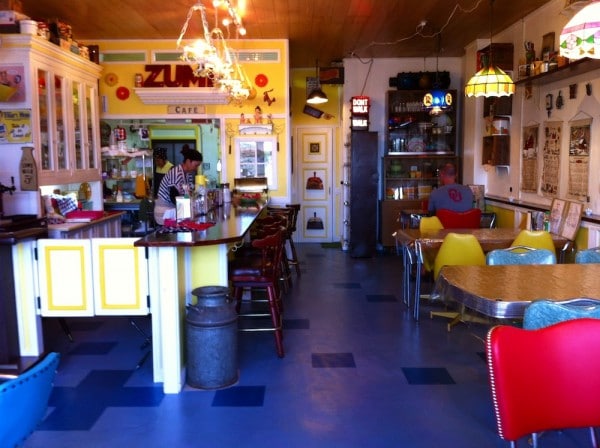 Do you miss the ambiance of diners in America? Water glasses bigger than a Dixie cup, normal napkins and jukebox music? Let’s admit, you can only eat at the on base establishments so many times before you get sick of them. Or maybe you’re a hospital staff member and are curious what you can eat after shift once the new hospital opens on Camp Foster? Well, look no further than Zumi Café, California Retro Style Diner! A brand new restaurant that opened at the beginning of September 2012 could be the answer this quest. It serves a small menu of both Japanese and American style foods, including a few sushi rolls, burgers and fish & chips baskets.

The owner is an Okinawan woman who is married to a Marine, and they just moved back to the island after being stationed in the San Diego area for a few years. While living there, Noriko worked at a sushi restaurant and got to know Americans’ tastes for different kinds of rolls and fillings and also fell in love with American retro style.

She picked a perfect location right near the new hospital in preparation for the move soon, and has decorated the entire inside of the restaurant with items she picked up at thrift shops and garage sales in California. The ambiance is wonderful and we felt welcome and at home immediately upon walking in. Noriko showed us a magazine rack where she has laid out reading material detailed towards both men and women to entertain themselves while waiting for their food. I was very content reading an issue of Good Housekeeping while my husband was immersed in some car magazine. If you’d rather not read, there are tons of things to look at on the wall, all seemingly from the late 1960’s to mid-1970’s: calendars, baking dishes, hubcaps, Tiffany style lamps, an old Coca-Cola refrigerator, street signs, military themed decoration and other household items made into wall adornments. It reminded me a little bit of Cracker Barrel.

We were served ice water in mason jars and given a quick explanation of the items on the menu. We started with the shrimp crunchy roll, which was so incredibly delicious that it was inhaled before I could get a picture of it. Noriko won’t reveal what ingredients are used to make the “crunchy” bits that the final roll is dusted with, which is probably wise since it was absolutely wonderful.

For my lunch I went with the fish and chips plate, served in a traditional diner basket and checkered paper. The fish was perfectly seasoned and crispy, and it was served with a homemade tartar sauce. Normally I am not a fan of tartar sauce since it’s so vinegar-y, but Noriko’s version tasted great!!

My husband got the Zumi burger, which is basically a beef patty with peanut butter, jelly and bacon slathered all over it. I was not adventurous enough to try it myself, but he said it was quite tasty.

We had a wonderful experience and will definitely be going back. We were the only SOFA status customers in there, and some local residents were sitting at 2-3 tables nearby, also seeming to enjoying their food.

Payment: Yen only, no dollars or credit/debit cards.

Parking:  Along the street. We were told that the police do not ticket from 6am-10pm along the street, so just make sure to move your car so it’s not there overnight.

Directions:  Coming from the Legion gate on Camp Foster: Turn right onto 81, towards 58. Stay in the left lane, and start looking for a parking spot once you pass the new Naval Hospital on the right. It’ll be a couple blocks before the Tortilla Factory on the left hand side.

You have to really look for it, since it’s just a storefront and is partially covered by trees when you see it from the road.