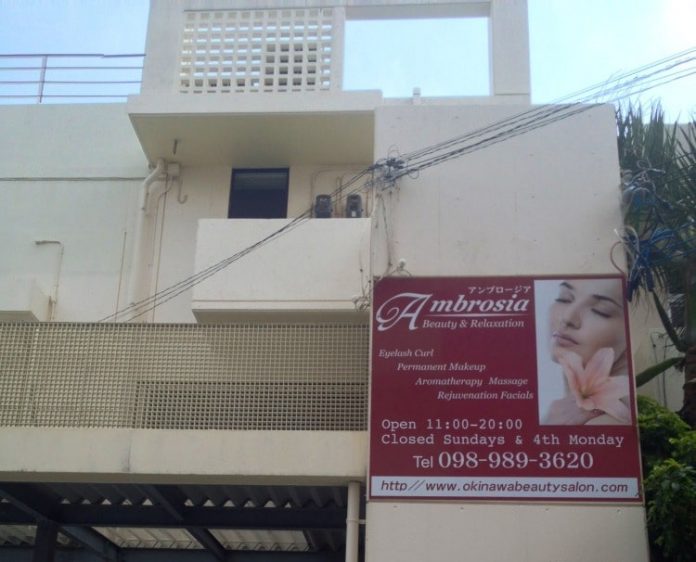 After a friend’s recommendation, I finally decided to take the plunge into the world of permanent makeup. Ambrosia is a gorgeous little salon that is along the sea (with the treatment rooms looking out to the sea). The thought of having a tattoo needle so close to my eye was anything but comforting, but as soon as I walked into the salon I was put at ease. The environment is so calming and relaxing, and Akina-san does a very thorough job of going over everything and answering any and all questions to make sure that you get the customized service that you need.

I went in for upper eyeliner, which costs 20,000 Yen. The price includes one free touch up within three months of your initial service. Any touch ups following that cost 5,000 Yen.

After selecting the shape and style, and having the line drawn on with a pen, Akina-san applies a numbing cream and then leaves it to sit for 15 minutes. Despite knowing that I was about to have needles in close proximity to my eye, I still almost fell asleep during this time because of the very calming atmosphere of the salon.

The application was uncomfortable, but not to the point of being unbearable. The points where it was most uncomfortable weren’t necessarily because of pain, but more so because of having an object so close to your eyeball. The natural instincts are to flinch and try to close the eye. I don’t know how she does it, but Akina-san has an amazingly steady hand despite any flinching that may occur!

The entire process from start to finish (including consultation, numbing cream application, and ice pack following the procedure) takes an hour and a half.

When I left my eyelids were quite swollen (I wouldn’t have wanted to do anything or see anyone afterwards; in fact I wore sunglasses driving home). The swelling slowly decreased and by two days post-procedure the swelling was almost gone (I did apply ice when I got home to help encourage that along).

Overall I am extremely pleased with my results, and ecstatic that I will not have to apply eyeliner ever again in my life! It makes going out without makeup a lot better too (I don’t look tired, but rather have a refreshed look because of the permanent makeup). I will be going back in one month for my free touch up. I also have scheduled a spa service.

Directions: From Kadena Gate 1, drive south on 58, turn right at the third traffic light after gate 1 (the light after you pass 23, going towards the Sunabe seawall). Go through the next intersection and continue towards the seawall, turn left on the first side street adjacent to the new San-A shopping center. Go straight about 200 feet and park either in the covered space marked for the salon, or drive down and park along the seawall (do not park on the street where the salon is)