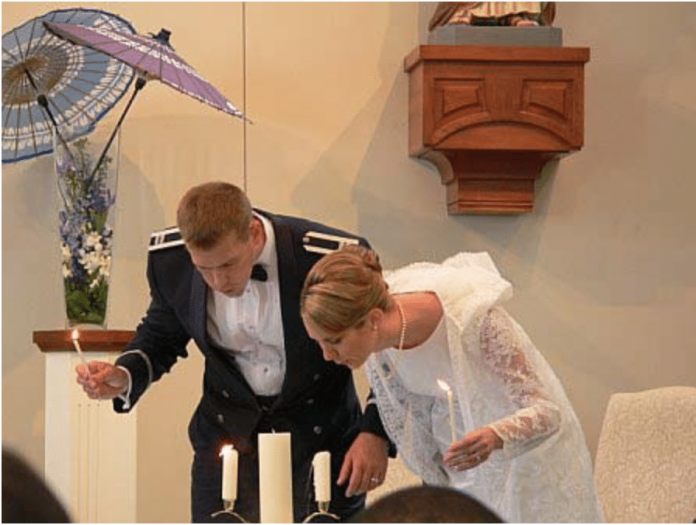 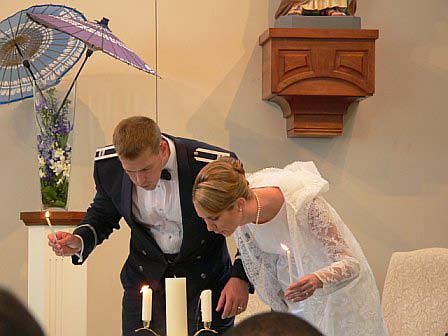 I didn’t just fall in love with Okinawa. I fell in love in Okinawa, during my second tour there. Steve and I had so much in common: both Air Force brats, both into photography, both into our faith, both love to read, both prioritize travel, and both adored living in Okinawa. Ask either of us, and we’ll tell you it’s the best place we’ve lived in our thirty-plus years alive. We made wonderful, lifelong friends in Okinawa, many of whom actually came to our wedding.

We got married in the DC area where both sets of parents retired. Hardly any of our friends and relatives came out to Okinawa, and we wanted to share our love of Okinawa with them. That’s where we got the idea for our Japanese-themed wedding (heavy on the Okinawan details).

If you ask Steve what his favorite color is, he’ll tell you: Okinawa Ocean Blue. Shortly after his proposal, we decided that would be the wedding color. We all know that the ocean there is a variety of amazing colors. That freed me from having to match blues exactly…any light blue or aqua blue would work. It’s not like I had the luxury of seeing many of the details in person; I stayed in Okinawa until the month before the wedding and planned the whole thing by phone, email, and my retired father.

I bought the wedding favors at the 100 yen store, the botanical garden, and the airport gift shops (actually cheaper than other tourist spots, believe it or not!). Magnets, fans, soaps, and any little doo-ma-hickies with Ingrish on the packaging were free game. Of course, they were given to guests in white organza bags to make them less silly and more wedding-ish.

Our cake top was a pair of blue shi-sas. The cake itself had passion fruit filling. If you haven’t been to the passion fruit winery on the way to Peace Prayer Park, you’re missing a cool little stop and some free samples. The cake was frosted in white with fondant ribbons on each layer. When I explained to the artist of a baker what our wedding color was, and why she wasn’t getting a sample of “the” wedding color, she marbleized the fondant with aqua and blue, to look like water.

Our wedding flowers were heavy on the white orchids, chosen as soon as I learned that some orchids are cheaper than roses! Orchids were in the boutonnieres, and mixed into the bouquets. There was a spray of orchids over the appetizer table (veggie sushi…we were on a budget). The flowers at the church, which later adorned the buffet, were actually Japanese parasols in a vase, with some flowers showing through the glass. My 1,300 yen parasols saved us hundreds of dollars on the flower arrangements!

Fans from the Schilling Community Center store and the 100yen store were on the reception hall’s mantle piece and on tables. The kids loved them! Our “guest books” were two kokeshi-doll scrolls, commonly called “sayonara dolls” by Americans. The Schilling store had them in fabric that looked like wedding kimonos!

Our ring pillow was a pillow I owned of sentimental value, covered in fabric a friend bought for me while TDY in Korea. The blue fabric had sakura on it, a favorite aspect of spring in Japan for Steve and me.

To top off the evening reception, I changed out of my wedding dress (it was nearly impossible to dance in) and into a white Chinese dress, which cost a whopping $36 at the mini mall connected to the Foster BX. The dress was a major hit, and I took great delight in telling a few close friends the price.

It was such a pleasure to share our love of Okinawa with our loved ones. As if the day could be any more perfect, we discovered that the hotel we booked online for our wedding night had two humongous shi-sa’s in the lobby! Was that a good omen, or what?!