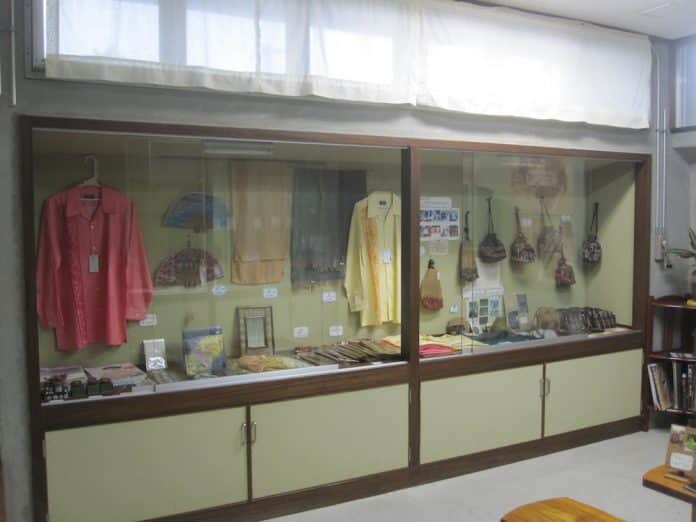 We walked in and there was a Japanese woman who did not speak any English at all. She smiled, we smiled, then we both looked around. My thoughts were: “Hmm… Purses, shirts, pieces of possible bashofu… that’s it?” As we looked around, the lady started weaving using a spinning wheel. More thinking on my part: “That’s cool. I saw that in Thailand. But what is supposed to make this place stick out from the rest?”

I finally found an old newspaper article that was in English along the walls. And as I read it, she asked, “Eigo o?” (meaning ‘English?’) and pointed to the TV. We quickly nodded our heads and watched a very interesting video on ‘Bashofu’ and she served us some tea. Before watching the video, we had no idea what Bashofu was, so the video was very interesting. Put simply, bashofu is a fine fabric made from banana fiber. But there is a very intricate and laborious process to Bashofu weaving. Making this fabric can take up to 3-6 months – lots of patience and labor. And it takes two years for the plant to even mature before starting the fabric making process. The process includes cutting the banana stalks and peeling them apart layer by layer, then boiling the fiber in a wood-ash solution, then scraping, drying and separating the fibers with your fingernails, then tying them together, then hand spinning. Then there’s dying, more steaming, outdoor drying, then putting the fibers on the loom. Then the weaving starts and just when you think it’s almost done, there’s more boiling in wood-ash, soaking in rice powder and gruel, and stretching and drying. Then hand-rubbing with an inverted tea cup finished the long process. It takes 200 trees to make just one kimono! I couldn’t believe that people actually did all this once-upon-a-time. It is hard to believe that this had actually been a part of Okinawan culture until western clothing was introduced to Japan. Wearing clothes from the west was cheaper and easier to wear than kimonos. There was no way, in my thoughts, that people would still be Bashoku weaving. I was wrong.

Bashoku weaving has started again all because of a woman named Toshiko Taira, a master weaver and one of Japan’s “Living National Treasures.” She is responsible for the post-war revival of this technique which dates back to the 13th century. After watching the awesome video, our family had to know where she was. After all, the show looked as if it were from the 80’s. We asked the lady at the counter and all she probably understood was “Toshiko Taira.” She pointed to the ceiling and showed us a door that led us to the second floor. Somehow, we had missed the little sign on the door that said we could see the factory. So there really was a factory! We rushed up the stairs and were blown away.

Old Okinawan ladies were there, still quietly weaving away, just like in the video. They were still dying, weaving, and separating fibers. And in the corner, set apart from the other ladies was Ms. Toshiko Taira, smiling and weaving away, slowly but surely. I wanted to take her picture—just her smile, her demeanor was captivating. However, visitors are not allowed to take pictures in this area. I tried my best to not stare. She was probably over 90 years old, but she looked so peaceful and beautiful creating the art that she had brought back to life. My thoughts then: A sigh, and a peaceful, “Wow…”

Bashofu would probably have disappeared if it weren’t for this woman. After we left the factory in awe, I had to do a little soul searching. “Now what can I do? What difference can I make in this world?”

Directions: From Okuma’s entrance, turn right on Route 58. Follow route 58 for about 4 kilometers and take a left just past the village hall. Drive about 150 meters to the Agricultural Hall and park across the street in front of a large map. There you will see a small path on the right leading to the Bashofu Weaving Factory.