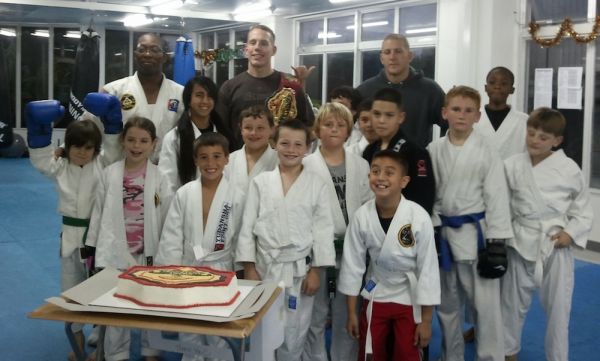 Tara used to live on Oki and was our Forum manager.  She now resides in Texas, but just had to write and tell us about her family’s incredible experience at this dojo.

My nine year old son left his hoodie at school last week and today when he came home he cried that it was gone forever. This is not just any old hoodie, this one is from his Mixed Marital Arts class in Okinawa. One that would be hard to replace. I knew right away that if my son still misses his class 10 months after our PCS enough that he cried when he lost his Capoeira Academy hoodie, I needed to spread the word to you and yours that this is a place you need to get into while you are still on island.

We started at the Capoeira Academy mid-tour. I saw the signs once on a car on base, came home and called the dojo and spoke with the programs director.  She encouraged us to come watch a class. I thought it was amazing the way these little kids were flipping and moving, my children did too until we stayed to watch the Yudansha MMA (Kickboxing, Jiu-jitsu, Judo and Arnis). My then seven year old son looked at me and said, “I want to do that!”

My stomach dropped. I am not a big fan of MMA or octagons so I was worried, but I figured he could try it out. After the first class, he was hooked. He left after every class sweaty and exhausted but at the same time energized and always replaying what hold he got someone in or the one he got stuck in. I was for a while the mom wincing when he would get in a hold or get tapped out and he did cry some at the beginning. Not that he was physically hurt, his pride had just been tapped out and that is enough to make anyone cry. He loved going to class, and in no time was much better and had a little six pack from the conditioning.

The main instructor, (their Sensei, or Mr. Ben) Ben Moriniere has over 15 years of training in the arts of Capoeira, Judo, Jiu-jitsu, MMA, Kickboxing and Arnis. This is his 7th year teaching on Okinawa he has a passion for teaching and is a skilled instructor. He is a great combination of gentle and firm and my children miss him very much.

My son thrived in this class. I saw him push himself and he learned as much from the instructors as he did from the other kids. These boys became very close, even the much older kids were always encouraging. If you are a parent who is worried about the tapping out feature of MMA I totally understand. In this class there is always someone watching the “roll” and talking them through how to either change position to get out or how to tap the person out. I was never worried he would be injured. To move up in belts they have to know a ton of moves and compete in a tournament. They do not just give out the belts in this class.

The tournament was a whole different experience for our family. I have three daughters, my son is our youngest. I had never been in a place with so much testosterone. Holy cow. My son was very nervous, but I believe I was more nervous if that is possible. They went against children in the same belt and weight category so that was a relief. No giant child would just squish mine right off the bat. It was an intense few minutes where I could really only hear my own heart beating. He fought a good fight but in the end did not win.

He went on  to compete in three tournaments and the last one beat the little boy who originally beat him the other times. I have never seen a child so proud of himself. It was amazing.

The Capoeira Academy also has Women’s kickboxing class that both of my teenage daughters went to. They would come out of there soaking wet from the workout, and swearing they could take out a mugger. They also built confidence in the things their bodies could do.

Now that we are gone from Okinawa, we have tried to find somewhere for my son to train and my daughters to kick box. We are in a large city but finding the kind of class where the instructors care about your children and the other participants arenʼt out only for themselves has been daunting. My son compares every instructor to Mr. Ben, and none of them hold a candle. We miss the island but we also miss the family we had at the Capoeira Academy. You should definitely check it out and tell everyone I say HI!

By the way we did find the hoodie, he can now breathe easier.