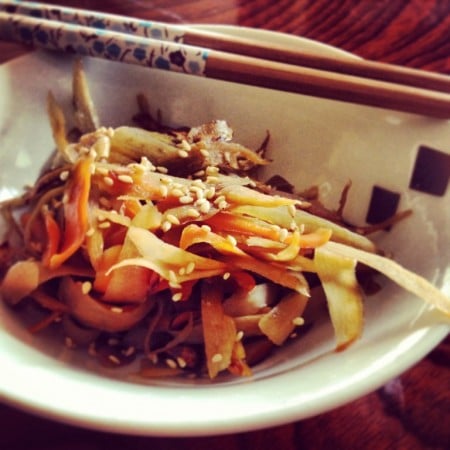 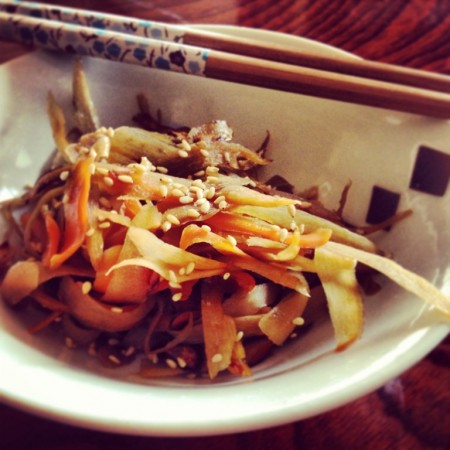 Gobo (ゴボウ) is the Japanese name for burdock. It’s a root vegetable that has a very pleasant and earthy taste. Kinpira (きんぴら) is a Japanese cooking style that employs two cooking methods in one pot: sauté and simmer. Hurray, for one less dish to wash!

When we arrived on island I saw lots of fresh burdock; I was excited to try cooking with it. I chopped it up and threw it into a soup. It was ok, nothing great though. I tried it a few more times because it was local, and healthy, but I wished it were more appealing to me.

Then, during a trip to Seoul, I fell in love with burdock. Husbatron and I kept having this particular type of banchan (Korean side-dishes), and couldn’t figure out what it was. He found this fabulous Korean porridge place, which happened to be run by a Japanese family, so I asked about the banchan there. Wanna take a guess? Yep. It was gobo. Asking for a recipe was a tad outside of my ability, but before long, I found a way to duplicate a close approximation of this delicious preparation. Gobo is pretty fibrous, so it didn’t have a pleasant mouth-feel when cut on the bias. Long, thin strips are much better. Fast forward through some trials, tribulations, as well as a lesson from a Japanese friend and here it is for you! 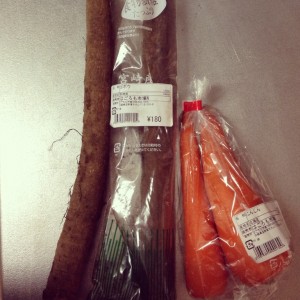 Wash the gobo well, then snap it in half with your hands; it’s easier to work with this way. Gobo oxidizes quickly so you’ll submerge it in water after it’s been sliced. Use a vegetable peeler to remove the skin, working with one piece at a time. Use the ends of the gobo as a handle and either with the vegetable peeler or a knife, slice in a circular direction around the root. (Bonus! You get to practice your whittling skills with this recipe!) You can do this directly over a large bowl of water. 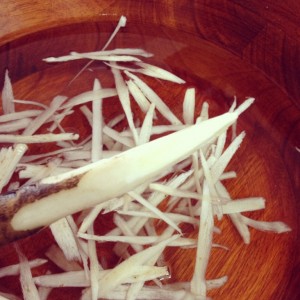 Once it’s all sliced and bathing in the water, peel the carrot the same way. 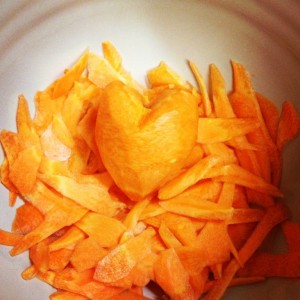 Heat the ghee in a large skillet. Rinse the gobo, then transfer it to the hot pan along with the carrots. Sauté this for about 3-5 minutes; when it starts feeling like it’s sticking to the pan, add the soy sauce and mirin. 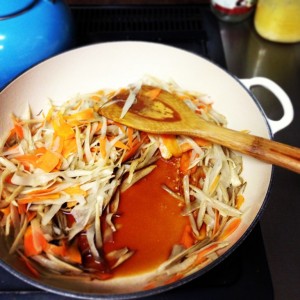 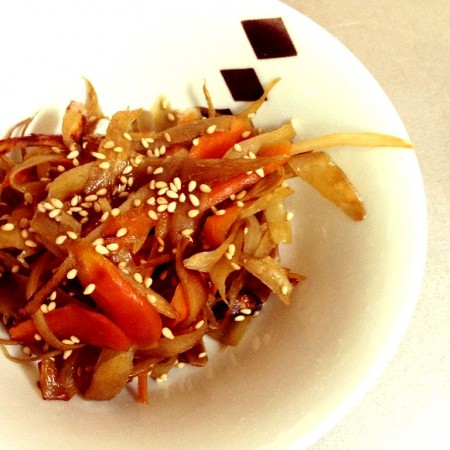