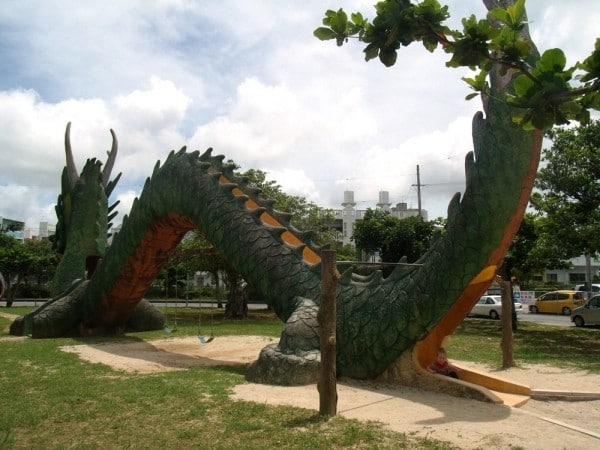 Have I mentioned how awesome Okinawa parks are?

Every once in a while, the kids and I find a park that doesn’t have much to it. Sometimes they aren’t overly excited about them (the kids have become park snobs!), while other times, one aspect of the park gets them more excited than anything.

I have no idea what the name of this park is, so we just refer to it as the Dragon Slide Park. That sums up the entire playground. The dragon sits in the middle of the park with his back arched. You climb the stairs up one side of him and slide down the other side, coming out of his mouth. With a slide this neat, the kids can play for hours.

The park also has a small (very small) jungle gym for the little kids, but not much else. There is shade and street parking. This park is also very close to the Pirate Ship Park (my post on that will appear September 18).

Directions: From Foster – Go out the Legion Gate, making a right at the light. Take the left at the light to stay on 330. You’ll be on 330 for a while. (You can also take the expressway to exit 2) After you pass exit 2 of the expressway, you’ll want to take a left onto 241. Pay attention because 330 actually goes over 241, so you’ll have to sorta exit 330.  Once you are on 241, go through 4 stoplights, then take a left on the first street after the fourth light. Take the second street on the left and you’ll run right into the park.

From any other base: Take the expressway, getting off at exit 2. Head south, towards Naha on 330. Almost immediately, you’ll want to sorta exit 330, so you can take a left on 241. Once you are on 241, go through 4 stoplights, then take a left on the first street after the fourth light. Take the second street on the left and you’ll run right into the park.