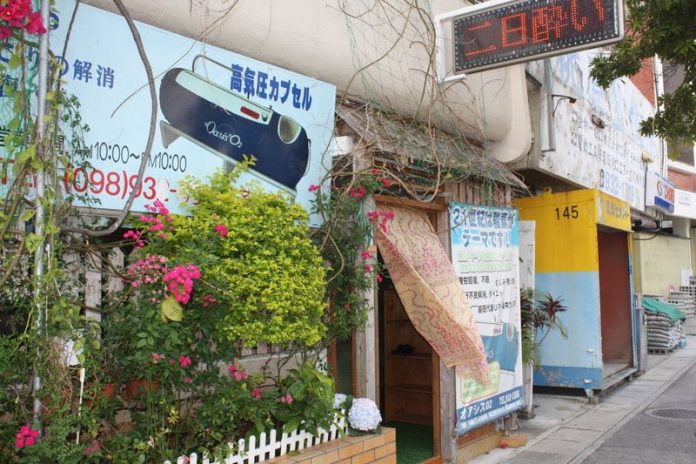 Years ago, when pictures of Michael Jackson sleeping peacefully, if not bizarrely, in an oxygen chamber hit the media, the American public simply passed off the “treatment” as just another wacky stunt from the late eccentric pop singer. However, what may be viewed as “on the fringe” in the States is actually a fairly common health practice in Japan. I was to learn this very fact one day as I discovered the oxygen pod in Okinawa.

It turns out that oxygen chambers have gained popularity as of late for all kinds of conditions such as achy muscles, poor memory, dull complexion, hangover and even serious diseases including diabetes, stroke, and cerebral palsy. In addition, if you have an important meeting this week and need an edge, no problem– hop into the tank. Has your lower back or shoulders been bothering you? The pod should do the trick.

So, what’s the theory behind this strange treatment?

Well, the basic idea is that the pod, known as a hyperbaric oxygen chamber, allows you to breathe in a cocktail of concentrated oxygen is good for your cells, good for your tissues and bones, good for your overall lucidity (although initially it might make you lightheaded). Normal air that we all breathe everyday has only about 20% oxygen; however, our bodies absorb more inside due to the pressurized chamber.

It costs about 1,000 yen and yes, readers– you have to climb inside a tank, get zipped up tight, and stay inside for about an hour. There is a call button inside if you get antsy, but otherwise, you can’t sit up and let yourself out. incidentally you can work on your laptop and talk on your cell phone, but it’s not for anyone prone to claustrophobia! That said, the procedure does seem to be worthwhile for professional athletes the likes of David Beckham, and patients who undergo the therapy by doctor recommendation.

So, how was my experience with the oxygen chamber? Much like some of my other off the beaten track escapades here, I thought of as kind of a funny story I could tell (remember the fortune teller?), but locals do take it seriously. On the day I went, two people got out of chambers when I arrived, and after my session, there were people waiting to go in. Overall, the time passed quickly and though I was sleepy afterwards, I felt somewhat revived. What I did appreciate was the tea and donuts they fed me afterwards.

However, I wish not to dissuade any reader of this unique cultural experience. A quick online search revealed that benefits of these chambers are being confirmed by patients and doctors more and more.

So, if you start to feel stress with holiday season approaching, you just might be able to melt it away inside the oxygen chamber.

To get there: It is on Route 24. Take the 330 north as if you were going to Plaza Shopping Center. Turn left on the 85 and drive past Plaza Housing. Continue straight and turn left at the 24. Go about 3 blocks. You will see the Tuna House restaurant on the left side and the Oxygen Pod place on the left across the street. Hours are 10:00 am to 10:00 pm.