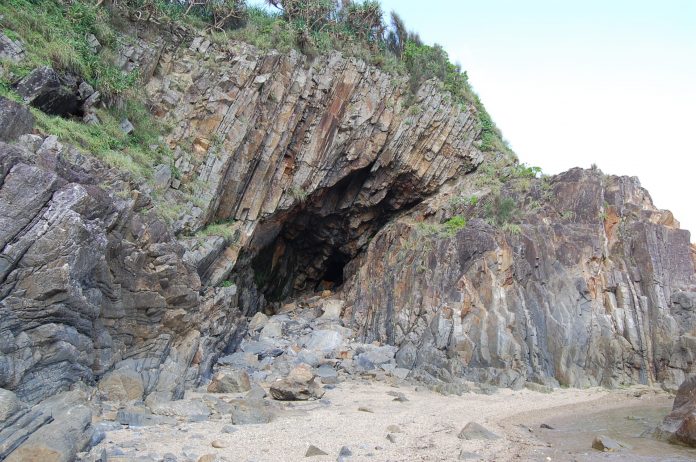 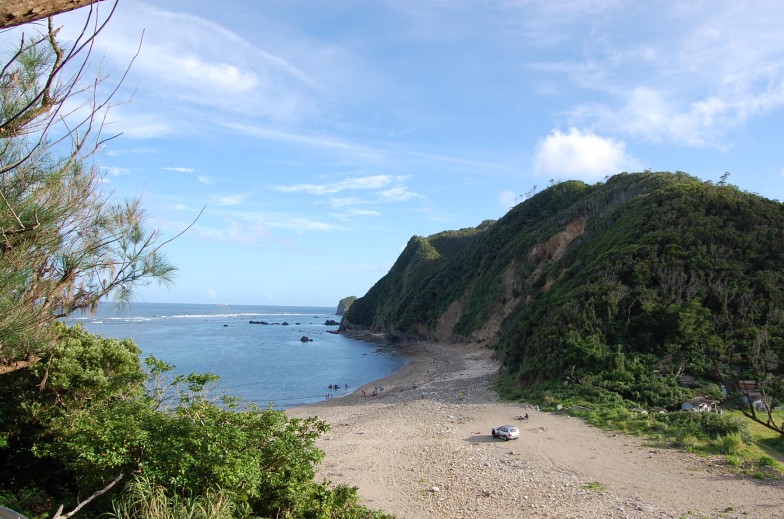 Along the northeastern coastline of Okinawa, dotted by sleepy fishing villages and occasional signs pointing tourists towards secluded cafes, sit a unique group of rock outcroppings fifty-four to thirty-seven millions of years old called the Fold of the Kayo Formation. 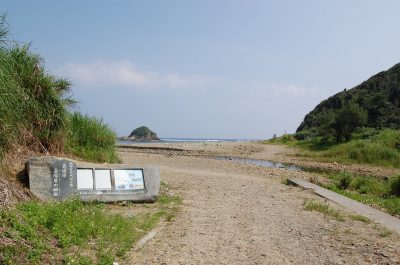 The Fold of the Kayo Formation was designated by the Japanese government as a Natural Monument September 19, 2012. The “fold” refers to layers of sandstone rock that dip and rise noticeably and quite erratically along a stretch of beach and highway in Teniya, Okinawa. One does not necessarily need to be a geologist in order to appreciate the significance of the area. These rock formations are unlike any you are bound to have come across on island before. 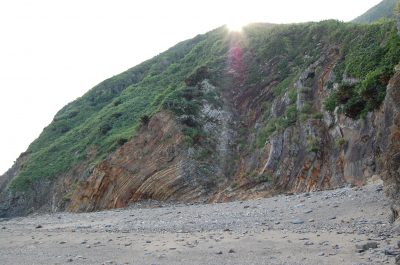 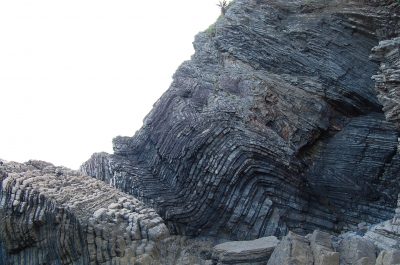 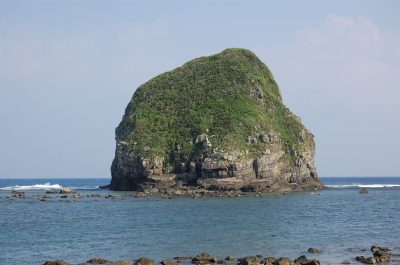 Beyond the rock formations are several “caves” where the sandstone has given way to gravity and tumbled out onto the beach.  In such spots, the rocks weep profusely with waters born from the Teniya River that flow from the mountainside.  This same river feeds two notable waterfalls near Teniya Beach’s entrance, and out into the area’s turquoise waters where Shark Fin rock formations may be easily spotted off in the distance as well. 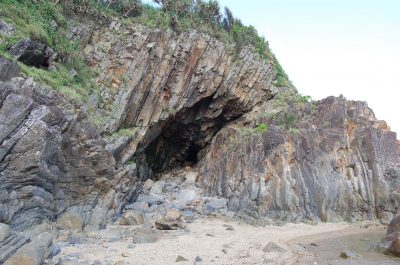 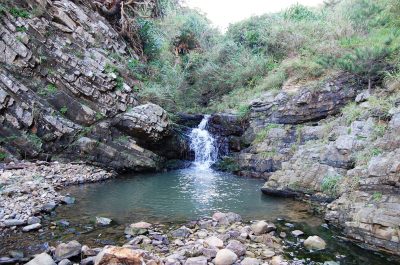 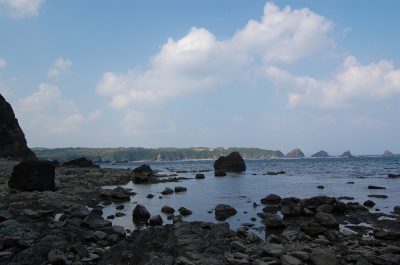 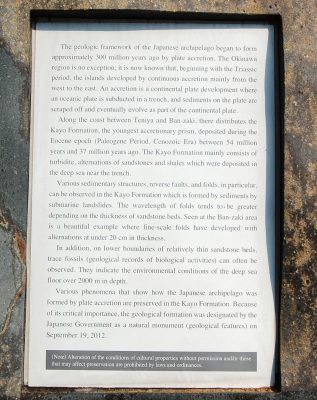 The placard placed near the beach entrance gives a better overview of the Fold of the Kayo Formation’s geological activity than this novice rock hound could ever hope to give readers. It is worth noting though that the placard highlights trace fossils in the rock formation.

I and my husband trekked a good three kilometers along the coastline looking for these trace fossils (particularly the “snake-like” ones we believed would be the easiest to spot) but were unable to find the specific rock outcropping illustrated in the placard. We did observe evidence of several significant landslides along the stretch of beach the trace fossils were supposed to have been.  And although we are not one-hundred-percent sure that we may have simply overlooked the area we should have been looking for them in, (I can only hope!) we feared the possibility that these trace fossils may have been swept away in one of the landslides.

However, all was not lost!  I managed to snap pictures of a few rocks I was lucky enough to have spotted on the beach that seemed to bear the characteristic “snake-like” pattern of the trace fossils we were looking for. 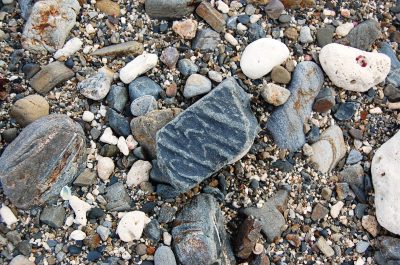 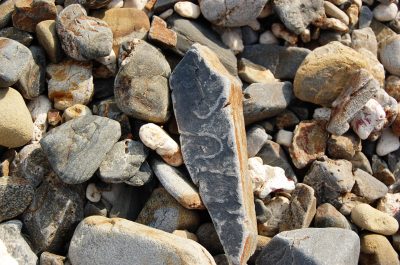 Directions: Travel north on the Okinawan Expressway to the 9 Exit and make a left onto Route 329. Once you have passed Camp Schwab take Route 331 towards Higashi through the Futami Bypass Tunnel. Keep straight along this road hugging the coastline and passing the Kanucha Resort. You will want to keep your eyes out for a set of white and blue signs that point to “Fold of the Kayo Formation” on the left side of the road. There will be two of these, but take note that each is merely a separate entrance to the same rock formation.  So if you happen to miss the first sign, be sure to look for the second sign immediately after you pass the 40 km road sign and park your vehicle near the road blocks that prevent thru traffic from disturbing the formation. 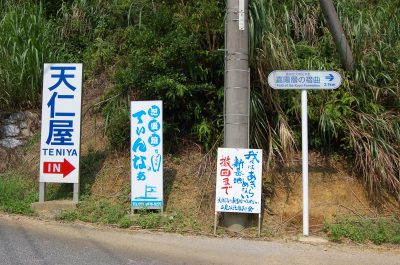 The third Fold of the Kayo Formation sign will be approximately half a kilometer down the road from the first two signs, but on the right. In addition to this sign there are other signs pointing to Teniya (at the time of this posting) that should help point you in the right direction. Follow this road straight. You will pass farmland, an old playground, and a small shrine. As you continue to travel along this road, you will notice that the road will come to the top of a hill and then curve back around steeply. Take the first left that you see as you come down this portion of the road. 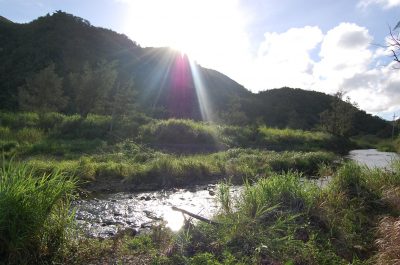 Additional notes: The beach area is mostly comprised of rocks (not sand) making the trek treacherous in places that a pair of flip flops would otherwise ruin your feet. Therefore, wear water booties or an old pair of trusty sneakers. Be aware of falling rock and slick algae growing on river and beach rocks. Pace yourself, and most importantly, bring someone along with you in case things get hairy. This is not a day trip that you want to go alone and wind up stranded. Nor is this a trip that families with small children should attempt lightly. Be aware of the tides!