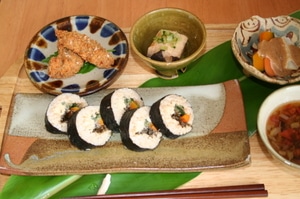 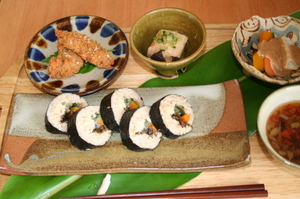 The festive season is quickly approaching and with it comes an atmosphere of jubilant anticipation, or for some, reservation as they ponder the number of calories they’re likely to gain! If you happen to be among those in the latter category, then this post may be of interest to you.

Ever heard of the Okinawan Diet? The diet that promises to get you leaner, healthier, and add many more years to your life? If you have, chances are that you’ve delved into it a little (or a lot), in the hopes of learning how to eat like your much slimmer Japanese friends and neighbors. But if you haven’t heard of it at all, it’s essentially a commercially promoted weight loss diet modeled on the foods typically eaten on a daily basis by older generation Okinawans.

Several decades ago, the Japanese Ministry of Health began to study older Okinawans, many of whom not only lived beyond the age of one hundred, but also lived relatively free of debilitating diseases. Intrigued by this phenomenon, a number of studies pursued, including one by researchers Bradley and Craig Willcox, and Makoto Suzuki. The results of their findings were eventually transformed into what is now known as the Okinawan Diet, or the Okinawan Program.

Adherents of the Okinawan Diet believe that they will be able to lose and maintain their weight, as well as improve their health and potentially add years to their lives. So what exactly is the Okinawan diet and how does one eat like an Okinawan? Check out the following Okinawa Diet Food Pyramid, and below that, some tips by ehow.com: 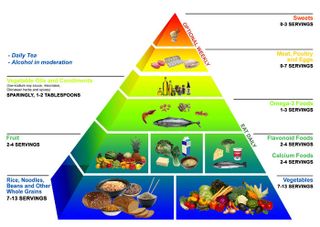 Compare with the USDA Food Pyramid to see how it differs

Step 1. Fill up on whole grains…….such as brown rice bulgar, oats, barley and buckwheat. Aim to eat 8 to 10 servings of whole grains a day.

Step 2. Try to eat a wide array of fruits and vegetables each day, choosing colorful ones that are rich in antioxidants…….Popular fruit and vegetable choices in Okinawa are cabbage, sweet potatoes, watermelon, bean sprouts, bitter melon (goya), and carrots.

Step 3. Eat heart-healthy foods that are rich in omega-3 fatty acids. Good sources include salmon, mackerel, and tuna. Other sources of omega-3s include flaxseed and walnuts…..Monounsaturated vegetable oils are other good fats to incorporate into your diet. These healthy fats come from sources such as olive, flaxseed and canola oil – the latter of which is commonly used in Okinawan cooking.

Step 5. Include in your diet bone-building, calcium-rich foods such as calcium-fortified soy milk and tofu as well as leafy-green vegetables such as spinach, kale or broccoli. Orange juice fortified with calcium is another good choice.

Step 6. Get fluids into your system….drink plenty of water……Green tea, jasmine and oolong tea are rich in disease-fighting flavanoids. Miso soup is another good way to get healthy nutrients in liquid form.

I don’t know what your thoughts are after reading these dietary tips, but I was feeling positive about them until I read about the “hara hachi bu” principle; that could well be the most difficult feat for me. Modifying my diet isn’t something I find terribly hard to do, but pushing food away when I’m not completely satisfied is like asking me to give up food altogether. Okay, maybe not that extreme, but I generally don’t stop eating until the hunger pangs have completely disappeared. I suppose I would be willing to give it a go however if it means that the odds of controlling my weight during the festive season might improve.

On a lighter note (no pun intended,) there is one final tip I’d like to leave you with, or rather a fun recommendation. Try taking the Blue Zones Vitality Compass test (www.bluezones.com/vitality-compass). The Blue Zones represent five world-wide regions where people supposedly live the longest and healthiest lives (Okinawa is a blue-zone region). The Vitality Compass estimates how many years you can expect to live, as well as how many years you should live free of major diseases. I took the test myself, just for my own amusement, and even though I was neither shocked or encouraged by the results, they have nevertheless given me something to think about, or should I say, more food for thought!