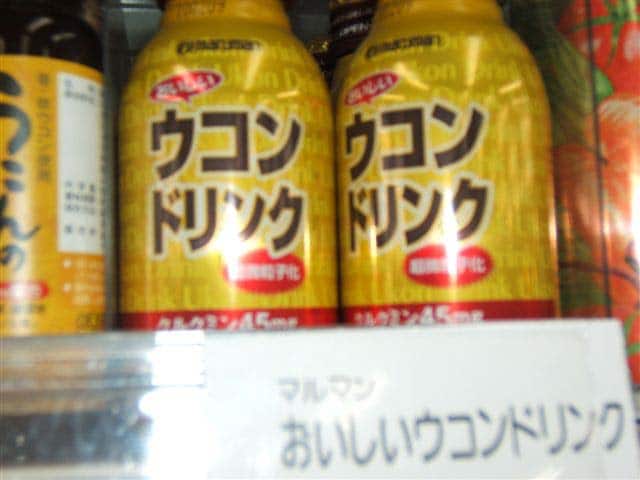 There is probably something offensive about a pregnant woman writing about a cure for hangovers. But, I am a sissy for being nauseous so I’ve thought of fellow porcelain worshipers out there as I have endured this (five month journey of hell). Misery DOES love good company. Anyhow, my information is not for pregnancy. It’s for all you out there who are enjoying life- and being “over served” at one of the many colorful establishments in Okinawa. With Oktoberfest on Foster, and Rocktoberfest impending, I thought I’d help you enjoy your drinking festivities, without paying such a heavy price the next day. So, Prost or Kampai– whichever suits you best!

Apparently, many Japanese take UKON tablets (or the drink) that you can get in your local konbini (Family Mart) store. The main ingredient is turmeric which is known for helping a variety of ailments. The dosage amount is dependent on which variation you take (so it’s best to grab a Japanese pal before indulging in your pre-prevention festivities). Author can not be held liable for dosage miscalculations.

One of my trustworthy students gave me her personal recommendations. Well, actually the entire class was geared up to converse. So here’s some collective thoughts on preventing those horrid hangovers. Indulge, partiers:

Takako says:  Well, yes I sure know about Ukon. Usually people drink Ukon before they start drinking alcohol. Some even mix Ukon with Saki too. Sometimes they drink it after or next day to help from the hangover. They actually have a pill type of Ukon and powder type too. Ukon helps liver to decompose alcohol so it does work.”

If you prefer your remedy to accompany dinner, may I suggest a simple recipe.

Mayo, lemon, ukon powder, and garlic powder. Mix. Apparently, it’s an “effective” remedy without the taste of UKON. And a good dressing to boot.

So readers, another challenge anxiously awaits you.

Have you tried UKON?

Did you take it before or after indulging?

Are you willing to give it a try and report back?

Or at least, it’s good bar conversation with your server.

(I found UKON at Kanehide, and it was located in the “vitamin section”). I had to write down the word UKON and show it to the cashier. Perhaps the half-Canadian in me was pronuncing it YUKON.