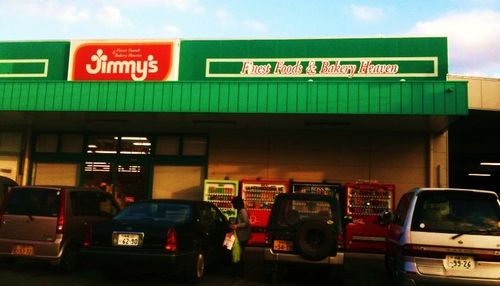 I’m sure you’ve seen a sign for Jimmy’s somewhere on the island, but if you are like me you may never have gone in! I live five minutes down the road from one and it took me a year to walk in their doors. But now I go every week.

I love their fresh baked bread — especially their big “Texas Style” bread pieces, which are great for making paninis.  And they’ve got a wide variety of cakes, pies, cookies, fruit cakes and other seasonal goodies.

And if you are wanting something other than the commissary cakes, check them out! They’ve got a Birthday Cake menu which helps you order the specifics of the cake you’d like made or you can just pick one from in the case.

Each Jimmy’s is a little different — carrying different items.  And most of the Jimmy’s I’ve seen are part of a grocery store, but I’ve never checked that part out because I’m really there for the bakery!

Website with information on a location near you can be found HERE.