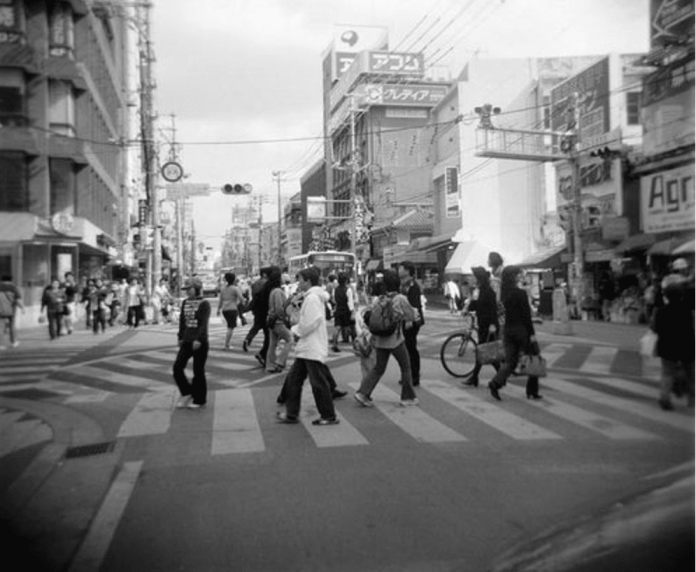 Today I dropped off Joe for yet another exciting work expedition in a foreign land. It’s such a downer, driving to the airport, mecca of travel adventure possibilities, depositing loved ones to go and have them (without you) and exiting the airport for continuation of mundane life routine.

But, this particular day was a Sunday and I didn’t have anything to do. And Sundays are the days that I like to hop in the car and just drive and see where I’ll end up, and what I’ll end up doing.

So, I left Joe at the airport and headed to Kokusai Street.

I’ve been to Kokusai Street several times before. It’s kind of the “Broadway” of Okinawa. Although, having moved from New York City to Okinawa, I have to admit that it’s somewhat of a stretch. It does have a Starbucks on it, but that, and that it’s a street are pretty much where the similarities end.

But, having lived in Okinawa for over a year now, Kokusai Street does, indeed, seem the happenin’ place to be. I decided to park my car and check out the little seedy side streets shooting off from Kokusai.

Being just a little bit before 10am (on Sunday remember), Kokusai Street had that slow morning after Saturday night drunken feel, where the only people up are hearty tourists, the odd shop owner, drunks, and people like me in search of … well, some kind of experience.

I checked my little Japanese change purse. I only had 1100 yen (about $10). I’d need a couple hundred at least to pay for parking. My experience would have to be cheap.

I passed the Starbuck’s and I admit, half longed to go in. Nothing like a jolt of caffeine to jump-start adventure. But I’d already had my “Coffee of the Day, Tall, Hot-o, Onegeishimasu”, at the Drive-thru Starbucks, so I moved on.

I decided to cross the street and stroll (with purpose mind you) up one of those seedy Sunday morning back alleys. It would bring me back to those good ole days of stumbling home through early morning developing country side streets in full go-out gear while people are going to church. Only it was about 10 am, and I wasn’t in a developing country, and I hadn’t been out all night (I got home at about 7:30pm last night… whew!) and the people weren’t going to church.

But, it kind of had that feel anyway. I remember it was on a vacation in Costa Rica (walking downtown on a Sunday morning on the “Broadway” of San Jose) that I began to draw comparisons between the developing nations of the world. There was that same kind of dirt and grime of the city streets, litter in the gutter. There was the morning sunshine, the awakening of the city. The sound of metal storefronts being lifted up. The self absorbed silence of people preparing to embark on a busy day: business women in still full makeup, uniformed schoolkids heading to school, shop owners sweeping their storefronts. The start of the hustle.

Okay, so maybe it’s not a developing nation thing. Maybe it’s a city thing. It’s the same in New York City as it is in Busan, Korea as it is in San Jose, Costa Rica, as it is in Naha, Okinawa, Japan. It’s gritty and grimy and somehow I like it. It reminds me of good times and being alive. And that’s how I felt this morning, exploring my little city.

I moved up the side street eager to see new things, curious eyes hidden behind my enormous sunglasses. Almost everything was closed and the odd bicyclist slid on past. I kept walking and the alley deposited me into a covered street market. I had been there before. Row upon row of shop selling almost the exact same thing, ceramic shisa lions, seaglass jewelry, weird Okinawan candies or bottles of awamori with habu snakes embalmed inside, pottery and hand-blown Okinawan glass. And of course the inevitable array of Chinese Cheap Stuff: plastic clocks, polyester old lady shirts, small uncomfortable-looking slippers and faux running waterfalls.

Anyhow, most of the shops were closed, so I kept on walking. This covered street market thing (just alleys covered with plastic roofing like you’d find on a shed) – I had thought it was just two long streets running parallel to one another. But today, I discovered it was a gigantic, incomprehensible maze. Alley after alley tumbling into one another, and they all looked the same. Eventually, I didn’t care what I saw, I just wanted out of the gloom and into the natural sunlight.

Finally, I made it out blinking into the light and was excited ’cause I’d ended up in a spot that I had never been to before…and I saw food! Trying out local foods is an essential part of any adventure, in my mind. I stopped at the nearest street-food stand. It had a lot of fried stuff in it, and I like fried stuff. I got the most familiar looking item. I was hungry and didn’t feel too adventurous, well at least when it came to satisfying my stomach. It was an Okinawan doughnut, only 30yen (like a quarter). It was greasy and good and the lady gave me a whole packet of tissues to clean my greasy fingers with. I crossed the street, doughnut in hand, to what looked to me like really old-timey, run down Asian buildings. You know, the kind with tiled sloped roofs. There were clothes drying between them, a little canal, people emptying crates of God-knows-what. Although the area looked old and foreign and therefore interesting, I began to feel really out of place, ’cause there were no apartments, or stores or any reason whatsoever for a sober gaijin like me to be wondering through there. So I just to continued to gnaw on my doughnut, cool-like, and moved on.

The next street led me to a park. Yes, a park! The most, sketchy, adventuresome of places…where random people approach you and propose any number of sordid and vile things. I decided to walk though. It was daylight, how terrible could it be? (I told myself, knowing just how terrible a day-lit park could be, especially a rundown one like this one.) I walked up a windy path to the peak of the hill and looked down.

Yes, the usual suspects. Woman reading newspaper…or is she? Man staring into space. Other man with bad shoes, doing something… I moved down the slope, there was some interesting activity below and I walked towards it. A cafe, perhaps?…No, it’s a glass blowing studio. But of course.

It was hot as hell there, and I was just on the periphery of the studio. Three or four people were inside, silently heating glass, blowing glass, shaping it and cutting it. I sat on a bench out front and watched, sweating, dear lord, I wanted to pull my shirt off.

An old man across the plaza where I sat gestured. I ignored. Who, me? He stood up and shuffled towards me, belt somewhat asunder. Yes, of course to me (magnet that I am for oddballs in parks.) He pointed to the glass blowers and beckoned me to stand up and look, really look at what they were doing. So, okay, I did. He mimed blowing glass. He flicked his hand to the blowers. Yes, indeed, they were blowing glass. He said, “okay…okay”, gestured, and shuffled back to his bench. I looked at the glass blowers, watching keenly (as instructed), looked toward the old man and smiled appreciatively, “arigato gozaimasu” and sat again.

The glass was very pretty, I admit. The man stood up again, approached me and the glass blowers, did some more gesturing. He was helping me out, sharing his knowledge. A glass blower turned around a wooden sign in Japanese. What did it say? “Finish”, the old man muttered and motioned to me to check out some other studio where they were making shisas.

But I didn’t go. I was hot. I felt fulfilled. I had had a cheap oily doughnut, walked through a sketchy park, had some strange old dude approach me, and witnessed some glass making.

Ahh… a perfect foreign country Sunday morning. (And I didn’t even have to step on an airplane.)