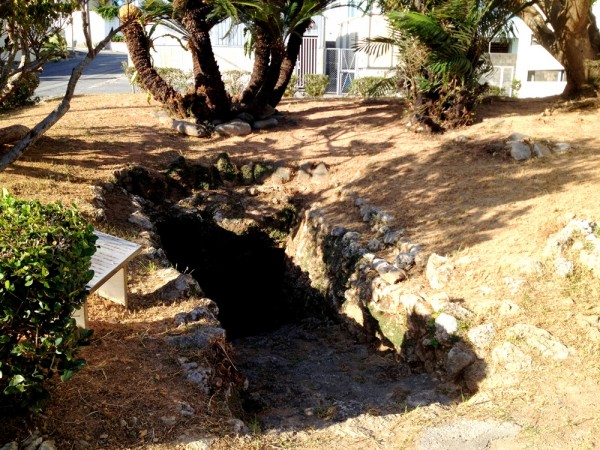 It never ceases to amaze me what things are hiding in plain sight, here in Okinawa. I have driven past this site hundreds of times, not knowing that this was here. In Urasoe, right next to a Pachinko and across the street from Arin Krin is the Makiminato Terabu Cave and Shrine. The legend with this cave is rich with emotion.

During the twelfth century, a Japanese samurai, Minamoto-no-Tametomo, was banished to an island called Izo Oshima and later washed ashore onto Okinawa. He married and had a son. Minatomo planned to return to mainland Japan with his wife and child, but was unable to leave with them. He set out on the voyage by himself, promising to return. The wife and child lived in a cave, called Terabu, as they waited for him to return.

The cave was located on a cliff near the ocean. His wife would often go to the edge of the cliff and watch the ocean for the return of her husband. He never would return.

The son’s name was Shunten, and it is believed that Shunten was the first king to unite the Ryukyu kingdom.

The locals call it Tirangama, which means the “temple cave.”  It is currently a sacred area in Makiminato, and there is a place for prayer called “Makiminato no Ben” inside the cave.

The cave isn’t very big, but there are places where grown adults can comfortably stand. This is a child-friendly cave. It isn’t deep and the floor is fairly level. The main part of the cave is pretty well-lit by natural light, but take flashlights with you to explore the rest of it.

From Kinser: Head north on the 58, stay in the far left lane. Turn left at the light before the bridge. Go just past the pachinko parking lot. You will see a large tree on the right. The cave is next to it. There is a place to park right next to the cave, which may or may not be roped off.

From Kadena gate one: Head south on the 58 past Foster and Futenma. As you approach the bridge, get in the far left lane. Do not go over the bridge, you need to go on the side of it. When you get to the other end of the bridge, turn right at the light. (Arin Krin will be at this intersection) Go just past the pachinko parking lot. You will see a large tree on the right. The cave is next to it. There is a place to park right next to the cave, which may or may not be roped off.