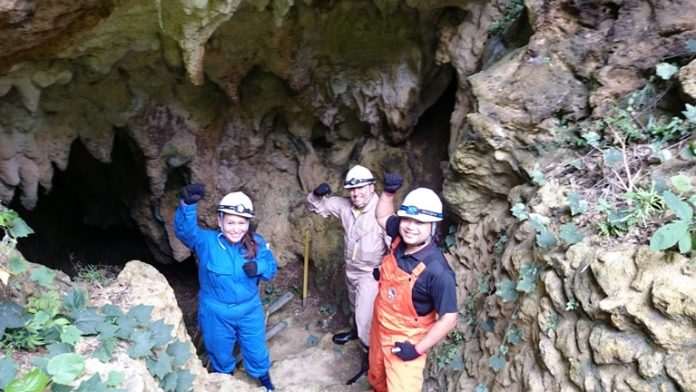 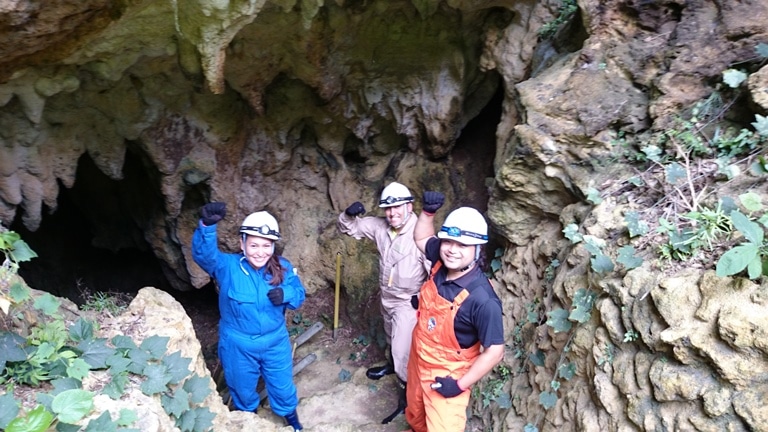 When we think of caves on Okinawa, most of us are familiar with the Gyokusendo Cave of Okinawa World in Nanjō-shi, situated along the island’s southeastern tip. However, it may surprise many of you to learn that there is just as an impressive cave system within Matsuda, Ginoza-son (between Camp Hansen and Camp Schwab) that will quite possibly rival any previous cave experiences you may have had before. 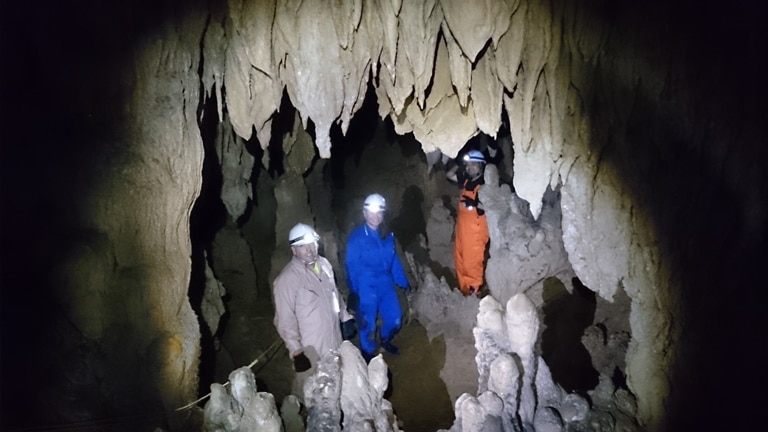 The Mēgā Gama Cave Tour offers visitors an opportunity to go spelunking with tour guides along a precarious but well-mapped area of cave that stretches one kilometer long and takes approximately one hour to complete. For a nominal fee of 500¥ (in addition to the regular admission fee) visitors are encouraged to rent a jumpsuit, boots, and gloves to protect one’s clothing and hands. However, if you are a cheapskate–like my husband–you may bring your own jumpsuit and boots to avoid the 500¥ fee.

Take some time though to consider that the consequence of wearing your own suit and boots is you have to travel with guano soiled clothing in your car that you are responsible for washing (or burning) at the end of the day, as opposed to having the Taiken Kouryu Center take care of that for you. Unless you require a jumpsuit that exceeds a Japanese size XXL, I would strongly advise you to rent your clothing from the Taiken Kouryu Center. The tour guides provide each visitor use of a hard hat and attached headlamp free of charge. They also provide a water bottle holder for you, should you wish to bring water along. 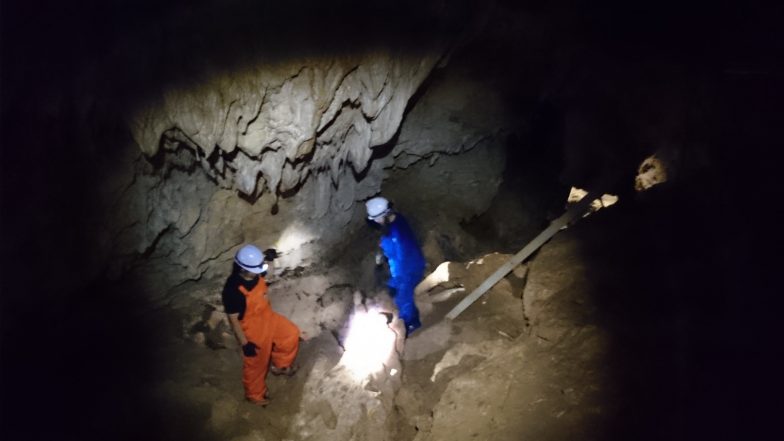 From the Taiken Kouryu Center parking lot our tour guides, Shinobu-san and Ken-san, led us on a short walk through a small residential area to the cave entrance. I cannot emphasize enough how access to the cave may only be attained by taking a tour. (The cave entrance is surrounded by fencing and a locked gate.)

Unlike Okinawa World’s Gyokusendo Cave, the Mēgā Gama Cave is not lit from within by harsh fluorescent lamps (although, there is emergency lighting wired throughout the cave path). This is to preserve the continued growth of the cave’s delicate limestone formations and the habitat of some of its rarer cave dwellers, such as Kuroiwa’s ground gecko (Goniurosaurus kuroiwae) and cave centipede (Thereuopoda clunifera). 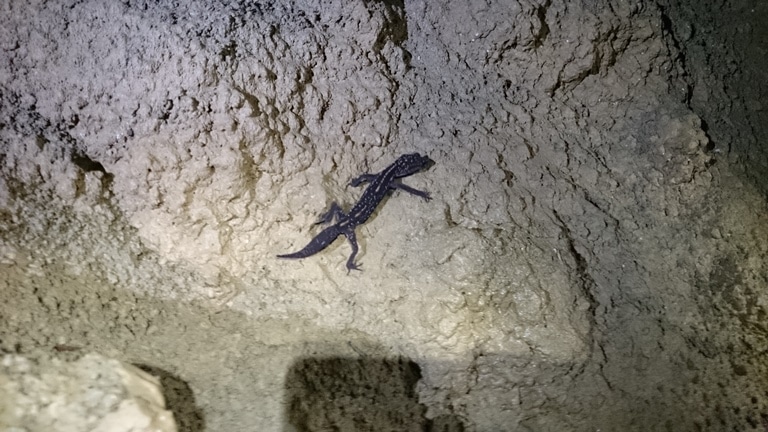 There are also small bats known as the lesser horseshoe bat (Rhinolophus cornutus) present in the cave. These are not the Okinawan fruit bats you are most likely familiar with. At one point during our tour, Shinobu-san shone a light up onto the cave ceiling and bats flew out in droves all around us, but never once bumped into anyone. Evidence that millions of years’ worth of bat echolocation evolution was still hard at work!

Visitors descend into the cave by means of a series of strategically placed ladders and limestone rocks. Even with boots on, your footing can easily slip on the rungs of the ladders if you choose to unwisely rush through the tour. 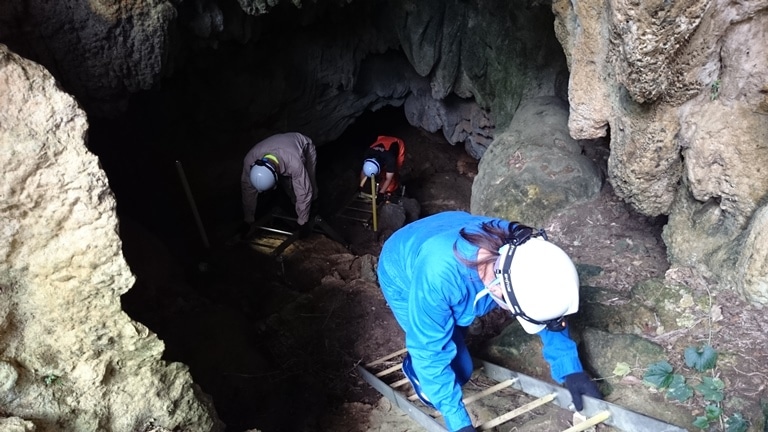 Though the tour is estimated to take only an hour’s worth of your time, your guides will encourage you to take as much time as needed for you to make your way through the cave. The tour guides’ patience with you is also demonstrated by their reminding you to duck under tight spots where stalactites obstruct your way. My own initial impatience got me knocked in the head a few times (I learned eventually)! Thankfully the hardhat I was provided with shielded me from any potential concussions I was sure to have suffered without one on—though, it did not shield me from embarrassment or my husband’s laughter! 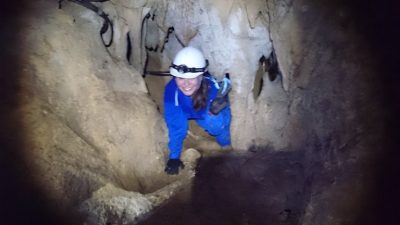 Along the tour route, you will spy remnants of human activity (e.g. writing, a copper pot, sake bottles, etc.) in the cave. Our tour guides informed us that during the Second World War, Okinawans from surrounding villages came to Matsuda and took refuge in the Mēgā Gama Cave away from the bombing and fighting taking place elsewhere on island.

Historians estimate that as many as fifty to one hundred thousand Okinawans hid in the cave for a period of several weeks during the war. Though no lives were lost in Matsuda due to combat and bombings, many people died of disease and starvation. However, since the end of the war the Mēgā Gama Cave–which has always played an integral part in the day to day lives of its people for centuries–stands as both a testament and a memorial representing the resilience of the Okinawans that took refuge in its caverns. 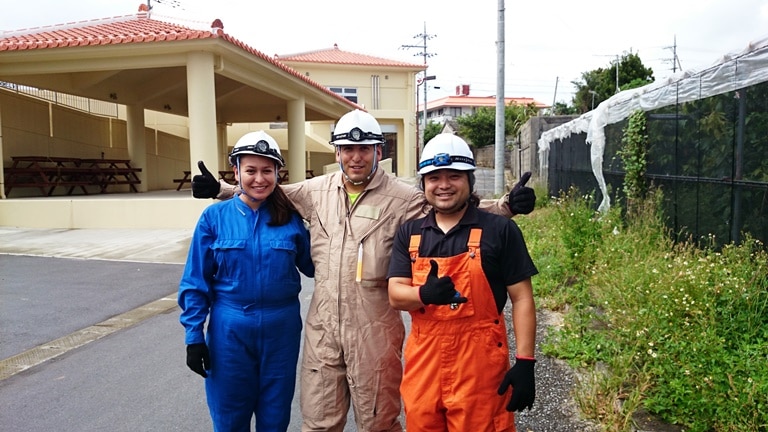 Directions: Driving north towards Nago on the Okinawa Expressway, exit the Ginoza 9 Toll Road and make a left onto Route 329. After passing Gallivant Bakery on the right hand side of the road, you will see a large blue billboard indicating that Highway 224 is up ahead within 300 m. This billboard serves only as a marker. (Do not take the 224 to Maehara!) Immediately after seeing this first billboard you will take a right onto the next street with a large outdoor bulletin board posted on the corner and a white street sign pointing the way towards the Taiken Kouryu Center. The Taiken Kouryu Center is the cheery yellow painted building with a red terracotta roof and flags posted outside. 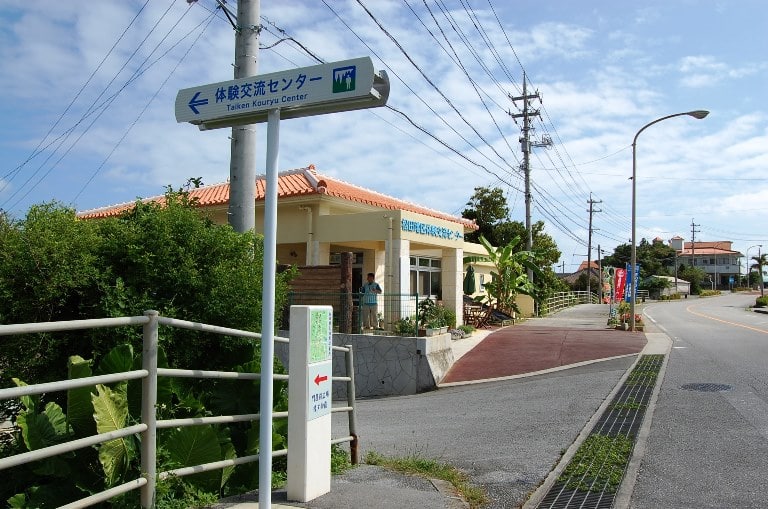 Parking: Visitors are asked to use the parking lot behind the Taiken Kouryu Center. Parking your vehicle along the narrow streets of this residential area is prohibited.

Tours are scheduled three times a day. Those times are 10:00 a.m., 1:00 p.m., and 3:00 p.m. It is imperative that you not be late to your tour appointment time and that if you are a non-Japanese speaker you reserve a tour through the Taiken Kouryu Center website a few days before you plan to visit.

Tour Reservation Website: https://ginozanavi.com/inquiry/  The first box you see on the form is for your name; the second box is for your cell number; and the third and fourth boxes ask for your email address twice. If the email addresses are not the same, the reservation will not go through. So be sure to check how you type your email address for accuracy! Finally, the large comment box at the bottom of the page is where you make your reservation request. Indicate the Mēgā Gama Cave Tour as the one you wish to go on. English is okay!

I would personally try to schedule a tour at least a couple of days—if not a week before—I plan to visit. This gives the English-speaking tour guide an opportunity to plan for your visit and comes at absolutely no additional cost to you. How about that! Ken Matsuda (the English-speaking tour guide) works for the Taiken Kouryu Center only part time. He owns Embroidery Rich (a medal mounting and name tape shop in Ginoza) and cannot leave his shop unattended on short notice. So please reserve your tour online beforehand.

Additional Notes: Due to high levels of humidity in the cave, visitors are advised not to bring cameras with them on the tour. This is not to say that you are forbidden to bring your camera to take pictures if you choose to do so, but merely as a warning that unless you have a professional grade waterproof camera, you risk ruining any electronic equipment you have on you. However, our guide was kind enough to take pictures of us during our tour with his own camera and provided us with a CD containing our pictures afterwards before we left the center. I cannot emphasize enough how accommodating and friendly the entire staff at Taiken Kouryu Center are! They are absolutely the best and go out of their way to answer all of your questions and even show you extra places along the tour route area not directly related to the cave. Matsuda is truly an amazing place to explore!