She tried. She really tried. And it didn’t work.

It’s not as if she didn’t have the skills. She had mad skills. She’d had the nerve to hitchhike across the U.S. and back at 19. She’d studied abroad in Ireland for a year. She’d moved to El Salvador after college and then to Korea and then Japan, teaching ESL and throwing herself into new situations and meeting new people as a matter of habit. She was so good at this, that a chance meeting with a handsome man at a Tokyo bar named Geronimo’s netted her a husband. Joe had been stationed overseas and as their relationship became more serious she moved with him to Pennsylvania for his next post.

At that point, she was thrown into the deep end and asked to tread water as a new wife, new mom, and to do it alone since Joe had deployed. She became best friends with her swimming dog, Maltsby.

And then she blinked and it was time for the next move — to Okinawa this time. Back to Japan where she was comfortable and loved things. She expected friends would fall into her lap, teaching jobs would appear magically, and their new little family would blissfully live out their term on Okinawa.

But the Westpac proved fertile ground and within weeks she discovered she was pregnant again and sick and the job that might have given structure to this new world was put to the side.

So out she went, like a good military spouse, to try to meet new people. She attended playgroups, smiled nicely, played well with others and even propositioned people in the produce aisle – but none of it seemed to work. There seemed to be a special code one needed to be able to fit in and she couldn’t crack it.

She was lonely. And jealous. Of Joe who seemed to be handed structure and friends and a “place” just by showing up to work. And of the seasoned military spouses who’d done this a million times and seemed to know how to maneuver the mysteries of PSCing.

In looking back, she thinks some of it might have been her fault. As a newbie to the military she didn’t think she would fit in. She also wasn’t a church or spouse-group kind of gal and so didn’t have those pre-made places to fit. And she wonders whether her newness to all things – marriage, momness & military — added to the confusion & insecurity visible on her face. And whether that might have been interpreted as desperation by those she met (and maybe they wouldn’t have been far off).

And so she turned to her faithful computer, which had sustained her so well during her time in PA. While Joe was deployed, she’d started her own blog – a place to document her pregnancy and her experience. Her first year on Okinawa is on there, too. The place she was able to describe the frustration of trying to make friends, the joy and craziness of watching her little boy and her belly grow and finally one day, she was able to write about a special meeting. Another chance encounter — this time at a playgroup neither woman belonged too, where she met Kaho. Her Okinawan savior.

Kaho was new to the island and had the wonderful advantage of being Japanese and speaking the language fluently. They became friends.

And they decided to do something about THE CODE.

They created a playgroup – Kinyobi Kids – which really had only one rule… everyone can come to play.

It had taken nearly a year for Meredith to stop trying to fit in and instead create her own place to fit. She stopped writing her own blog because she realized she’d been hiding there and depending on people thousands of miles away. She decided to begin investing time in the new people she was meeting through Kinyobi Kids.

After that things began to unfold naturally and quickly. On a phone call to her mom, Meredith was explaining how information on the island (restaurants, parks, etc) seemed guarded. She wanted to open things up so that everyone would know the secrets. So that everyone would have the keys to the mystery. Her mom suggested she start a blog to do just that.

The blog evolved later that year into Okinawa Hai! A website with multiple editors (many met at Kinyobi Kids) writing about all aspects of island life. A place where people just like her could come to read about their options, hear the voices of other’s experiences… eavesdrop on other’s lives and adventures in one soft and safe place. 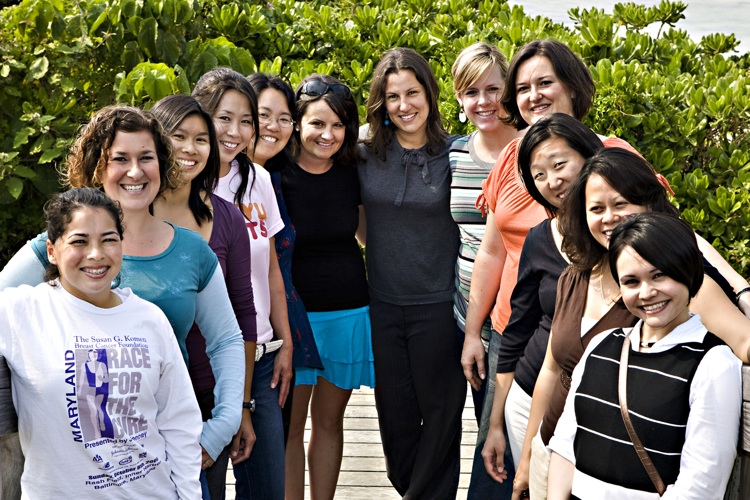 We had to say goodbye to Meredith back in June. She was finally going to get back to her REAL life. But as it turns out, she’s not going back. Her experience here, far from being a holding pattern for 3 years, turned out to be a life changing, course-altering experience. She won’t be going back to ESL teaching. She’s giving up all reasonable jobs for her love affair with the internet.

She encourages us all to be open to the possibility that what we pursue here really could change our lives… to look at Okinawa as a place to expand, grow, and become.

I asked if she had any closing thoughts for us all and she said, “Be bold and shameless in pursuing friends. It’s worse than dating, by far. But worth it.”