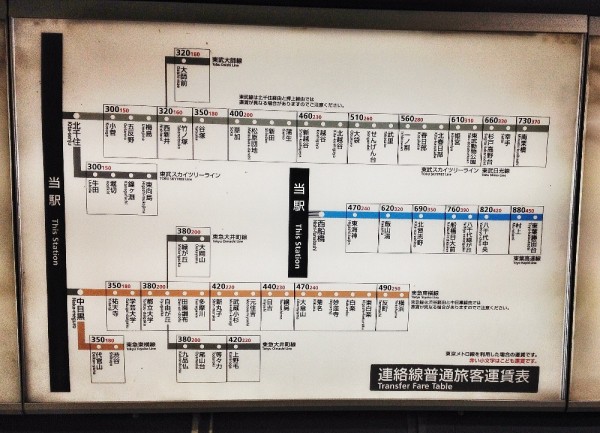 When we decided to go to Tokyo the first week in December, everyone we talked to and every tour guide we read said to use the Metro System to get around. But that was easier said than done. Even though we were able to grab an English metro guide at the first station, we still had to figure out how to purchase tickets and determine which lines and stops we needed.

Luckily, my husband is very resourceful and figured out that the Google Maps website will give you directions to all the different places you want to go via Metro or walking. There is also an App that can be downloaded for Google Maps that will allow you the same searches and will use GPS to determine your current location. This came in very handy, especially since we had our iPhones with us. Using the Google Maps App and our GPS location allowed us to venture out into Tokyo and wander around areas until we were done. Then my husband would locate the closest metro and we would find our way back.

At the metro stations, to purchase tickets you will want to know how much it will cost to get to your destination or line changes. The machines don’t show a destination, but instead show an amount. There are maps on the wall that show the routes and stops, but most of these are only in Japanese, you may luck out and find one that also shows English, but that is not common. The Google Maps App should show you an estimated fare rate that you can use. If you select the wrong amount there is a fare adjustment machine at each exit of the stations so you can either pay more or get a refund.

When you are at the machines the first thing you will want to do is touch the “English” button at the top right of the screen. The screen will change to English and you can follow the on-screen prompts. You will then want to touch the “Ticket” Button. Next you want to select your group configuration on the left-hand side of the screen. The group configurations will allow you to select an individual ticket or family ticket. Just select the button that matches your family. For us it was two adults and one child. The button will determine how much you pay; for example, a child ticket is less than adult. Next select the fare amount on the main screen, input your yen and out will pop your ticket.

Then starts the real fun of riding the metro. Be advised that during rush-hour times the trains get very packed and you will feel like a sardine, but taking the metro is the most efficient way to travel around Tokyo, especially if you are staying in the city. Once you figure out how to work the metro, you will have your ticket to explore Tokyo.