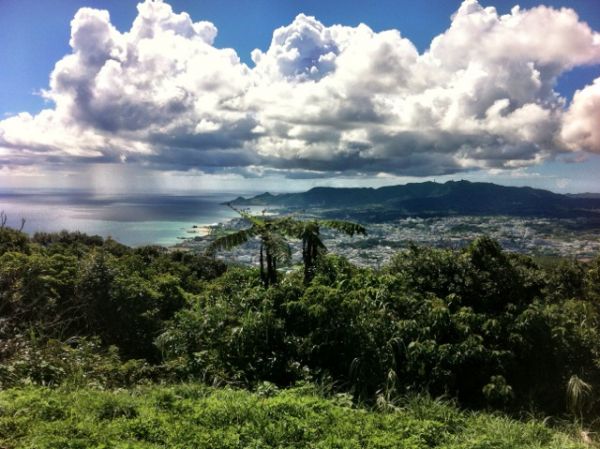 After reading about it and finally having a day nice enough for it, I decided to take a trip up Nago Mountain. What’s really cool about this mountain besides the view and the satisfaction of a good workout, is that is has more than one way to climb to the top.

However you approach Nago Mountain, you have to start from the upper levels of the beautiful and scenic Nago Central Park. You have the option of driving up to the observation decks or parking below and warming up by walking to them. The south entrance, near the Orion Beer Factory, will force you to walk due to some repair work along the road. Use the north entrance if you plan on driving to the trail entrance.

One way to enter the trail (the less noticeable) is located at the lower observation point. It is at the end of a what looks like a cricket field. At the start of the trail, you will see a sculpture of a foot and signs in Japanese pointing you towards the trail. The number you need to reference is either 11 or 13 (you’ll know what the numbers mean later).

The easier, yet riskier way to enter the trail is at the end of the Youth Summer Camp. There is a larger greenish multi-story building next to a large flat field, following the road and crossing another smaller field leads you to the beginning of the trail. Since I had a backpack and was quiet, and respectful, they let me pass by. The place is full of young kids camping who find it very amusing to exchange greetings in English. If you present the image of a harmless hiker and exchange friendly greetings, they let you pass by. There is a sign indicating that the area is private property.

Upon reaching the trail, either way you enter, you may see kids and their guides marching back, which in my mind, meant easy hike. Wrong! The trail from the youth camp begins over narrow cuts in the hills as you walk over sandbags covered in clay. It later levels out and then extends deep into the woods up and down series of steep stairs.

There are many forks in the trail since it is a massive network, but if you follow the signs the read 名護岳 “Nago-dake” or 名護山 “Nago-yama”, you will be fine. Expect a lot of pests along the route since most of the route is shaded under trees, but don’t let the shade fool you, it will be hot. Upon reaching the summit, roughly an hour and a half to two hours later, you get an almost 360 degree view of the Nago area. You will see both sides of the island, of course.

At the summit a long white pole marks the top along with another stone marker. You will also see the entrance to the other trail as well. Looking east, you can see Camp Schwab and the sea, looking west you can see Nago city, Kouri-jima and other nearby mountains.

Directions:  To reach this hike, drive north into Nago city via the Expressway or Highway 58. Upon entering the city you will see signs overhead for Nago Castle Park or Nago City Park, follow them to the roundabout with the tree and turn right. Across the street from the Orion Beer Factory is the South Entrance Parking lot. The North Entrance is found along Pref. Route 71.

Details:  Bring lots of water, sunscreen, snacks and bug repellent. Even though kids from the camp hike the trail, I wouldn’t recommend it for kids under 7 due to it’s length. And start this hike early since there is no lighting along it.