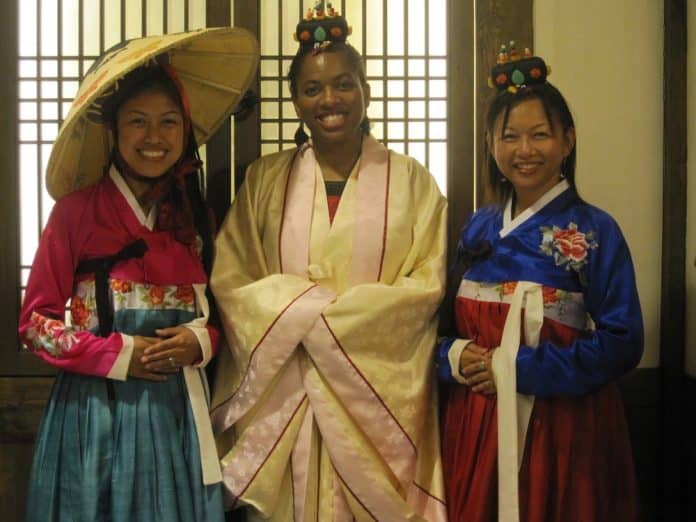 Heading to Korea anytime soon? If you are, make it a point to watch Miso and Nanta. When I took a trip to Seoul, Korea recently, I knew I had to watch some shows that I would usually skip if the kids were with me. I don’t mind watching shows with the kids, but with those performances, an “I need to use the potty,” or a bombing of questions would come about every few minutes. True, there are shows like Sesame Street Live where they’ll ‘hold it’ until the bitter end, but can you imagine my two-year-old watching Les Miserables or Madama Butterfly with me?

On this trip, my girlfriends and I watched plays called ‘Nanta’ and ‘Miso,’ both of which have been playing in Seoul for over ten years. When I asked our concierge at the Dragon Hill Lodge if the shows had English translations, she told me they were non-verbal plays. Both plays were $50 a ticket.

The first play we went to was Miso. This play has been running since 1997 and is one of Korea’s leading shows. Miso is basically a Korean version of Romeo and Juliet. The play started off with a huge screen explaining the plot of the play in different languages and thankfully, English was one of them. When you see this, though, don’t forget to pay attention and you’ll have to speed read a bit. The screen will appear again later in the play to interpret the words of a Korean song that’s being sung. This play was full of beautiful costumes and

dancing. Before the show, for about $4, you can experience what it’s like to wear a Korean traditional costume. We were the only Americans there when we went and we acted like true tourists, costumes and all. The others were Koreans visiting from other cities. Since we were the only ones taking advantage of dressing up, we took lots of pictures—groups, solos, different poses. Of course, the Koreans probably thought we were crazy, but it was a lot of fun.

The next show was called Nanta (translated to English it means ‘Cookin’). Nanta literally means to “strike relentlessly” and it reminded me of a medley of Blue Man Group, Stomp and Benihana’s. This show was a musical comedy with chefs using pots, pans, vegetables, sharp knives, cutting boards and brooms as instruments. Nanta is perfect for the whole family because of all the continuous action. Nanta was the first Asian show on Broadway. There was a lot of laughing going on throughout the whole show. They have this show in four different locations. Maybe watch this show after a big day of shopping. Ask the concierge for the closest Nanta Theatre to where you’ll be shopping. This show does sell-out rather quickly, so if you plan on watching it, make it a point to reserve some tickets as soon as you can.