While driving south on the 330, I briefly noticed a temple-like structure tucked away between some buildings. “What was that?!” At the time we could not stop to check it out. Last weekend we finally did and it was one of the most rewarding experiences I have ever had on Okinawa.

As soon as we walked into the temple, we were greeted by friendly temple workers and ushered to a side room so we could stow away our shoes. One of the workers showed us around the reception area that has a sitting area, where there was a table with wood pieces for visitors to write personal prayers. There were also pictures of the religion’s founder. 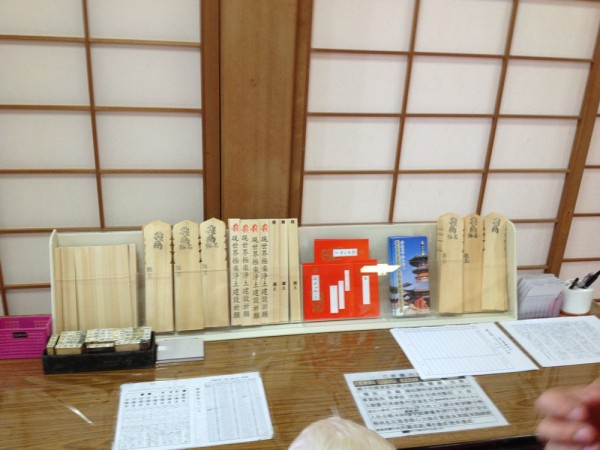 You are allowed to take pictures inside ONLY in this area. No pictures are allowed inside the prayer/worshipping room.

A worker guided us into the prayer room. It was beautiful and a spirit of peace filled the room. At the back of the room there is a large pot filled with clay, where burning sticks of incense are placed. Further into the room is the shrine and alter. We stayed on the prayer mat and did not go up to them. We didn’t ask if it was allowed and I feared what my children might do. The shrine is beautiful. All of the things inside it have been greatly cared for. As we were resting in the reception area, the workers brought snacks for the children and popsicles for all of us.

An English-speaking patron volunteered to tell us more about the religion and show us how to pray. The religion is called Nenpou Shinkyou. It was founded by Reigen Ogura in 1923. The spirit of Nenpou Shinkyou proclaims that all people throughout the world, regardless of religion, nationality or cultural background, should join hands in fellowship to build a world without conflict. Nenpou Shinkyou teaches the True Way in which we should live – the Goseikun. Nenpou Shinkyou’s mission is for people to bring these teachings into their lives, to practice them, and thereby create a better world for everyone, a world where each day is filled with joy. To pray, the patron kneels in front of the pot filled with clay, lights three incense sticks and places them in the clay. Each stick has a purpose:

After the incense is placed, the patron will pray. It was very cool to watch. The temple workers were very grateful that we took an interest in their temple and that we wanted to learn more about the culture, even though we are Christian and have different beliefs. We were the first Americans to visit the temple in years. It really meant a lot to them.

We kept our talking to a whisper inside the prayer room but a worker had a phone conversation in there.  I don’t think it is required to whisper but it does show respect. There is plenty of parking available inside the temple gates.

Directions: Heading south on the 330, you will pass gate 3 of Futenma, the 32 and Ginowan Memorial Hospital. Soon after the hospital, you will see on the right side of the road a Yoshinoya and a Docomo at a stop light. Make a right turn at this stop light. The road is small and directly after the Docomo. The road comes to a T intersection. Go right and you will see the Temple directly in front of you. If you miss the turn at the Docomo just make the next right turn.