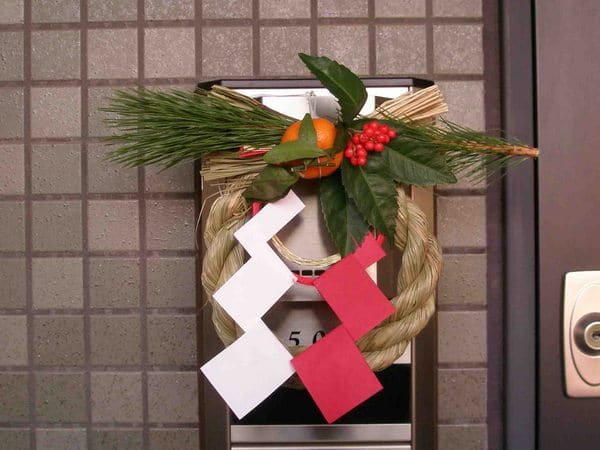 Most cultures have annual customs and celebrations revolving around the new year, and I thought I’d touch on some of the many traditions surrounding the new year in Okinawa, Japan, also known as Shogatsu!

Before the New Year in Okinawa, Japan

While most of the celebrations and traditions take place on New Year’s Eve and New Year’s Day, in Okinawa, some of them begin much earlier and continue well into the new year. For example, it’s customary to decorate a few days before the new year begins using kadomatsu (ornamental decorations to place outside the home or business) and shimekazari (wreaths that are hung above door posts) made of pine, rice straw, and/or bamboo. These also typically contain items that are considered to be auspicious, such as oranges (a way of symbolizing multiple generations and a long family line in Okinawa), or plum blossoms (symbolic of the spring to come and new life). 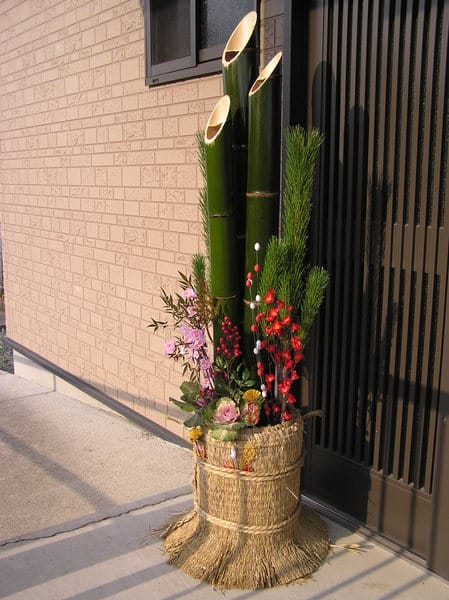 Another tradition that begins a bit before the actual new year in Okinawa is known as o-souji, which literally means “big cleaning.” Similar to the American “spring cleaning,” this is a time to purify one’s house and/or workspace to make them ready and fresh for the new year.

Before the new year arrives, it’s customary to send out nengajyo, or New Year’s cards. The post offices in Okinawa are often very busy during this time of year because of this, though apps and e-cards to make your own nengajyo are becoming more and more popular. The cards often have the zodiac animal for the new year in addition to wishes for prosperity and health. This is a wonderful way to let friends and family know that you’re thinking of them as the new year arrives, just as westerners often do during the Christmas/holiday season. 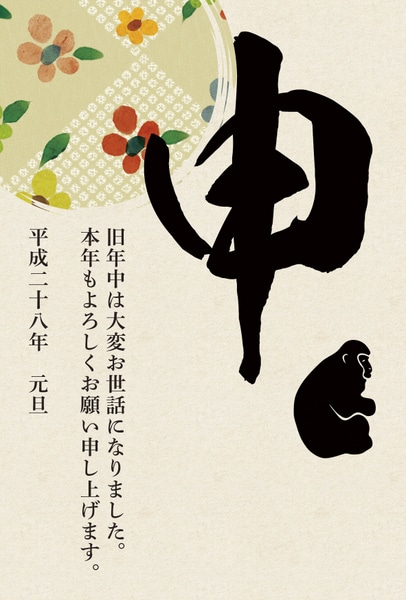 New Year’s Eve in Okinawa, Japan is a time for family and friends! Many may travel to their hometowns to be with family during this time, and others host parties and celebrations with food and games. There are a few popular television programs that air annually on New Year’s Eve as well! Some of these include Kohaku (a New Year’s Eve music show that divides popular musical artists into competing teams) and Gaki no Tsukai (a variety and comedy show that includes a segment where the participants are put into silly situations and must try not to laugh – if they laugh, they are hit on the behind with a bat, which often makes the rest of the participants laugh).

At midnight, it’s customary to visit a local shrine or temple to literally ring in the new year, in addition to giving thanks for the protection of the previous year and to pray for a prosperous year to come. The Buddhist temples ring the bells 108 times at the stroke of midnight to welcome the new year. Many Okinawans drink a cup of awamori to toast the new year and visit Shuri Castle for chohaigokishikia, a New Year ceremony with dancing and bright colors. 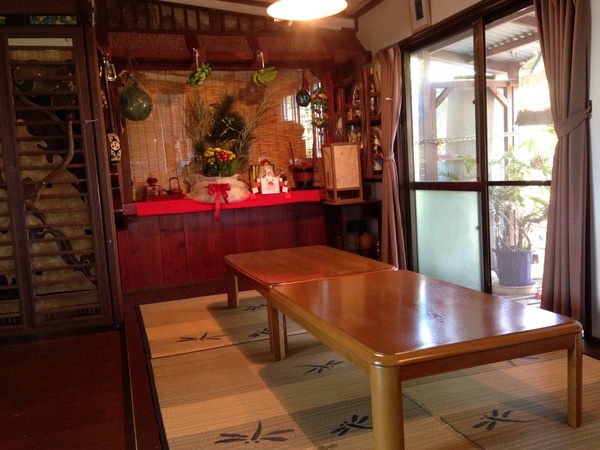 Hatsuhinode is the first sunrise of the year, and it’s customary to wake up early in order to watch the sun come up for the first time in the new year. Often, mountaintops and beaches are packed with people, as these locations offer beautiful views of the sunrise. We are lucky to live in Okinawa, because a beautiful view of the sun rising over the water is just minutes (and for some of us, seconds) away! 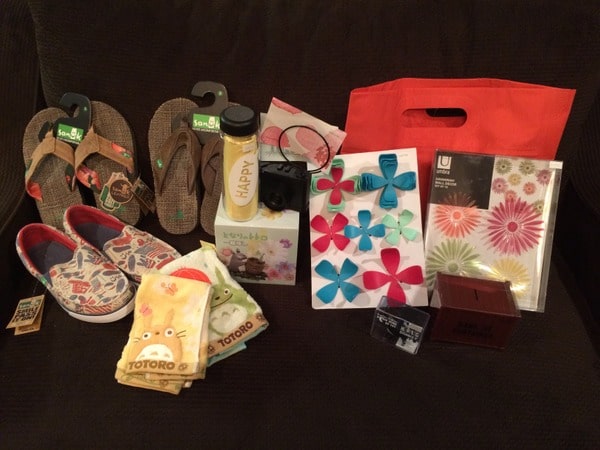 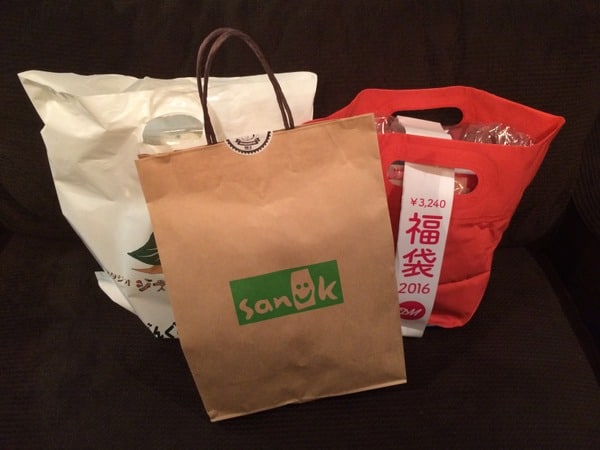 It’s a good thing there are several Starbucks shops nearby for an early morning energy boost because New Year’s Day is a huge day for shopping! Likened to Black Friday, January 1 is a good day to find deals at your favorite shops. While many shops offer store-wide discounts from January 1-5, one of the main draws during this time is known as fukubukuro. Fukubukuro is known as lucky bags – they are basically surprised bags with goods inside. Usually, the bags are sealed to keep the contents a secret, though basic descriptions are provided so you at least know the general type of product you’re purchasing. Sometimes, sample bags are even displayed so the purchaser has an idea of what to expect!

We’ve seen fukubukuro at grocery stores, bakeries, mall shops, and even designer suit stores! The bags range in price, depending on the shop and the contents. The price is set for each type of bag, but you won’t know what exactly you purchased until you unpack the contents after returning home. Typically, the bags have multiple items inside and the price you pay is a fraction of what you would have paid for the items separately. 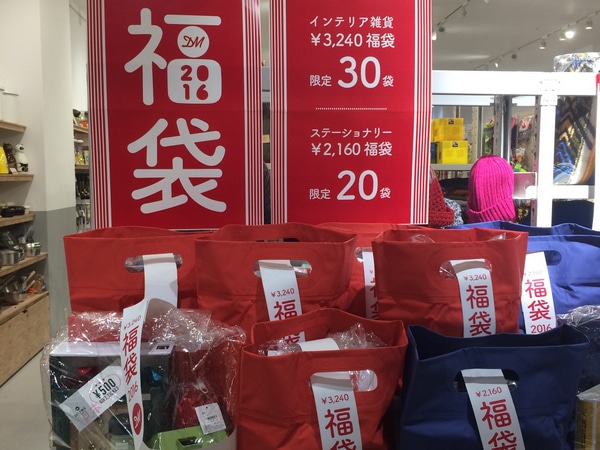 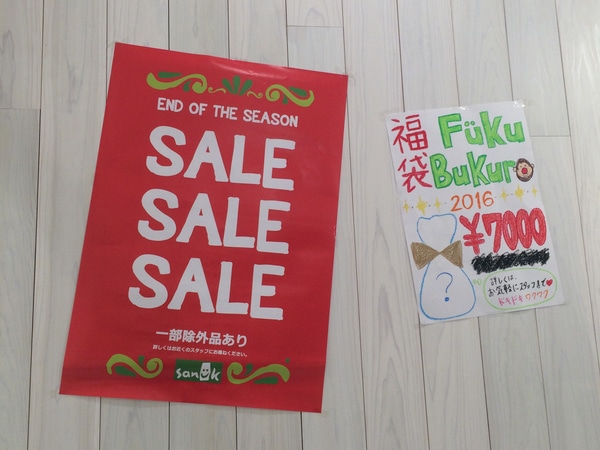 We really lucked out this year with what we bought! It’s exciting to have a mall nearby, and we found fukubukuro at many of our favorite shops. After purchasing a few lucky bags, we returned home to unwrap our surprises. We tallied up the total cost of what we spent versus the total worth of the items, and found that we only spent about 1/3 of the total worth! What a deal! 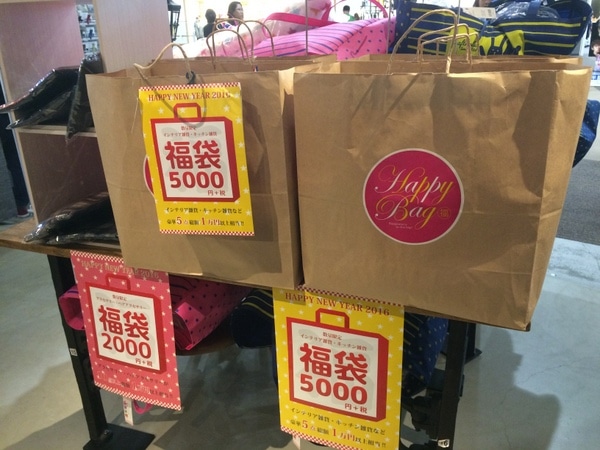 Fukubukuro goodies: great deals on some things we’ve been wanting for a while!

These are just a few of the many New Year’s traditions we’ve encountered so far in Japan, though I know there are several others! We wish you a happy new year, regardless of where you are and hope that you enjoy your annual customs and traditions!