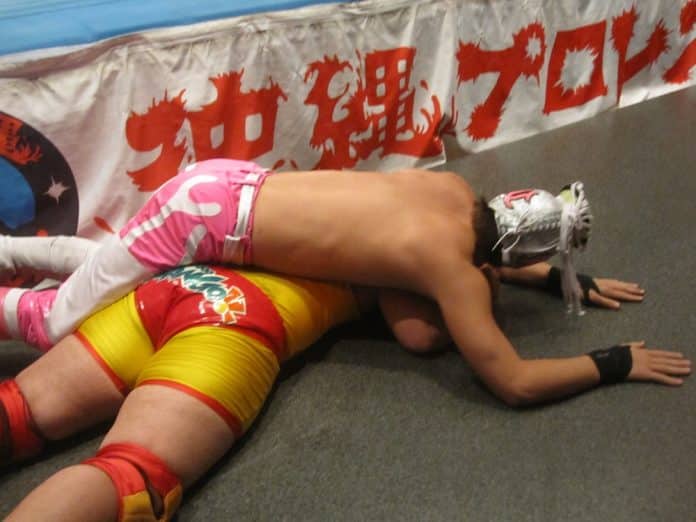 EDITOR’S NOTE: According to one of our readers: “Pro Wrestling is back on Okinawa under the name Ryukyu Dragon Pro Wrestling. Several of the wrestlers from the group that used to wrestle on Kokusai are now wrestling on the 3rd floor of Naval Kadena (located just past Seaside Ristorante on 58).” The post below reflects the show in its previous incarnation, but it’s our guess that all the fun and excitement is still there in this new form.

One-two-three! Ding-ding-ding-ding!!! I remember being in intermediate school, saving up my lunch money to buy wrestling magazines and praying that we didn’t have to do family things on days when I had to watch wrestling. The guys in my class loved my magazines and were amazed at how much I knew about the wrestlers and their moves. Okay, so some people told me it was fake. But I wasn’t buying it. I had dreams of being Miss Elizabeth, the beautiful manager who walked around demurely and had wrestlers fighting over her. To me, everything about wrestling had to be real. How on earth could people just ‘pretend’ to get beaten up? Of course, when WWF (later WWE) came to our city, my parents were not going to get me a ticket. But I did finally watch WWE live 20 years later with my husband and three-year-old (no longer a huge fan, but just wanted to experience it) and came to the conclusion that yes, it is indeed fake. ☹

Well, Father’s Day was coming up and for the first time in many years, I was at a loss at what to do to honor my awesome husband and father to my kids. We always try to do something fun, something crazy. My prayers were answered when I came across an Okinawa Living magazine with a bunch of Japanese wrestlers all dressed up on the front page. YES! That was going to be his present.

We went on the Saturday before Father’s Day and we loved every minute of it! We had such a great time. Although 99.8% of the show was in Japanese, it was awesome. You can not come here expecting to see a bunch of matches in an hour-and-a-half. There were wrestling matches, but it was also a comedy show, and concert all rolled up into one. I am pretty sure everything was choreographed, but I did see some wrestling moves that I had never seen before. I loved being able to explain to my five-year-old what some moves were and why certain things were happening. I felt so cool again as my son listened to my valuable expertise on the technicalities of the world of wrestling!

All the costumed wrestlers portrayed characters that had to do with Okinawa. There was the Habu Man, Mongoose Man, and Ultra Mango to name a few. When we got into the building, it seemed a little sketchy at first. However, get to the fifth floor, and things do get better. Don’t show up an hour before though, which is what we did. If you do, you’ll start worrying bit, because it will look as if you are in a deserted building. This place isn’t big at all. Both sides of the ring could seat 30 people—three rows of ten seats each. There was a section right in front of the ring that seated ten.

My husband loved it. Our whole family loved it. We had front row seats and laughed our night away. Although I bought our tickets from Lawson’s with the help of an English speaking employee, many people bought tickets right before the show.

Now what shall we do for Father’s Day next year?

Directions: From 58 just north of Kadena, take a left into the Naval Kadena complex (located just past Seaside Ristorante on 58). The show takes place on the 3rd floor of Naval Kadena.