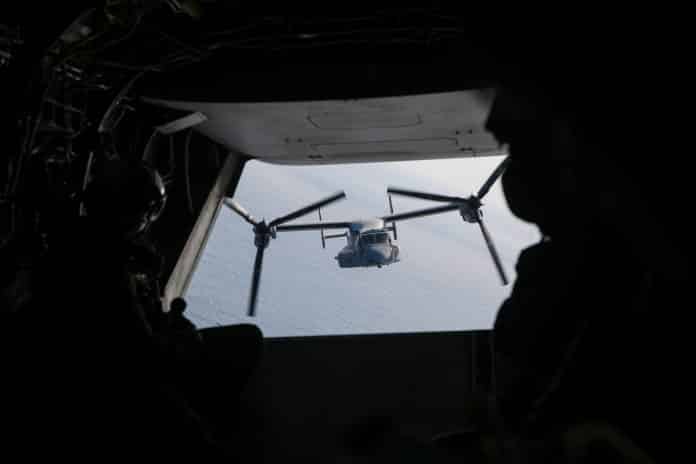 I remember the day pretty vividly, we had just moved to Okinawa and my husband and I were headed to an appointment at Naval Hospital. We were motioned to pull over to the side of the street and all of a sudden a very loud aircraft started to land in the baseball field. I looked up and asked my husband, “what the heck is that?” He laughed and said it was MV-22 Osprey, he had seen them down range but this was the closest he had been to one. It was loud, big and super impressive to look at. Over the course of a few minutes the aircraft landed, people disembarked and then it took off in VTO (Vertical Take Off) mode. That image stuck with me for a long time and being that we live on the east side of the island we see the Osprey fly over very frequently on their way up north to the training area. Sure, it is loud and sure, I still notice it when I am trying to put my daughter down for her morning nap. But, I can’t help but look up at the sky when it passes over and smile. What an amazing showcase of freedom. Right? 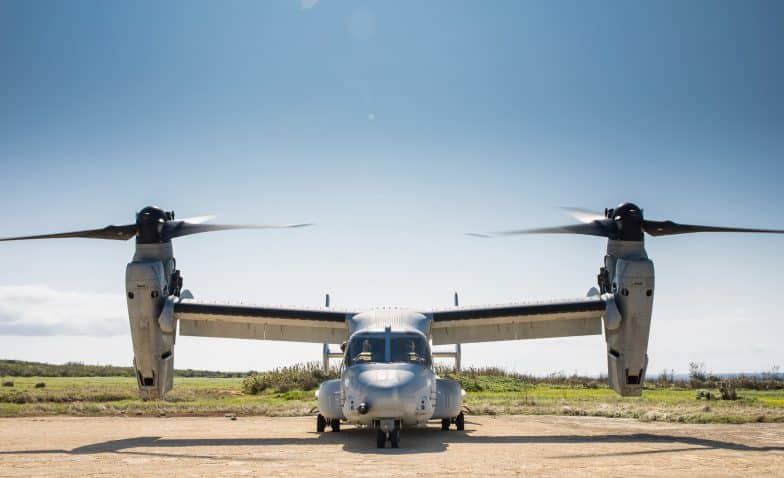 Little did I know, a year after seeing an Osprey for the very first time, I would get the opportunity to ride in one and document my experience. Myself, along with two other guys, were asked by Okinawa Hai to document the day. I would be writing and Pete and David would be documenting the flight though video and picture. 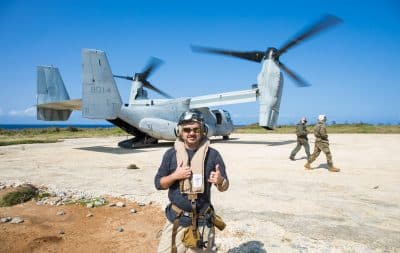 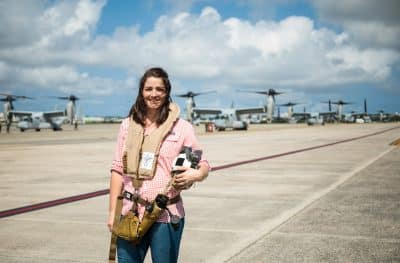 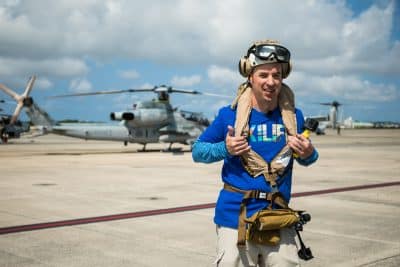 The Marine Medium Tiltrotor Squadron 262, better known as “The Flying Tigers” are stationed at Futenma. LtCol Garth W. Burnett was available throughout the day and right along with us. The day started by going over the safety protocol of the osprey and what all goes into making sure the aircraft is ready to fly. There was also a presentation that focused on the basics of the aircraft and how it is designed. From there we were handed our helmets, Oxygen belts, and vests. We suited up and headed out to the flight line. The Japanese media were able to ask some questions about safety protocol and the Osprey itself while waiting for the flight. 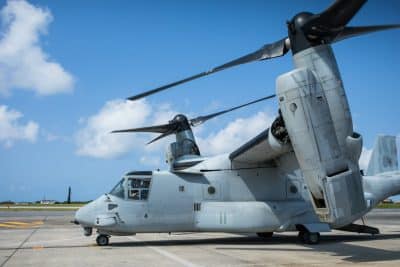 The flight started around 2:00 PM. The Osprey did a Vertical Take Off (VTO) and then immediately switched into airplane mode. Knowing that the ospreys usually fly right over our apartment in Awase, I gave my husband a heads up that we had taken off and he was actually able to see us fly over. So cool! It is hard to put into words how amazing of a flight this was. The aircraft itself is impressive and flying on it is unlike any other flight I have taken. It’s loud, of course, but you can feel how fast you are going by literally leaning towards the back of the plane. In the post-flight briefing, it was stated that they go about 275 nautical miles an hour. For take off the back doors remained closed, but as soon as we were over water they opened them up. We were able to see the other osprey behind us a few times and it was such a cool photo op. I can only imagine how humbling it is to be in there with your unit and see them on all sides of you. 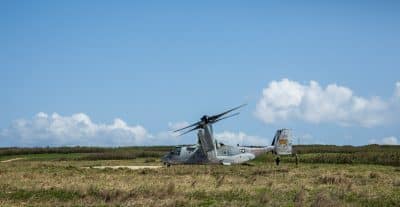 We were able to land on IE island at the IE Shima Training Facility. We spent about 10 minutes walking around, taking pictures and soaking up the area around us before re-boarding and heading back to Futenma.

It was so amazing to see Okinawa from the air. After we landed we had about 45 minutes of questions and a few last minute photo ops. David asked what this event meant to The Flying Tigers and why they felt it was important. The answer was simple, the pride that they have for the aircraft is huge and they wanted to share with the locals what it means to them. It was also an opportunity for the squadron to open up and share a bit about themselves with the media. 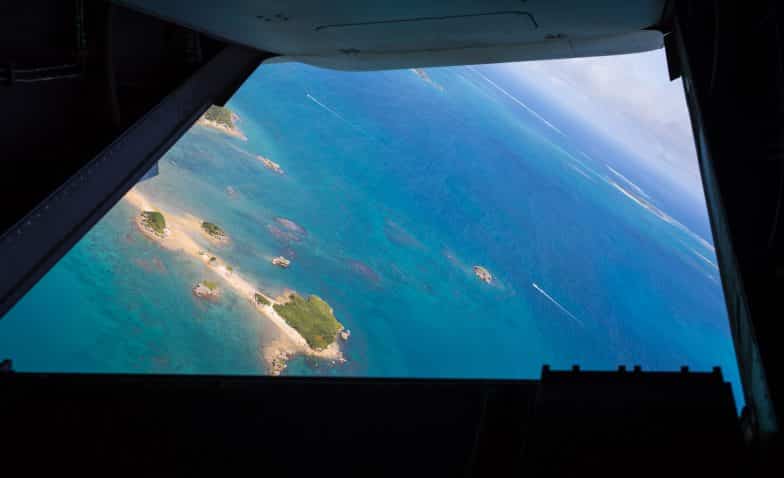 There are many locals who make it well known that they do not enjoy the noise pollution, the occasional debris falling and the even more rare situation of accidents that have involved the Osprey. One of the local reporters asked if it bothered them that the local media focus is on the negative aspects of the Osprey and the unit. The answer was that sure it bothers them. There is so much pride and so much work that the Flying Tigers put into their day to day actions that the squadron felt it was vital to show the local media what a common flight looks like from beginning to end. The safety briefings that happen, the flight paths that are spoken about, the team of maintenance guys that work so hard to get the aircraft off the ground safely. These are all things that happen on every single flight. After watching and reading some of the media’s stories following this event, I think it is clear that they were impressed and excited to share the day with locals. There were also quite a few questions about whether or not they do everything in their power to avoid flying over school zones. LtCol Burnett made it known that they do everything in their power to avoid those school zones, but of course sometimes things have to change due to training, weather and flight forecasts. This time after the flight was extremely helpful to give the media answers to some questions that the public had wanted answers to for some time. 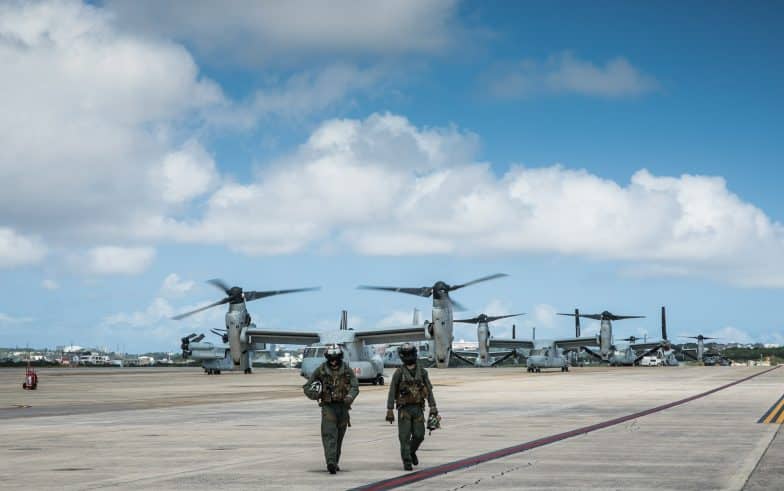 On the flight back to Futenma, I took the opportunity to put my phone and my camera down and really soak in the what the last few hours meant for me. “The Sound of Freedom” really is an amazing thing to hear on a daily basis, but actually riding on the Osprey and feeling it’s power was an amazing and humbling experience. Thank you to The Flying Tigers for hosting such a fun and important event. It is one that none of us will ever forget, I’m sure of it! 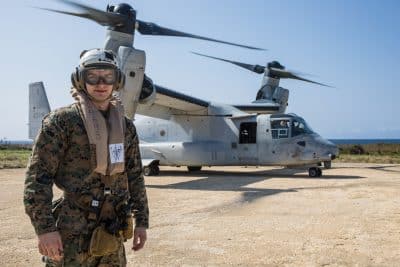