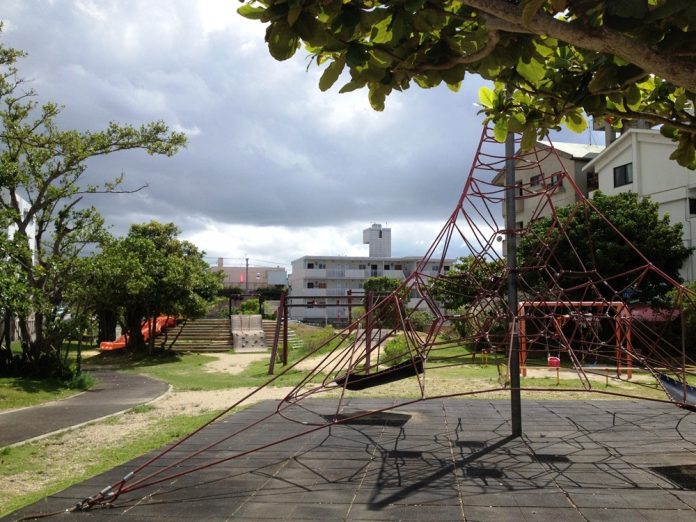 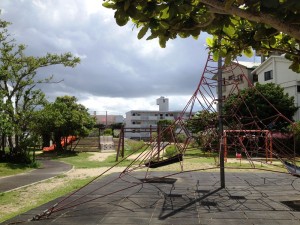 Soon after my son started attending a Japanese preschool, we discovered this playground right around the corner. The Omiya Park is a lot of fun for the kiddos. I really like this park because there are many different things to keep the children occupied. Starting from the south end of the park is a half-court basketball court, then a playground that is molded around the hill. This is where the elementary-age children will spend a great deal of their time. There is a wooden wall to climb, along with some slides and a zip line. The kids in the playgroups that I go with always end up sliding down the wooden wall and hanging by the guide rope. 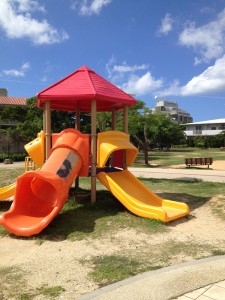 In the center of the park, next to a pair of swings is a pyramid-shaped rope jungle gym. Children have to inch their way along the ropes in order to pull themselves up to the next level. The climbing children will greatly enjoy this one. On each corner are rubber-platforms for the kids to start the initial climb up, but don’t be surprised if they turn it into a slide or try to bounce each other off!

The rest of the park has playground structure that is more geared towards toddlers and babies. It is a short playground with a few little slides. On the north end is an open dirt field perfect for sports activities. There is a track that goes around the perimeter of the park. It is common to see children on bikes riding along it as well.

Pigeons like to congregate in this park and even though there are signs that discourage feeding them, I have seen the locals bring bird feed for them. Be warned: if you choose to bring bird feed, or use your own snacks to feed the pigeons, they will flock to your feet. We watched an old man feed the birds and he must have done it often because as soon as he pulled the bird feed out of his bag, they literally swarmed him and were sitting on his arms and head. We sat on the ground close to him as he spread the feed. As long as the kids sat quietly, the pigeons walked next to us and even ate some food from our hands.

There is a bathroom and drinking fountain. Street parking only. Note: there is a fenced parking lot at the south end of the park but that is not for the park.

Directions: From Camp Kinser, exit out of gate one and go straight through the intersection. At the T-intersection with the 251, turn left. At the next light, turn left. Turn right at the next street. There is a fenced parking lot on the corner. The park is on your left.

From Camp Foster, drive south on the 58. After you see Camp Kinser on your right, look for the bridge that goes into Naha. Turn left at the second to last light before you can go onto the bridge. You will see a gate for Camp Kinser on the other side of the intersection. At the T-intersection with the 251, turn left. At the next light, turn left. Turn right at the next street. There is a fenced parking lot on the corner. The park is on your left.