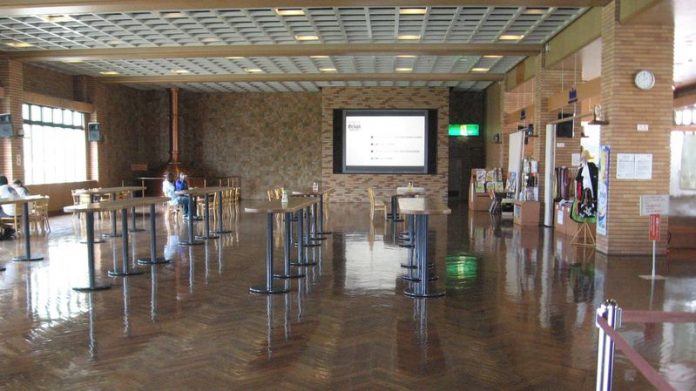 You can’t go far on Okinawa without bumping into Orion: Orion lanterns, Orion Fest, Orion shirts, and of course Orion beer! Orion (pronounced O-ree-on) is uniquely tied to Okinawa: Orion beer controls a majority share of beer consumption on Okinawa, while in mainland it is a distant fifth to the other bigger beer names. Ninety percent of Orion never leaves the island. Orion is made with Okinawan spring water that springs beneath the mountain behind the factory.

Orion was founded in 1957 during the American occupation. It started brewing a traditional German style beer, but the company’s popularity took off as the brew became a more American style beer. Recently Orion has looked to expand its market in mainland Japan and has partnered with Asahi brand for help with distribution. In return, the Orion factory also makes the Asahi beer for Okinawa.

We recently took a trip to Nago and decided to check out the Orion factory. It was a fun mini-tour and tasting. Don’t plan on it being the only thing you do in Nago, but it is a great partner with other sites such as the Nago Castle Park, Pineapple Park or on the way back from Okuma.

Upon entering the grounds, we were directed where to park and where to start the tour.  Parking is next to the giant beer storage towers. Later we were told that each tower can hold 10 million liters of beer. If you had a beer a day, it would take you 1,500 years to drink your way through one tower! We walked inside and registered. One person from each car was designated as the driver and wore a sign around his or her neck to show that he or she will not be having any beer samples. Everyone is given a ticket for free beverages later.

The guided tours are regularly available in Japanese. If you are with an English speaking large group you can call ahead and make arrangements for a guided English tour (number below). They also provide large laminated English written translations of the tour. You can either follow the tour guide or take the self guided tour, which we did. The tour overlooks the process of malting, milling, mashing, lautering, boiling, fermenting, conditioning, filtering, and packaging. There are both displays on the walls and large windows into the factory. At the end there are two displays with a history of the Orion cans and a display about how the packaging is recycled.

This piece of art is made out of Orion cans!

We finished the tour in factory guest hall. One wall shows Egyptian hieroglyphics of the beer making process and displays beer related accoutrements from around the world. At the counter you can turn in your tickets for beverages. Beer drinkers can have two pours and non beer drinkers are given their choice of soft drinks. We each got a package of Orion brand covered nuts – yummy! While we drank a large screen showed video about Orion. They seemed to have both Japanese and English version of the video. Adjacent to the beer hall is a gift shop where I finally got my Orion shirt: Orion, For Your Happy Time!

The Orion factory is open from 10:00 – 19:00 pm daily, but THE LAST TOUR (as of June 2014) IS AT 16:40. Guided tours in Japanese start every half hour with a break between 11:00am and 1:00pm. If you’d like to see the machines running, your best bet is to go during the week. If you have a large English-speaking group you should call ahead and line up a special tour a month in advance.

The Orion Factory also has a restaurant! It is open from 1000-1900 with last order at 1830. The menu features Okinawan specialties such as pork, goya, soba and, of course, Orion!

Website: www.orionbeer.co.jp is in Japanese, but has some interesting information when translated.

Directions:  Getting to the factory is easy. Travel north on 58 or take the expressway and get on 58 at the last exit. As you enter Nago you will pass an A&W and a McDonalds. Shortly after, on your left, will be a large pachinko place named Super Big One. Take a right at the next intersection, following the sign for Nago Castle and a museum. Drive past the San-A and the school. The Orion factory will be on your right.

I’ve saved the best part for last: the tour with samples is free! So “For your happy time” I hope you have a chance to enjoy this tour of “The beer of beers!”