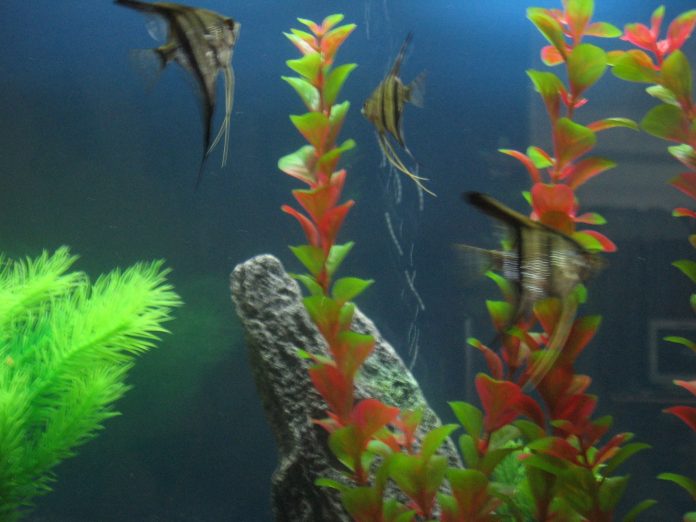 My youngest son likes lizards, dinosaurs, sharks, snakes and fish.  If its a hairless animal, he likes it. So this Christmas we decided to invest in an aquarium. Its a gift that wouldn’t get tossed to the side after a few weeks.

We purchased a basic aquarium kit from the BX that came with filter, heater and thermometer so that when we move back to the states, any replacement parts shouldn’t be hard to find.  (Not to mention, in case something wasn’t working, returning it wouldn’t be a problem.)  However, we found nice tank accessories at Pet Box.  Living in Japan during the holidays definitely has its benefits.  All of the stores are still open!  So we were able to surprise the boys on Christmas with a couple of new Angel Fish (also from Pet Box.)

We did our homework with the tank, proper set-up and how to treat the water for a freshwater aquarium.  However, we didn’t study up on the temperaments of fish.  I guess I thought there was a Fish Whisperer that did that.  Just two Angel Fish wasn’t a good idea. They tend to fight in order to show dominance.  So we went back and got two more and an algae eater.  (He’s adorable and my son calls him a “lizard fish.”)

They were very helpful in choosing our fish and we were able to exchange one of our Angel Fish who didn’t seem to be adapting well to the tank. Pet Box’s fish policy is nice in that you can exchange your fish within seven days for a new one if it seems to be sick.  All is happy now.   (Pet Box is directly in front of Jusco in Chatan, just off of the road that is adjacent to hwy 58.)

So to all of you aquaruim enthusiasts, what is your favorite store?