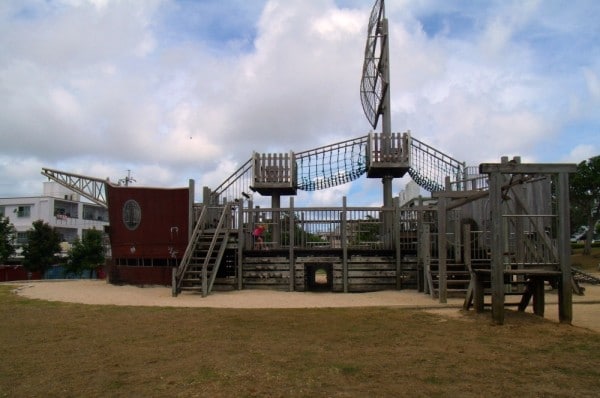 Not to be confused with the pirate ship at Araha Beach, this pirate ship is entirely different. I actually don’t know if you would call it a pirate ship, but that is what the kids say it is.

The park features a large wooden ship. There are lot of nets, stairs, a zip line, and other places to climb and explore on the ship. The best part was the little cart you sit on and then pull yourself to a different section of the ship.

The park also has two small slides. The bathroom looks like a giant crab!

There is street parking and vending machines. This is also right up the street from the Dragon Slide Park.

Directions: From Foster- Go out the Legion Gate, making a right at the light. Take the left at the light to stay on 330. You’ll be on 330 for a while. (You can also take the expressway to exit 2) After you pass exit 2 of the expressway, you’ll want to take a left onto 241. Pay attention because 330 actually goes over 241, so you’ll have to sorta exit 330.  Once you are on 241, take a left at the third stoplight. Take a left at the third intersection and you’ll see the park on the left.