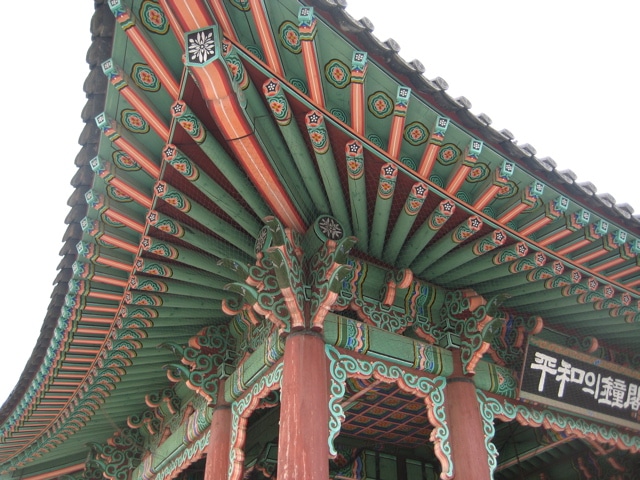 How did you travel?
We flew Asiana Airlines.  The flight was about 2.5 hours long. A roundtrip ticket cost about $450.

Accommodations: Both were perfectly reasonable.  Hotel Itaewon (where we spent 5 of the 6 nights) was centrally located in the lively Itaewon section of Seoul. I was traveling with two other adults, so as long as we were comfy, we were fine.  More important for us was the location of the hotel, which was great…walking distance to a plethora of restaurants and street life.

Other recommendations: I’ve heard that the Dragon Hill Lodge on Yongsan base is amazing, but it apparently books up quickly since we were unable to secure a room. It’s also cheaper than anything we could find.

Because we landed at the airport at 1:00am, and Seoul is over an hour from the airport, we figured that it would be best to stay in Incheon (the Airport district) on the first night, and then stay in Seoul for the remaining nights.  Our first hotel was The Hotel Incheon
Our second hotel was the Hotel Itaewon.

The Hotel Itaewon was located in Itaewon, which is the “foreign” part of Seoul.  That meant a wide variety of Irish pubs, Canadian bars, and Moroccan, Indian, Chinese, French and Italian eateries. We definitely ventured out to the more authentic “Korean” parts of town, like the Changgyeonggung Palace, and the Artist’s district of Insadong. But the beauty of traveling from Okinawa to Seoul was a taste of a metropolitan atmosphere. I didn’t realize just how much I missed real cities until I experienced the hustle and bustle of Seoul.  It’s like leaving the farm to go to the big city for the weekend.

Must Do/See: We took a tour of the Demilitarized Zone (DMZ) of the border between North Korea and South Korea.  You can arrange the tour through the Dragon Hill Inn on Yongsan base.  The tour cost $50 per person. It is about 4 hours, and maybe not the best for young children, but for those children old enough to write a social studies report, this is an absolute must see.

For those of you jonesing for some cultural influence, check out the Leeum Museum. Within walking distance of our hotel, this beautifully modern museum takes you from ancient Korean pottery all the way to video installation sculpture.

After being inundated by streetcarts brimming with knock-off purses, sunglasses and Beckham jerseys, cleanse your artistic palate in the artsy district of Insadong. Here you’ll find tiny shops with handmade papers, jewelry and pottery.  Don’t be afraid to cut back in a shady alleyway to find a good meal – the best authentic Korean meals are in the mom and pop holes-in-the-walls. “Bibimbap” is a western-friendly sizzling bowl of rice, veggies, egg and meat, offered in almost all the Korean restaurants. Also, for meat lovers, the Koran BBQ is as entertaining as it is filling.

Wish I’d skipped: I’m not much of a mall girl (although I am a true-to-life valley girl, free-falling right out of a Tom Petty song). Lotte World is the ultimate mall-rollercoaster-tourist extravaganza. Perhaps because it was our last day in Korea, perhaps because I had walked 150 miles in 6 days….by the time we got to the ice skating rink at Lotte World I was OVER IT. However, for those of you with children, I think most would find Lotte World more entertaining than the DMZ, so definitely check it out.

We couldn’t have made the trip without our Lonely Planet guidebook, purchased at the BX. They also have a very helpful website. And our Korean-American friends from the states were happy to give us lists of their favorite spots, so don’t forget to tap that resource.

Editor’s Note: In fall 2012 we created a sister site to Okinawa Hai… Korea Ye!  For a ton of helpful information about Seoul and South Korea, head over and take a look!