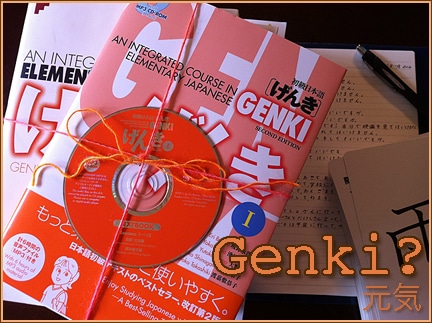 Now that New Year’s festivities have passed, hopefully we have all had a few weeks to come down from the excitement of the holidays and regain a little peace! If you are like me, you’ve made an extensive list of New Year’s resolutions, organized everything into smaller goals to be completed each month, and by March will most likely forget where you left the list and what all you had intended to accomplish…and revert back to old, bad habits.

Even if you have no intention of becoming fluent, learning some Japanese in this dragon year is a great resolution. Basic Japanese speaking and comprehension skills help to keep your mind and memory sharp, as well as better access more of Okinawa’s many amenities and rich culture. Undoubtedly, undertaking a new language is an intimidating task, especially deciding where to begin and what resources to use. If your Japanese ranges from a complete beginner to intermediate level, it is advantageous to have a textbook that will supplement what you may have already learned at base classes or by interacting off-base.

Genki is an acclaimed textbook produced by The Japan Times and is currently used in some of the University of Maryland Asia’s Japanese classes on base education centers. Genki’s two volume Japanese textbook series and corresponding workbooks were first published in 1999, but recently, a second edition has become available. Both editions are similar fundamentally, however, the second edition offers cultural information sections and a few content changes. While outmoded vocabulary and expressions have now been updated, I am still stuck with the first edition that shows its age with words such as VCR (ビデオ) and videotape (テープ)! Another noteworthy change is that the second edition comes with audio CDs in both the textbooks and workbooks, whereas the first edition sold the CDs separately.

Perhaps the best way to summarize the nature of the Genki series is information-packed. The new Genki I is divided into twelve chapters, Genki II has eleven, and both volumes are nearly four-hundred pages each. This gives students of Japanese, whether traditionally instructed or self taught, numerous benefits. After completing all twenty-three lessons, students should have a significant understanding of Japanese grammar and culture, as well as know approximately 1,700 vocabulary words and 317 kanji. Genki’s kanji are practical for many self-studiers since most of the characters are frequently seen in daily life here and are required knowledge for JLPT levels N5, N4, and N3.

The text’s abundance of information can also be a curse for independent learners who may quickly feel overloaded. The first two chapters immediately introduce hiragana and katakana, and by the third chapter, students dive into kanji. Each lesson also contains dialog, vocabulary, grammar, speaking exercises, reading, and writing sections. When I first began using the series last summer, starting a new chapter was always a daunting experience. I tend to be the sort of person who sees everything at once and struggles to break things down into more manageable increments. Wanting so much to learn everything I possibly could in one day of studying, I would arm myself with five cups of Earl Grey, annex half of the kitchen table, scatter my books and notebooks everywhere, and try to plow through almost all of the lesson’s activities in one afternoon – definitely a recipe for burn-out!

If you are trying to learn Japanese on your own and are wondering how relevant Genki’s content is to furthering your goals, Genki does have plenty of information that is useful for everyday life in Okinawa. For example, the first two chapters focus on survival Japanese: greetings, counting, telling time, and describing people. Subsequent chapters help build a useful inventory of phrases such as recounting daily activities, asking for permission, and explaining an illness. A plethora of food vocabulary is covered so ordering at restaurants becomes second nature. Asking for permission and understanding what can and cannot be done in certain situations is also an extremely beneficial ability to have. For example, whenever I visit any museum on the island, my first question is: shashin o totte mo ii desu ka? (is it okay to take pictures)?

Most of the fictional characters in Genki are college-aged since the book is widely used in Japanese university programs. Therefore, some of the vocabulary and situations are college specific, such as lists of majors, interacting with your host family and professors, and questions regarding homework and exams. This information may not be practical for self-learners, but its presence in the text is minimal and can be modified to apply to situations that are not academic. Although, it seems that the authors felt some dramatic tension was necessary to enliven the characters. Mary and Takeshi make a movie date in chapter three, however, Takeshi misunderstands and mistakenly waits for Mary at the Mos Burger instead of McDonalds. Mary spends the day alone sightseeing in Kyoto and is a bit edgy with Takeshi the next day at school! It almost makes you miss those years of adolescent drama. Almost.

Before running to the 100-yen store to buy key chain flashcards for vocabulary drills, self-studiers can use electronic flashcards through a free program called Anki (memorization). Other Genki students have already made vocabulary flashcard packs of the text’s vocab and kanji that can be downloaded immediately at the click of a mouse, for no charge. Anki uses algorithms to create a schedule of what to study and when, based on how quickly you respond to questions and how you rate their difficulty. This results in more efficient and faster learning. This is beneficial for independent studiers who spend much of their time figuring out how to learn Japanese and may end up learning little Japanese at all. With Anki, you save yourself countless hours of frustration, as well as a few trees.

As with many textbooks, Amazon.com is asking a small fortune for the new Genki volumes, costing around $150 for one textbook and workbook set. Amazon.co.jp offers a gentler price at 3,675円 per textbook, 1,680円 per workbook, but they only ship to Japanese addresses. Last summer, I spoke to the staff at Tuttle Book Store about ordering a first edition workbook to accompany my old textbook. Even though it was no longer available for them to order, they informed me that they had the second edition textbook on their shelves and were willing to reserve a copy of the new workbook. If you are a UMUC Asia student, you can purchase the textbook through webText for a similar price as Amazon.co.jp.