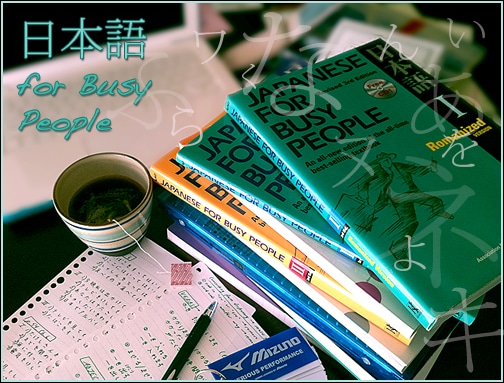 If the Japanese textbook Genki seems too intimidating, requiring too much of a financial or time commitment, the three volume series Japanese for Busy People may be a more practical choice. The Japanese for Busy People volumes are approximately thirty dollars or less, depending on where they are purchased. This textbook series is widely available on the island: it is frequently stocked in the Kadena BX and Foster PX bookshops, Miyawaki Shoten bookstores, and many copies are also available to check out at larger base libraries.

If you have taken an introductory Japanese course offered on base, perhaps you may already have a copy of the Japanese for Busy People text now collecting dust on your bookshelf. Shortly after moving to Okinawa, I purchased my copy when I took Japanese classes at the Kadena Airman and Family Readiness Center. My teacher had bumped me up from the lunchtime survival course to a level one class that met on Tuesday and Thursday nights.

“I am excited about learning, but sometimes I get so discouraged. I feel like Japanese is too difficult for me to learn,” I had confessed to her. “I’ve been listening to you in class, and you’re pronunciation is very good,” she had encouraged me. “Don’t stop studying Japanese.” Her kind words renewed my motivation. I took the textbook home, transferred the CD’s tracks to my computer, and began working through the first lesson’s exercises to prepare for class the following evening.

Japanese for Busy People’s comprehensive approach is possibly its strongest feature for independent studiers: almost everything you need is in one slim text. All three volumes contain an audio CD with the correct pronunciation of the dialogs and additional vocabulary words. The CD also helps build listening comprehension skills, something that many people teaching themselves a new language often lack unless they have frequent opportunities to interact with native speakers. As expected, the textbook explains key grammar points and concepts, and it also includes workbook-like exercises. Workbooks are also offered as supplements for each volume, however, the textbooks contain plenty of practice questions, so purchasing the workbook is not always necessary.

Japanese for Busy People I contains twenty-five short lessons, with an average of thirty vocabulary words or more per lesson. Vocabulary sections often include katakana loan words from English such as kechappu (ketchup), jazu (jazz) and kurasu (class), which are easily remembered. Each lesson also has short dialogs and one or two grammar notes, and workbook style questions are included in the text. The Japanese for Busy People series, especially volume I, does an excellent job at presenting information in easily digestible manner. Sukoshi tsusu or little by little, concepts and terms are introduced and revisited in greater depth in subsequent chapters. This is very encouraging for independent studiers who will feel like they are making substantial progress since most lessons are also short enough to finish in a week or less.

One minor downside to the first volume is the practice questions are in a repetitive follow the model format, which is not always engaging for self-studiers. For example, Lesson 24 has practice sentences for what Nakamura-san is good at, only replacing one word per sentence. This used to put me in an autopilot sort of trance as I answered questions (since it is a little difficult to get excited about what Ms. Nakamura is good at or what Mr. Smith received for his birthday):

I will admit that I would sometimes write out the “template” for each sentence first (Nakamura-san wa _______ ga jouzu desu) and then insert the key words after to save time. Any educators reading this article are now cringing, as this method is not very conducive to learning!

A few people that I have talked to who were once passionate about studying Japanese became discouraged and quit once they reached level II. I have heard a variety of reasons such as “Some people just have a gift for learning a language. If you don’t have it, you won’t get it.” Personally, I believe that independent studiers of any subject must first discover the individual way that they learn, their innate strengths and weaknesses, and adjust their study habits accordingly. Figuring all of this out will take plenty of trial an error, lots of growing pains stages that are not always pleasant to plow through, but then you will get it. For example, my strongest point is learning kanji, and without question, my weakest area is verbs. Even though I enjoy learning kanji and would rather focus on that every evening, I know that I have to allot more time for studying different verb forms. I have also found, through much trial, error, and frustration, that studying verb charts is more helpful to me than flashcards. Plus, most people would agree that an hour’s worth of conjugating produces soporific effects, without the nasty buzz from a Tylenol PM and cheaper than a glass of wine!

Lightheartedness aside, students who quit after volume I can make a strong case for their decision. Japanese for Busy People II and III are intimidating. The pace sharply accelerates: an average lesson may have over seventy vocabulary words, and each text covers over 1,000 new terms. In addition, students are tossed headfirst into at least ten kanji per lesson, as well as hiragana and katakana if they used the Romanized form of volume I. Luckily, if you intend to study Japanese at this level, there are strategies to help you avoid becoming too overwhelmed at levels II and III.

If you are not inclined whatsoever to tackle the Japanese writing system, the Japanese for Busy People website offers a Romanized text of volume II in PDF format. Currently, there is no Romanized PDF version for volume III. However, if you do want to learn how to read and write on some level, Japanese for Busy People I has a kana version that may be used instead of the Romanized version. The kana version will help you tackle hiragana and katakana right away, so both syllabaries should flow easily once it is time for the next book.

Generally speaking, the Japanese for Busy People series has a strong business focus. Many terms and expressions can be used in daily life in Okinawa, however, a significant portion of the sentences and dialogs are office specific such as discussing meetings, business trips, training programs, and expressing work-related stress (diving in Okinawa is suggested as a remedy)! This business theme is also reflected in the kanji found in volumes II and III. Some characters are frequently seen while driving or during daily interactions in Okinawa, like the kanji for left (左), right (右), and time (時). Others, however, are better suited to office situations, such as profit (利), discuss (議) and branch office (支社).

Students first learn a polite level of speech appropriate for an office setting but often too formal for common daily interactions. I have tried a few expressions from the text on native Japanese-speaking friends, and was surprised by their responses. I have a friend in particular whom I appreciate for his gentle honesty. For example, he came over to our home for Thanksgiving, brought his camera, and took many photographs of the cranberry coconut cake I served. Since I have celiac disease and my body responds adversely to all-purpose wheat flour, my baked goods usually do not have conventional textures or flavors. After the fuss he made about the cake’s presentation, he took one bite and blurted out, “Oh!! Umm…unexpected taste!” Being very polite, he ate the too sour cranberries and every crumb of the gritty coconut flour cake, then asked me if I wanted another slice. I shared his sentiments about the flavor and replied, “Iie, kekkou desu,” a textbook version of no thank you. “Kekkou…” he said. “That is a very nice word. Even Japanese children don’t know it. But people don’t really say that too often. I just say ii desu.”

Like Genki, there are free, downloadable Anki flashcard decks to help practice vocabulary. If the text is unavailable at local and base bookstores, check Amazon.com or Amazon.co.jp. Japanese for Busy People II is currently used in some of UMUC Asia’s elementary Japanese courses, so UMUC students can purchase the textbook through webText for $29.00.