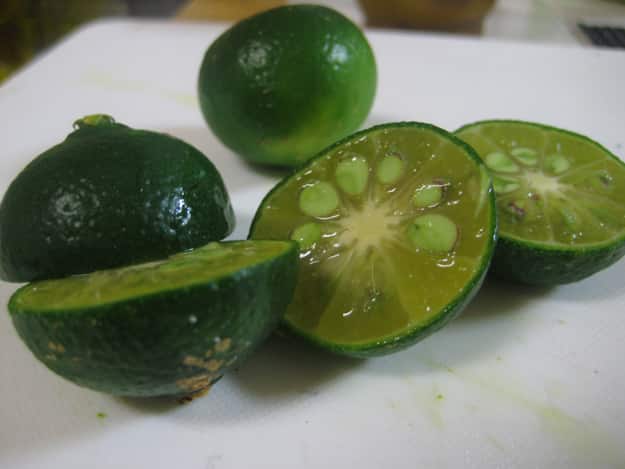 In September at the supermarket I noticed shikwasas available in large amounts, for very low prices. Their harvest season is normally late summer but you can find them at lower prices into the fall. When looking at the large bags for sale I was confounded; how are they used in such large amounts? They are so small and hard to handle I could not imagine juicing any more than five at a time. Additionally they can be so sour, would I even want juice anyhow? So I set out to try and use shikwasas in new and different ways.

First – what ARE they? シークヮーサー (romanized as shikwasa, shiquasa etc) are very small citrus fruits, about the size of a key lime. Their thin rind is green, they are packed with seeds and very very tart, but with an orangey flavor instead of lemon or lime acidity.

They originally came to Okinawa from the nearby country of Taiwan but are now very much a part of Okinawa. Said to be high in vitamin C and in nobiletin – which is thought to help control blood glucose levels and keep blood pressure low – shikwasas are often cited as a reason Okinawans live so long.

When I cut into them and smell the citrus scent I am almost immediately transported to the streets of Bangkok, a city I love. Perhaps you know why. In many areas of the city vendors juice those green oranges at little carts for the sweet nam som or orange juice sold in bottles for a pittance. The scent of the shikwasa is so similar to those oranges it is unreal. So smelling that early in the day makes my early mornings a little easier to swallow because I get to think about Bangkok.

I made an effort recently to think up seven different ways to use shikwasa. They ranged from exceedingly simple to somewhat complicated. Most are just re-imaginations of other recipes, so nothing too crazy. But hopefully this will get you thinking about using this special Okinawan ingredient in different ways.

When a friend from back home tweeted one morning he was making fruit salad, it got me thinking about a lime based dressing I used to make for my fruit salad. However, limes and lemons can be really expensive here, so I looked to the shikwasas as an alternative, and made my favorite citrus based syrup for the fruit salad.
• 1/4 cup of sugar
• 1/2 cup of water
• 2 tablespoons of shikwasa juice
• 1-2 tablespoons fresh mint
Combine sugar and water in a small pot, bringing it to a simmer on the stove over medium heat. Turn off once sugar has dissolved. In a small bowl combine shikwasa and mint, pouring sugar water mixture over mint and citrus juice. Makes approximately 3/4 cup of “dressing.” Pour by the tablespoon over freshly cut fruit to taste.

Nothing really earthshaking here, but you do not have to use shikwasa in completely complicated ways. I personally do not like drinking water. But living in Okinawa, you have to due to the heat. I have some packets of Crystal Light to help me get the water down in the amounts I need, but the artificial sweetener can give me a headache. So in the morning I squeezed one of the leftover shikwasas from making the fruit salad dressing into my water and it made it refreshing and crisp and easier to get down, and is not as harsh as lemon juice. Shikwasa juice is said to help control blood sugar and is credited with keeping aged Okinawans healthy.

• 2 tablespoons fresh shikwasa juice
• 2 tablespoons maple syrup
• 1 tablespoon cider vinegar
• 1 tablespoon canola oil
• salmon fillets
• salt and pepper to taste
Combine the ingredients in a small bowl. Brush over salmon and grill.
Since we got our little patio grill, my husband has been a gem and grills at least once a week. I cannot wait to try this glaze out on some of the delicious salmon available at the local farmer’s market.

This particular recipe was born of a desire to start taking advantage of the high quality inexpensive fish in the supermarket. It was my first time making ceviche at home, and I was quite pleased with the results.

• about 1 lb of whitefish – we used a mix of tai (red snapper) and hamachi or yellowtail. It was already sliced thinly by the supermarket as it was sashimi.
• Juice of 6 shikwasas
• Juice of 1 lemon
• 1 hot pepper, chopped finely (I used the Korean kochu pepper since that is all my supermarket routinely carries)
• half of an onion, thinly sliced
• 2 tablespoons chopped cilantro/coriander
• salt and pepper to taste
• pinch of cayenne pepper

Place fish in a non metal platter with a slight lip. Place onions on the fish. Add remaining ingredients, and cover with the juices. Allow to sit in refrigerator at least 30 minutes, up to four hours if you can.

I served it with a black bean salad for additional South American flavor. So easy, and so delicious.