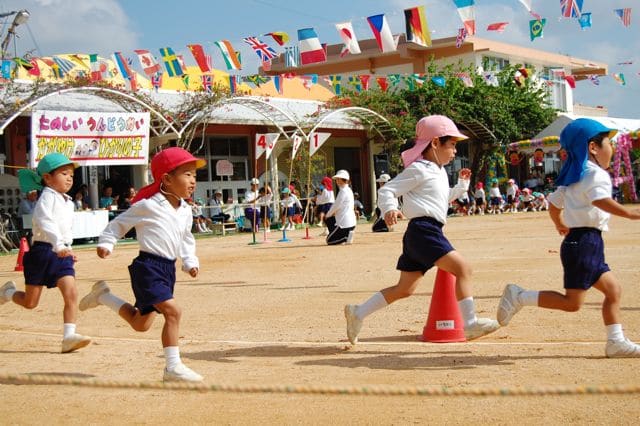 This post was originally published on October 3, 2009; we are resharing it with you so you have a better understanding of this unique national sports holiday. Taiiku-no-hi is a national holiday celebrated on the second Monday of October; this year it falls on October 10th.

Japan breeds a sports culture where spectatorship is equally important

In Japan, it seems as if there is a holiday for every occasion, and the concept of encouraging a sports-minded culture is not outside the realm of reasons to celebrate. Next month, on Monday 12th October, Japan will host it’s 43rd Taiiku-No-Hi (National Sports Day).

The initiation of Taiiku-No-Hi as a national holiday came about in 1966, two years after the summer Olympic Games were held in Tokyo (incidentally, the games were held much later in October in an attempt to avoid the rainy season). The Japanese Government decided that it would be beneficial to the people of Japan to set aside one day a year for the express purpose of promoting sports as a means of attaining improved physical and mental health; thus was born the Undokai.

The what you say? Some of you may have recently observed some type of crowd-drawing festivity at your local Japanese school and wondered what the hubbub of the commotion was all about. Typically preceding Taiiku-No-Hi is a succession of school sports festivals. These festivals, known as Undokai, are one of the highlights of the year for many young Japanese students. Take a look at the following photos to see why:

Then the games begin

And the little kids get to showcase their parents!

The Undokai is an all-day affair, attended by not only immediate family members but often extended family members and close family friends. I highly recommend that you try and get yourself invited to one of these events before leaving Okinawa (of course you don’t need an invite to attend but it’s much more fun with a group of people who have some affiliation with the school). The obento lunch boxes add more appeal to the day’s events too; Japanese housewives will generally rise very early in the morning to prepare their families’ favorite foods, and I guarantee that if you like Japanese food, they will become some of your favorites too!

One more thing worthy of mentioning about the Undokai, is that there are no “individual” prizes; awards and recognition are given instead to “teams.” The objective of eliminating individual rewards is to advocate a fun, team-building climate in which students, parents, and teachers work together to gain points for their teams; the end result is that everyone goes home feeling like a winner.

Rounding out the day is the closing ceremony, and as is customary at the beginning of the event, the end of the day’s activities may also include a series of light stretching exercises, usually choreographed to music that is played over the loudspeaker system. Such stretching exercises are not performed purely for their physical benefits, but also as a way of enhancing group unity. If you’ve ever driven past some of your local government offices in the early hours of the morning, you may have seen the employees standing outside in the carpark performing Rajio Taiso.

Rajio Taiso is a daily, early-morning music broadcast on public HNK radio. It’s popularity ensued soon after WWII and eventually took hold among students and company employees as a way of maintaining Japan’s sports and health-driven culture, while also nurturing group cohesiveness among those who practice it.

There are so many things I love about Japanese culture and its underlying values, but being an avid pursuer of all things health and sports-related, I especially love that Japan impresses upon its people the benefits of incorporating sports and exercise into their everyday lifestyles. Surely that has to be one of the contributing factors to Japan’s greater than average life expectancy!