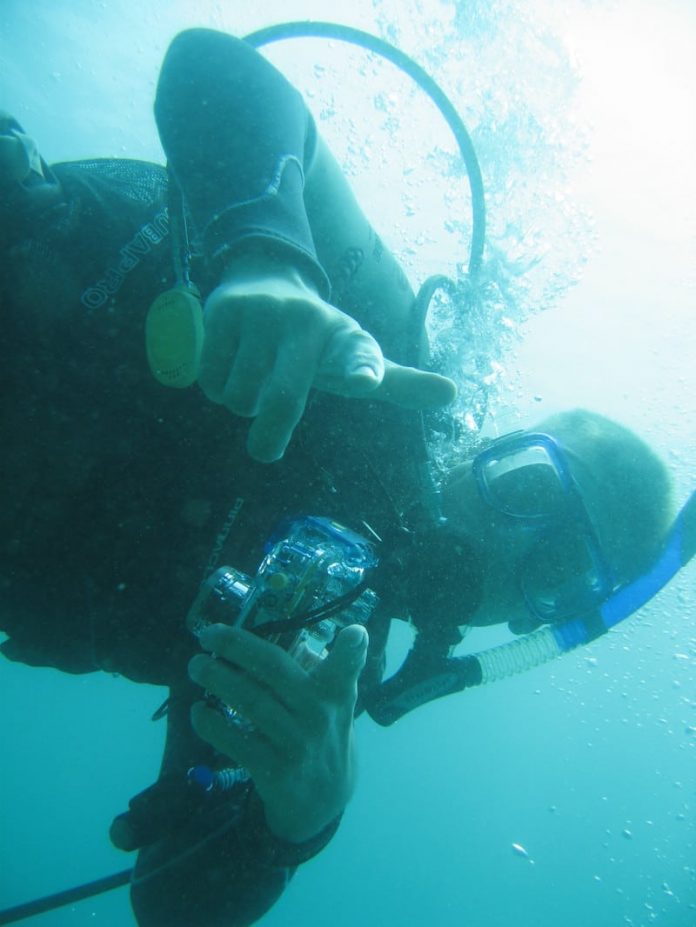 Unfortunately, BYOB in this case doesn’t mean “Bring Your Own Beer”, but instead refers to a “Bring Your Own Buddy” promotion sponsored by Tsunami Gear through Memorial Day to encourage people to get their PADI scuba diving certifications.  It’s a great deal because you and a friend, spouse, significant other, etc. can take advantage of free tuition for one person and basically split the cost.  You do, however, have to pay for your own class reading materials.  The grand total for me came out to about $120.00.  Not bad at all when compared to other facilities in Hawaii or in resorts/cruises.

Financial details aside, here’s my take on the scuba class experience.  I am personally not comfortable in the water.  I’ve been on this beautiful island for 2.5 years and not once did it occur to me that I should become scuba-certified due to:
1) my fear of deep water
2) my fear of snakes and other legless creatures in the ocean
3) my fear of not seeing my husband and children again.

Lest you think that I live my life in fear, I really don’t – honestly!  I’ve hiked, biked, and want to sky-dive someday, but water comfort is just not my forte.  I learned to swim as an adult b/c we bought a house w/a pool and I needed to know how to get in to the deep end just in case my kids decided to jump in. We ended up living by the Sunabe Seawall with the East China Sea about 100 meters from our house.  It’s beautiful to look at, but please don’t make me get in there! So you get the picture that I love to look at water, just not be IN it.  Well, my almost-master diver husband, Bob

, learned about the BYOB promotion and that was the end of it for me.  He’s nagged, cajoled, bribed me for 2 straight weeks to take this class and I finally caved in to his pleas to take the plunge – literally.  Fortunately, I don’t have to endure this alone, so I’ve dragged my good friends Kandy

, Staci, and her hubby Steve

along for this ride.

Classes are offered either on a daily basis for about a week or can be condensed into 2 consecutive weekends.  My BYOB buddy – Kandy, and I aimed for the weekends due to free childcare (aka our husbands).  Day 1 was mind-numbing due to the approximately 5 hours of classwork and pop quizzes and then a swim “assessment” in the pool where you have to swim for 200 meters without stopping and then tread or float in the water for a full 10 minutes.  I was pretty worried about that swim portion of the assessment b/c I was out of shape before I had my silly Billy

and it’s been a downward spiral fitness-wise since his birth. So I practiced a bit and Kandy and I passed! Hallejujah!  Now the fun stuff can begin….

Day 2 was another day of  2-3 hours of classwork and a 50-question final exam.  By this time, we’re ready for some real-life diving, even if it’s in the pool.  After orientating ourselves to the equipment and learning how to put it on, our instructor, Charles, told us to fall face first into the pool.  It’s embarassing and comical how much of a novice I am! I bobbed around uncontrollably with the scuba gear and felt ridiculous.  Then we went underwater and miraculously became weightless and free AND we were breathing underwater!  That first breath underwater is both weird and wonderful all at the same time.  That took some getting used to and right when I got used to breathing underwater, we had to learn several underwater emergency skills where our regulators (aka the breathing apparatus in our mouths) are taken away from us.  What??!! You’re taking away our life-giving oxygen?  Again, that took some practice and mental mantras of “it’s going to be ok, it’s gonna be ok”, but eventually that becomes second nature, too.  We could have taken all night to go through all the skills, but Instructor Charles

decided to give us a break and come back for an extra night of pool scuba skills.  That was Day 3, which was pretty much 5 hours of being in the water.  Now on to the real stuff – the wide, wide ocean!

Day 4 was comprised of 2 separate dives.  We reported to Tsunami Gear at 6:15am and got into the water at around 7:30am on the seawall in the Minato area.  We descended with the help of a rope attached to a buoy and that was comforting.  It was also comforting to be there with Kandy and Staci, my female comrades in a class full of young marines and active-duty male instructors

.  However, kudos to Charles and his assistant instructor, Andy, for being super-nice and patient and funny and charming while at the same time instilling in us the seriousness of how important it is to learn these emergency skills and dive correctly.  The whole notion of blowing out your lungs if you ascend too quickly or getting the bends is enough to make one listen very carefully to instructions and follow them!

So Kandy and I

descended slowly hanging onto that rope for dear life and made it to the bottom safely.  Then we started swimming and that’s when fear took in b/c I started sinking very fast and kicking at coral – oh, how terrible i felt for disturbing any living things in there!  Asst. Instructor Andy quickly inflated my BCD vest, but that made me start floating to the surface (remember that rule of not ascending too quickly?!), so he pulled me down and took out air to equalize my position.  Sounds comical right now with my feet firmly planted on dry land, but 30 feet deep underwater, it was downright frightening.  When we came out of that dive and took off all our equipment, it turned out that Bob (my hubby) and I had miscommunicated and somehow I had enough weights for a 220 lb. person in my BCD vest!  Ooops….please learn from my mistake and make sure you’ve got the right amount of weights BEFORE making your very first ocean dive!  Needless to say, the 2nd ocean dive was much better although much longer.  We were underwater for quite some time and also had to demonstrate more skills at the surface.  If  you get at all motionsick like I do (i.e. riding in the backseat induces waves of nausea), be sure to take some dramamine or other medication to help with seasickness b/c I was pretty sure that I was going to hurl at some point after bobbing around in the ocean water for awhile.  But wonderfully calm and nurturing Staci helped me out and basically guided me back to shore before I had time to “feed the fish” as Instructor Charles put it.  Blechhh.  So that was the end of our first ocean dive day.  We survived!

Day 5 was also made up of 2 dives, but this time, we’re making our descents rope-free and only a few more emergency skills to go such as retrieving lost masks and learning how to “hover”

in midwater so as not to disturb any aquatic life.  We met again at the seawall, but along a different spot where we had to wade through the coral before a ledge drops down to 60 feet – yikes!  Kandy and I, being petite girls, had a hard time navigating all those rocks and coral, so ended up just snorkeling most of the way out to deep water. We decided beforehand to hold hands

on the descent and throughout the underwater exploration so as not to lose each other AND it was just plain ol’ comforting to have some sort of lifeline when you’re so deep underwater! To make a long story short, these dives were wonderfully exciting.  We got to see lots of creatures that you’d rarely see while snorkeling

, our underwater comfort level increased, and we were allowed to use cameras, so that was alot of fun.  One of the guys in the class was kind enough to use Bob’s underwater camera to take some shots of me and Kandy in full scuba regalia underwater.

All in all, what a relief to know that we did it!  I was completely out of my comfort zone, but somehow surged forward and got certified.  It wouldn’t have been half as fun without awesome instructors and nice guys in the class AND of course a buddy like Kandy and Staci to joke around, commiserate, or celebrate with. So cool and comforting to have girls in the class with me.  Really, it did seem at times that scuba diving is a male-dominated world.  Where are the fashionable platform fins like these

?  It may be TMI, but I’m a nursing mama and they’ve got nursing tops for everything it seems – how about a quick-release nursing wetsuit?!   All kidding aside, Kandy and Staci really were my cheerleaders and helpers and such.  Thank you, Kandy and Staci and Steve, too!   Also much thanks to my lovable husband for making me do this in the first place (Bob, I get at least 1 shopping spree out of this! 🙂 and for the hours of childcare and encouraging words.

Just a couple of notes about the whole process if you’re in the same boat as us – meaning that you have a family or are a bit older (don’t panick! by “older” I just mean older than the 18, 19-year old fit and healthy Marines who were in our class).  It’s definitely an energy-draining process b/c of the newness of being underwater, learning difficult skills, swimming, etc., but the good news that I discovered is that scuba diving burns more than 500 calories per hour! woo-hoo!  I guiltlessly indulged on ice cream on those days that we were in the ocean.  The course is also time-consuming.  It was an average of 7 hours away from home and family.  For me, that was difficult b/c I had 2 little ones plus a nursing 4-month-old.  But Bob and I made it work by having our dinner breaks together and the whole family visiting me between dives out on the seawall.  So now Bob and I are a diving duo and we’re looking forward to an activity together that’s an escape from our cute, but very active kiddos

Thanks for taking the plunge with me and see you in the water soon! 🙂