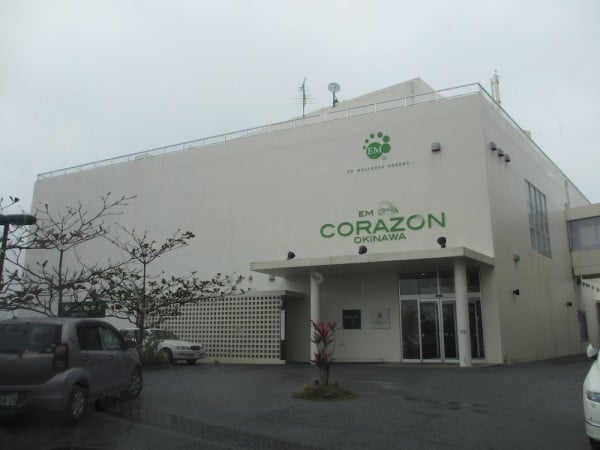 After winning an EM gift certificate to a spa at a dinner I recently went to, I was ecstatic.  I love spas and this was like an answer to prayer especially since I was really missing my husband.  I was familiar with the EM hotel high atop the mountain overlooking the Pacific Ocean, Chatan, Plaza and Foster since we had a great and healthy buffet there once.  The gift certificate was all in Japanese, so I asked a local friend to translate it for me.

Imagine my shock when I found out it was for the “bath” part of the spa. I knew it was too good to be true–I had wanted the oil massage.  I happily offered the two certificates to her.  But my friend was very excited for me.  She encouraged me to go with her.  At first, I didn’t want to go.  There’s definitely no hiding there – everyone is unclothed – so I wasn’t sure if I could do it.  But I have friends who went to Korea who love bath houses and some of my Japanese friends who swear it is the best thing, so I decided to give it a try, after all, how embarrassing could it be if everyone else is doing the same thing? I decided to go with one friend who frequents bathhouses and then convinced another friend who had never been to one to go with me too.

So here is how my experience at this bathhouse went.  It was far more relaxing and amazing than I thought it would be.  When I thought of bathhouses, I thought of those fountains from Italy.  The Trevi fountain in particular.  There’s the statue of the muscular Ocean seeming to command the world while being carried by his chariot and Tritons.  Or maybe since we were in Japan, I imagined a zen garden surrounded by bamboo and pruned bonsai trees.  There was nothing like this at EM Spa Corazon Okinawa.  I’ve also heard of themed bathhouses in mainland Japan, but I guess they don’t do that here in Okinawa.  It was comfortably simple, with warm and inviting décor.  The men’s and the women’s bath areas are totally separated from the very beginning.

So we started by taking our shoes off and leaving them in the locker before we pay to enter.  Then we were led to the bath area where you take everything off — yes, every stitch of clothing off and stick those things in your locker.  Then we went to another room full of low vanities.  Everyone has their own little space where you sit on short plastic stools and there is a shower handle & hose hanging on the wall.  I entered quickly with my friends, not looking at anyone, took a seat and observed like a little spy.  I tried to see what everyone else was doing and did the same thing so it didn’t look like I didn’t know what was going on.

I’ve never showered sitting down or even in front of a mirror before, so that was a change.  No one talks to each other and everyone seems at peace.  It was a change from my showers at home where my kids are calling out my name every few seconds.  Of course my normal showers are also really quick.  Not so here.  Here, everyone was taking their time, enjoying it, so I found myself lathering my hair for a long time, making sure every strand was taken care of.

The shampoo and conditioner were all there on the vanity, waiting for me to use them.  I washed my hair, got my hair conditioner and lathered that on.  Then I scrubbed my body for a while, enjoying no screaming kids and no demanding husband.  When I felt that I was all done, I noticed that the ladies who got to the showers before me were still there, taking an even longer time than I did.  So I sat there for a while, spraying myself with warm water and relaxing.

Finally we walked to the hot bath, and at first I tried not to make eye contact and tried to cover myself with my hair.  The very few times I looked into the faces of the other Japanese ladies, they glanced at me then looked away—as if it was completely normal to see other ladies in their birthday suits.  And for them it is normal, because I found out later than many Japanese women come to the bathhouses regularly to relax.

I quickly submerged myself in the extremely hot bath.  I soon got used to the temperature.  After a few minutes, my Korean friend told us to go to the sauna with her.  We got in the sauna, but after a few minutes, I felt faint and weak from the heat and excused myself to drink some water.  I felt fine after that.  I saw some ladies pouring icy water on themselves and so I went with the flow, thinking what on earth I was doing.  But the cold water felt good after the extremely hot water.  I was just doing as the locals were doing.  I dipped into the hot baths once again, then rinsed off at the end.

After it was over, I realized that I had just had a wonderful experience, and now I know what all my Asian friends were raving about!  There was no reason to be embarrassed, no matter who you are.  Everyone was there just to enjoy the relaxation time, probably most of them were trying to escape their kids like I was!  I also found out by doing a bit of research that most of the world enjoys hot public baths, usually without clothing.  It is a uniquely American thing that we aren’t accustomed to doing that.  But all Japanese kids grow up doing this sort of thing, and it is typical around the world.

But for people who want other things to do than the bath, EM Spa Corazon Okinawa has a lot more to offer.  There are different types of massages from ring stones to hot stones, facials, head massages and body wraps, detox treatments, reflexology, and scrubs.  They also have all day packages where you can eat a meal from the organic buffet restaurant in the hotel.  And when it’s time to leave, they give you another coupon where you save $5 on your next visit.

Since my first bathhouse experience, I’ve done it a few more times.  I have also learned that bath house etiquette can be different from wherever country you’re visiting.  For example, in some places it’s okay to have your children with you even though the child is of the opposite sex and of age to know about the differences between guys and girls.  In some places, it is okay to have your hair down, while in others, it’s a huge no-no.  But these things are usually explained ahead of time at the reception.

Everything I experienced at EM Spa Corazon Okinawa was very nice and was a great experience for a first-timer.  We were escorted to the places we wanted to go to and they provide a nice bag with towels and a change of lounging clothes.  We went at around seven at night and were surprised to find many people there just relaxing and getting treatments.  We were definitely purified after our visit—inside and out.

Directions:  From Foster’s Macaroni Grill gate, turn right on 330. Take a right at the light before Rose Garden.  Follow the road all the way to the top of the hill where you will see a green EM sign with green circles on the white building.  Right next to the building is EM Spa Corazon Okinawa.