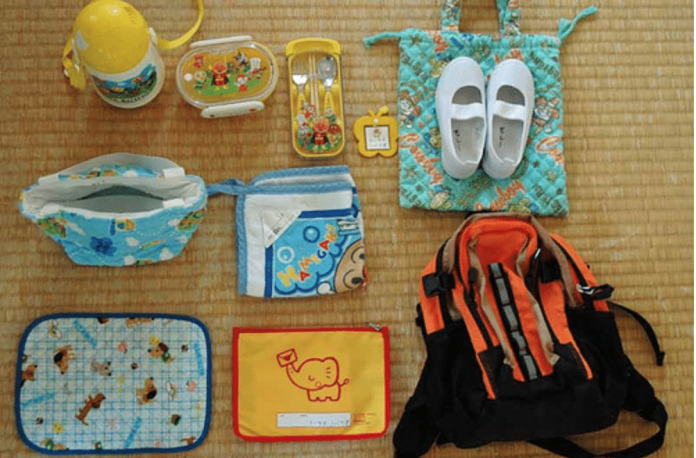 Eli started school back in April which might as well have been a lifetime ago. It was most certainly years ago when I felt like THIS. He attends a Japanese preschool called Oseibo Yochien near Kadena Gate 2. Eli loves it. I love it.

On Mondays every mandated supply pictured here travels to school with Eli and each of his twenty classmates. And every day last week I forgot one of the above because apparently the checklist on my front door just isn’t enough of a hammer over my head. Aside from my general state of disorganization, some of these supplies don’t culturally click with me and therefore get left behind easily.

Let’s review his school supplies, shall we? Starting clockwise with the Anpanman thermos and ending with the towel in the center.

1. Said thermos is to be filled everyday with water or tea. This is our second thermos as the first one couldn’t withstand the daily swinging and beating against the floor routine that Eli demanded of it.

2. The lunch box here is to be filled with no more than they can eat and food that we are under the impression that they dislike so that the social eating environment might coax them to down carrots and green beans gleefully. Please note the size of that lunch box. No space wasted for a thermos to roll around. Also no need for a thermos to roll around since it’s worn around the neck.

3. Utensils here. I remove the chopsticks because I’m fairly sure Eli has better uses for chopsticks than eating.

4. Name tag with his name in Katakana. E-la-E No-Bah-E-O. And an angel because he is in the Angel class. The two-year-olds are the ANGELS. That’s nice of them to say so!

5. Shoe bag and indoor shoes. These arrive on Monday, stay the week and then return home at the end of the week for cleaning. Their outdoor shoes are exchanged for these slippers outside the classroom. There is some distaste for the barefoot that I always violate.

6. Backpack. Inside here are diapers although I am encouraged to send him to school in straight up underwear and they’ll handle the damage. I’m not brave enough to inflict that on them just yet. Also inside are two changes of clothing. Every day after lunch their clothing is changed. Or at least Eli’s gets changed due to his version of “eating”.

7. This is a fabric, zippered envelope of sorts where school messages and classwork are passed between teachers and parents. Daily there are at least two papers that Eli has COVERED in stickers. I imagine them rolling their eyes at his sticker issues.

8. Here we have a placemat on which Eli’s lunch is set. How clever and tidy and unheard of. We were given specific dimensions that this placemat needed to be. No smaller than a can of beans and no bigger than a windowpane. Or something like that.

9. This is the lunch bag. In here goes the lunch box, the utensils and the placemat. This is fabric and comes home after each lunch for a washing. I don’t always wash it but on Thursday he spilled blueberries in the bottom and I thought that might not pass unnoticed.

10. The hand towel with the hoop. After Eli puts on his school shoes and updates his attendance book, he puts his towel on HIS hook. Everything of Eli’s is labeled with a pig. These towels are used for a variety of things that I can imagine but I don’t totally understand why each day it comes back soaked in a plastic bag.

And now you know.