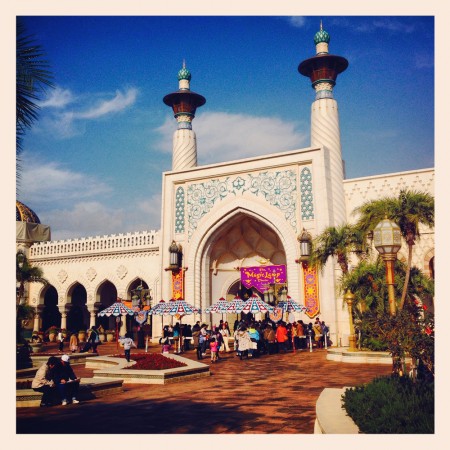 Since my family decided to go to Tokyo Disneyland, we decided the trip would not be complete without also going to DisneySea. During our research of the park, we saw it described continually as a park “unlike any other Disney Park,” and those statements were very accurate. We didn’t really know what to expect going into the park, but we were amazed at all the beautiful scenery.

The park entrance drops you off in the Mediterranean Harbor area that is home to a large open body of water. Instead of parades like in Disneyland, they have shows that happen on the water in the Harbor. Luckily, since the area is open, there are several great points to see the show from around the water. The singing in the show is all in English, but the spoken parts are all in Japanese. My daughter didn’t seem to mind not understanding; she was too excited about seeing all the Disney Characters.

We were able to see the “Holiday Greeting from Seven Ports” and the “Fantasmic!” shows, but there were several more we could have seen. The show schedule should be an insert in the park map, and if you want an English version just ask a ticket taker at the front gate.

To the right of the entrance you will find the American Waterfront area, where the Tower of Terror and Toy Story Mania is located.

Past the S.S. Columbia you will find Port Discovery, then Mysterious Island where the 20,000 Leagues under the sea is found. My daughter really enjoyed the ship ride and the décor in the area felt like something right out of a Steampunk graphic novel.

If you keep to the outer band of the park the next area is the Arabian Coast.  We spent quite a bit of time in this area exploring the Bazaar and riding Jasmine’s Flying Carpets. The area also had a two-story carousel that my daughter loved.

We decided to grab lunch at the Casbah Food Court that offered a variety of curry; my husband is a curry addict so we had to feed his addiction. We were also able to find curry-flavored popcorn just outside the area. My husband said it was some of the best popcorn he has ever tasted.

The last area of the park is the Mermaid Lagoon area, and one of my favorite areas. Within the area is Triton’s Kingdom, which is all indoors, and makes you feel like you are underwater in the ocean. Since one of my favorite movies growing up was the Little Mermaid, this place was amazing to me. My daughter who also loves the movie had a blast. We rode almost all the rides available in the area!

We also watched the “Under the Sea” show. The songs were in English, but all the talking during the show was in Japanese.  However, with all the amazing theatrics and the acrobats my daughter did not seem to mind at all. The last area in Triton’s Kingdom was probably one of the best, Ariel’s playground. If you have a rambunctious preschooler like ours letting her run around for a while and burn off some energy was great. The area had lots of interactive elements, a rope walkway, and Ariel’s treasure room with a full Prince Eric Statue.

We purchased our Tokyo DisneySea tickets online prior to leaving Okinawa. We opted to purchase individual day passes, as we wanted to take a break in between parks, and the two-day tickets must be used consecutively.  Also remember the food vendors only take yen, but the shops take both Mastercard and Visa.

Both inside and out of the park you will notice a lot of people walking around with little and large teddy bears. These are Duffy and Shellie May. According to my research, Minnie Mouse created the main character, Duffy, for Mickey Mouse, as he was packing for a long voyage at sea. The bears have become very popular in Japan.

We did find DisneySea to be less for rides, and more for scenery, shopping, and eating, but if you are planning a trip to Tokyo and Disneyland, you should definitely check it out! You will not be disappointed.

Directions: We took the metro from New Sanno; below is what we did. We found taking the metro to be pretty easy while in Tokyo.