Following a last minute trip back to the States on emergency leave with my three children, ages 4, 7 and 9, I heard, “You are so brave!” more times than I can count. There are lots of extra things to think about when traveling with children, but I can tell you from personal experience that you shouldn’t be afraid. With Spring Break and school summer vacation on the horizon, you can travel adventurously with relatively little stress! 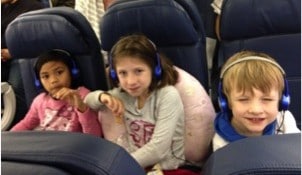 My husband and I were stationed in Okinawa 14 years ago. Young and free and childless! We had a great time and did some sightseeing, but did not take advantage of the travel opportunities at our fingertips. So, when we found out we were on our way back for another tour, we were determined not to let the same thing happen. There was just a tiny problem with our vision of all the sights, sounds, and places we would be visiting… three of them to be exact; our darling children, a 4 year old boy and two girls, ages 7 and 9. Honestly, they make our trips exciting in ways that we would never have noticed as adults. However, it does take a bit more preparation to pull off travels that are fun for both the parents and the children.

Prepare the kids with words. Before any flight or trip, we start casually talking to them about what they will see and do while we are traveling. More importantly we talk about what they will NOT do. It kind of becomes a game. “So, guys. What are the rules on an airplane?” We’ve been doing this for a while now, so I even get smart remarks from the 4 year old like “Don’t jump out of the plane without a parachute?!?” But eventually we go through all the big issues I dread occurring. “We don’t whine and cry, we don’t kick the seat in front of us, we keep the seat belt on”. Talk about what they CAN do as well. “You can look at the clouds, listen to music, play with your toys, read (or pretend to read in the 4 year old’s case), color, or go to sleep.” It’s still unbelievably exciting that they can “Go potty up in the air when the seat belt light turns off!” 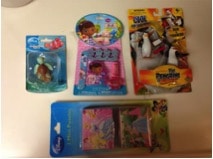 Pack your bags (and their bags): Each child has his or her own little backpack. Before every flight I find a few toys that are unopened and unseen by them. The dollar section of BX/PX (or Target when in the US) is perfect for this. I also hide away these little toys when they come in care packages from grandparents in the States. Once you get on the plane, you allow your child to open one toy at a time. (Now that my kids are a little bit older, I have less of a problem with this, but when they were 1-3 years old, this could buy me the precious 5-10 more minutes of silence needed).  *Don’t bring toys that make sounds. There’s nothing worse than hearing “Beep-beep-booooooo-glack-ding-dong” sixty-seven times in a row with nowhere to go. It will INEVITABLY be your child’s favorite toy for the entire flight and you will be more than stressed worrying about whether other passengers can hear it. From personal experience… just don’t go there.

Bring electronics: But save them as a last resort! I am always amazed at how many flights and rides we go through without ever having used the DVD player or hand-held game. But it’s nice to know they are there when we want them.

Diapers and Pull-ups: Pack a bag or suitcase with the amount you think you’ll need for your trip. Then… pack 10 more and put a few of them in every other bag you have with you. You never know when you will be laid over in an airport or have a baby with a blow-out.

Sanitizer wipes: I bring more of these on every trip than I can count! The minute we sit down on the plane, we wipe down every surface we can. Particularly, the tray table, seat belts and arm rests. I’m sure I look like a germaphobe (my husband has told me as much), but ever since we began doing this, we have not gotten sick during or shortly after our travels. Just think how many people touch the surfaces on an airplane and all of the things they have been in contact with. The two minutes it takes to clean up your own area on the plane before your child puts something in their mouth or even just buckles the seat belt and then rubs their eyes could save you a week of illness.

Stroller or baby back pack: I have never been much for the stroller while traveling because it just felt like one more thing to carry. But I won’t deny that it works well for a lot of people I’ve talked to who have multiple children or children younger than mine. Consider whether you are traveling with one adult or more, and think about what you might need in the worst case scenario if one or more of your tiny traveling companions aren’t quite cooperating with the rush to get from point A to point B. We use a “Boba” baby carrier and it’s lasted way longer than I ever thought it would. I still carry my 4 year old around in it, and he’s a giant for his age.

Snacks: Never underestimate the power of low blood sugar. We bring fruit snacks, buddy fruits, granola bars and juice pouches everywhere. Most of the time we don’t end up needing them, but having them for hunger, thirst, or a cure for momentary boredom is a lifesaver.

Last, but not least, be flexible and open to things that children find interesting. We take our kids to temples and museums. Not just the “fun kid stuff”. Sometimes that means we have to make a quick escape outside to play so that we aren’t disturbing any of the other sightseers. And sometimes that means that one parent actually “hears” the tour guide while the other is “finding things that are the color red”. It’s amazing what level your children rise to when you expect them to behave a certain way AND set the situation up to be as accommodating of them as possible.

In the end, remember that things work out regardless of the amount of stress you feel before, during or after the situation is occurring. I learned this as I traveled back from the U.S. (with all three kids).  First we got delayed in Raleigh for 6 hours, causing us to miss our flight in Detroit.  We spent the night, but then had a weather delay in Detroit, causing us to miss our Tokyo flight. We spent the night in Narita before finally making it back to Okinawa- three days later than I expected. And did I mention we only had our carry-on luggage with us? Our suitcases made it home four days after we did. Naturally, I wanted to panic at every set back. Having the children with me actually made it easier to say “Well, there’s absolutely nothing we can do about it… let’s go have a fashion show with the hotel bath robes”. 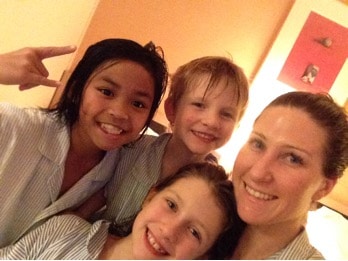