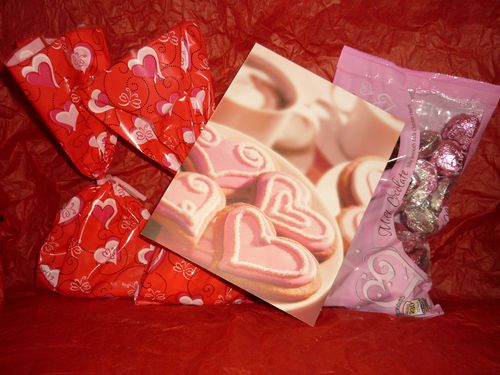 This post was originally published on February 13, 2010. We’re pulling it out of the archives for all of you – especially our newer readers – to enjoy.  Take note ladies, and don’t despair – your turn for some lovin’ comes next month, but in the meantime you can still tell your sweetheart “I love you” in Japanese.  Happy Valentine’s Day to all our Okinawa Hai readers.

Last week I talked about how one might say “I love you” in Japanese; this week I thought it would be fun to take that concept a little further and discuss Valentine’s Day traditions in Japan.

For the special man in her life, a Japanese woman can choose from various types of “honmei” (sweetheart chocolate); these chocolates are of much better quality than “giri-choco” and consequently cost a lot more. While “honmei” is still widely purchased, many women are now opting to surprise their loved ones with home-made chocolate treats. As you can see in the photo below, the department stores are catering to this trend.

Other recently adopted trends include the addition of “gyaku-choco” (reverse chocolates), and “tomo-choco“ (friendship chocolates). “Gyaku-choco” is chocolate that men can buy for women, while “tomo-choco” is chocolate that can be given to friends (this is becoming a particularly popular custom amongst young girls). Chocolates are also available for the little guys and gals, as shown below.

Valentine’s Day in Japan has it seems, evolved into a tradition where anyone is deemed eligible to be a giver, receiver, or both. Consequently this now thriving tradition has become quite the economy booster, with more than half of Japan’s annual chocolate sales estimated to be made around this time of the year. But given the generous nature of the Japanese people and their tendency to give, it’s hardly surprising.

Happy Valentine’s Day! There is still a ton of chocolate out on the shelves if you haven’t yet picked up the gift/s you need for tomorrow…….