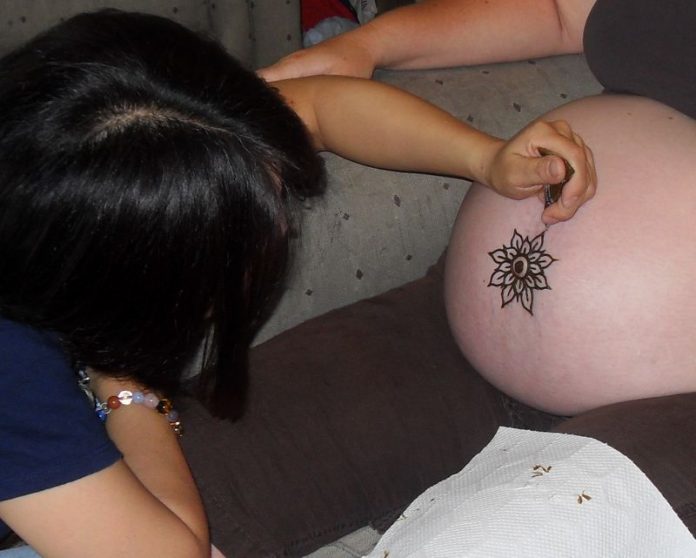 CONTRIBUTED BY JOELLE YAMADA
***WARNING***  Big BELLIES Ahead — May not be suitable for the faint of heart!
Four years ago during my first pregnancy, I was reading a Pregnancy magazine (as I think I ONLY did for that first baby) and came across an article about temporary henna tattoos done on pregnant bellies.  Being a non-tattoo person (can’t imagine any design I’d still like next week, month, year, decade) but loving the idea of it, I was totally drawn to this concept.
I finally tracked down a henna tattoo artist in California and my Mom and I spent an afternoon being decorated – me on my belly, her on her hand.
So I was SUPER excited a few months ago when I stumbled upon Vortex Art on B.C. street near Gate 2 Kadena.  I was having some embroidery done and next door was Vortex Art with a beautiful picture out front of henna tattooing.  On the bottom of the ad was the line I was looking for:  “NO black henna used” – WOOHOO!
I walked up the steep stairs and spent a few minutes talking to Dan.  She makes her own henna (it’s the consistency of frosting) with henna paste, lemon juice, tea tree oil and sugar.  She had a bunch of pictures for me to look at and told me that she’d be happy to come to my house for more privacy when doing the art design.
The conversation got me thinking about the hundreds of pregnant women I know right now, and so I sent out an email to a few of these and invited them to a tattooing party!  We got together on Saturday and Dan, who has base access, came to my house.  We sat in comfort, eating chocolate donuts with chips and homemade salsa (yeah, don’t ask...) while she decorated our pregnant bodies! 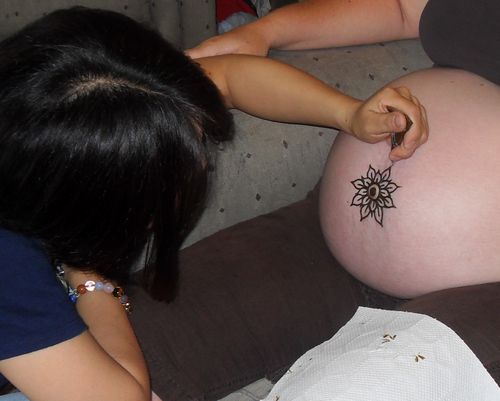 As we talked, Dan told us she has been doing henna art for about five years. She learned in Vegas where she and her former husband were stationed.  Previously, she’d been doing nail design – but prefers the bigger canvas of the whole body! I asked about the taboo on tattoos in Japan and how that affects her business. She said it is an issue, and that she has a lot of American customers, but that more Japanese are interested specifically because it is temporary. 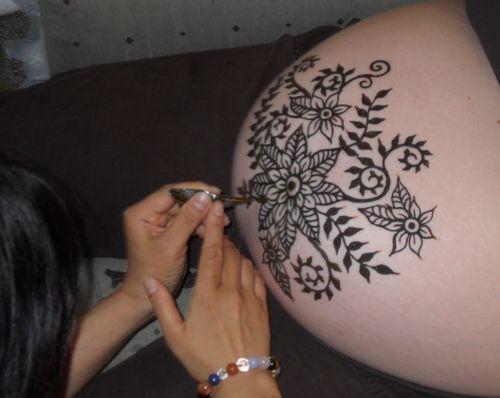 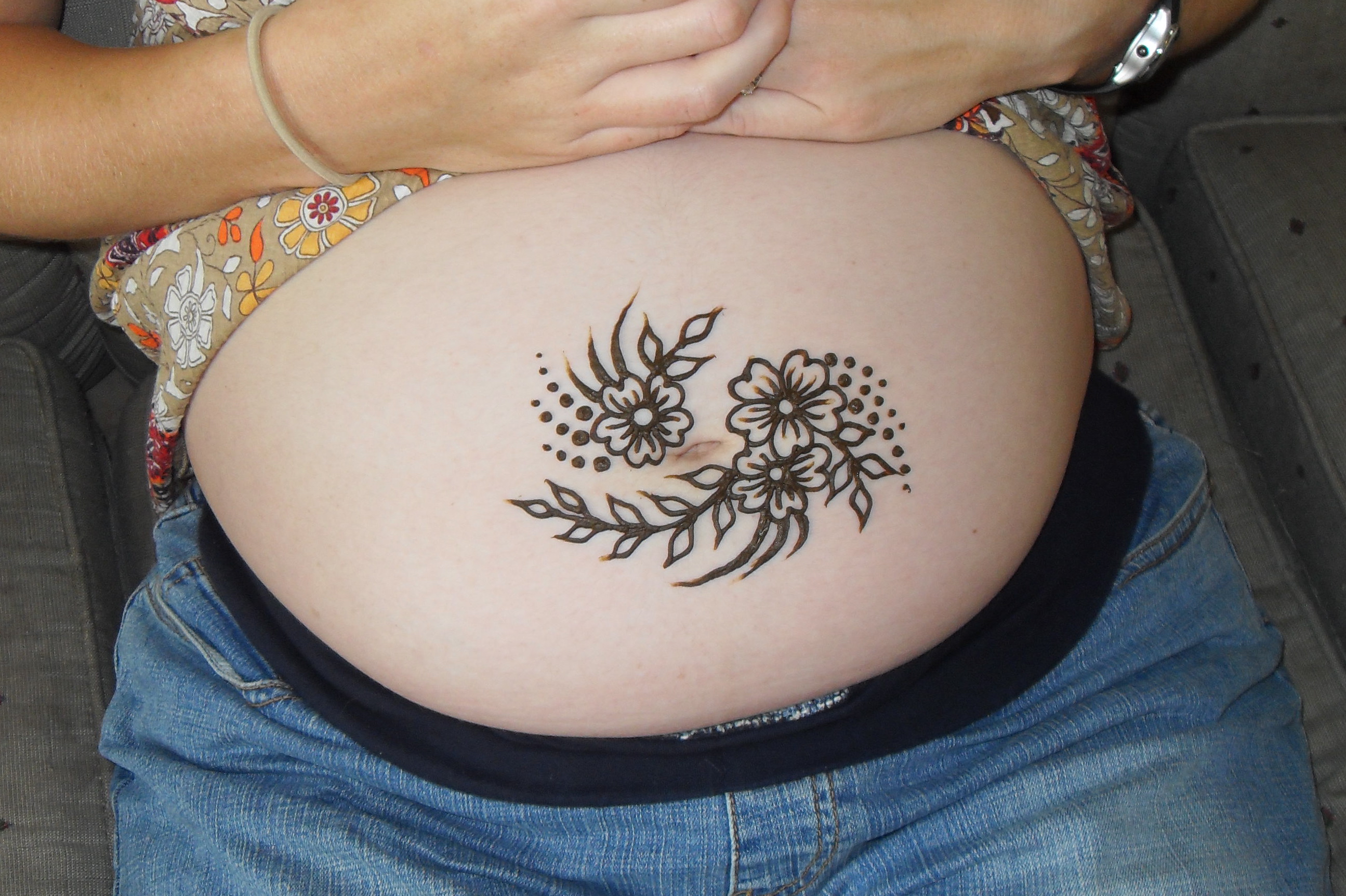 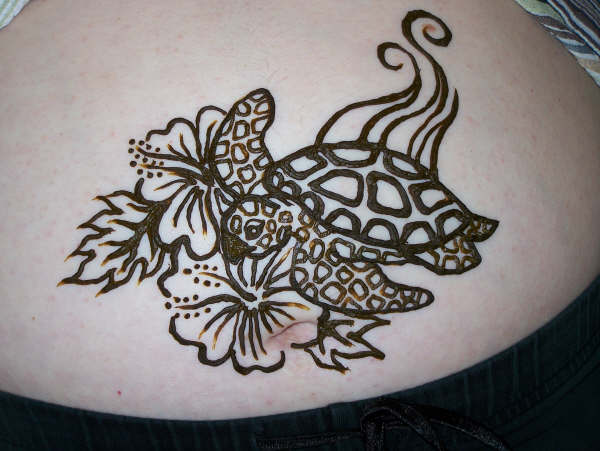 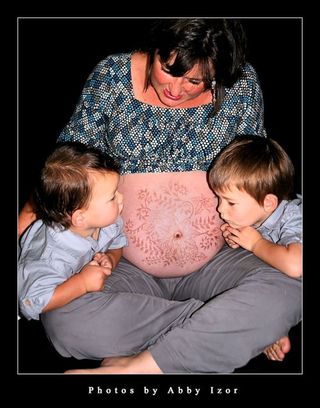 Photo by Abby Izor
It’s now 11 days later and it’s quite pale – but still there.
Dan gave us lots of hints on getting the darkest result possible:  hairdrying the henna in the first hours, drinking hot drinks, being out in the sun so as to sweat a bit (NOT difficult when pregnant), and taping over the henna frosting as to hold it in place over night.
So if you’ve ever been interested in tattooing, but didn’t want to take the permanent leap, I highly suggest trying some henna.  And the fun thing is, you could change the design every month!!  Dan said she’s gone to a number of birthday parties and other get-togethers to decorate the guests — what a fun party favor!! 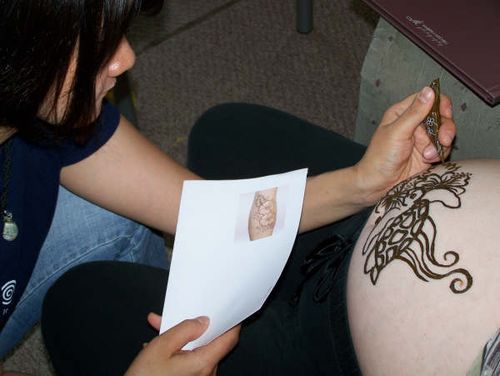 Her website shows tons of different options for designs on various parts of the body, but as you can see with Katie’s tattoo above, you can ask for you own design as well!  And she’s able to create a tattoo based on your price range.  I told her how much I wanted to spend (5000 yen) and she did a design for that amount.  Amber’s flower design was 2000 yen and Katie’s turtle was 3000 yen.

Phone: 080-6715-1290
Website: https://vortexartjapan.blush.jp
Email: vortexartbydan@icloud.com
Address: White River #2-1 Matsumoto 7-12-5 Okinawa-City Okinawa, Japan
GPS Coordinates: 26.3344266, 127.8055832
Directions:  Come out Kadena Gate 2.  Turn left at the 330 (Koza Music Center) and take the next left, which is a one way street called B.C. Street.  Vortex art is on the right side about 3/4 of the way down B.C. street next to some embroidery shops.  After you see the store, you can park down the next street to the right in a parking lot — a ticket validation is given at the shop for parking.