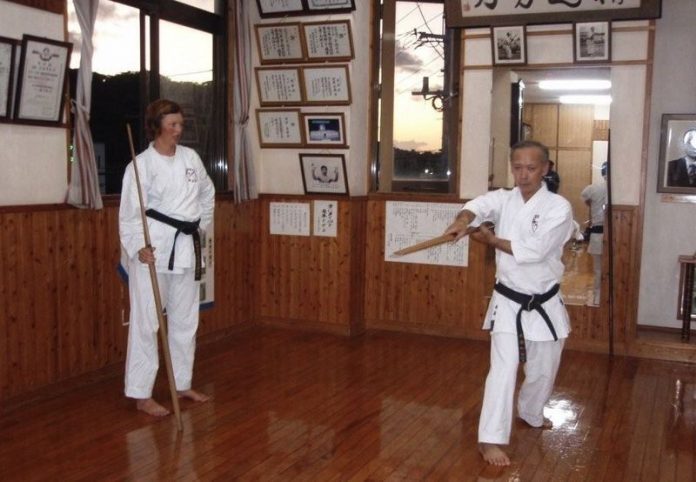 I have received some wonderful cooking posts from Penny over the last weeks and started an email conversation about how she came to be in Okinawa.  I’m always curious about those non-Japanese, non-military, non-ESL teachers living on island.  If you are curious too, I’ve attached her bio at the end of the post.

Last night I was at my martial arts class; the temperature was 90 degrees and the humidity 89%.  As you can imagine my face was bright red, so much so that a couple of people asked if I was sun burnt.  Sweat was pouring off me (did you know that calves can sweat?) and I had blisters on my feet and bruises on my forearms.  Then a really horrible thing happened; I was gasping for breath after a particularly strenuous series of techniques when a bug flew into my mouth and down my throat.  I dropped everything and raced to the nearest tap where all I could do was wash the bug down with gulps of water.  Both disgusting and painful I would not recommend this particular experience to anyone.  My fellow practitioners told me that it was just a little extra protein and that swallowing a bug is actually really good for cleaning your throat.  Hmm, that would probably be the ten glasses of water you swallow to get rid of the taste and to try to fix your raw throat.

In 15 years of practice that was the worst experience I have had at the dojo (training hall).  Training in martial arts here in Okinawa is still not exactly a walk in the park, especially in summer.  I would certainly forgive you for asking, “Why do it?”   The easy answer for me is that the positives far outweigh the negatives.  (If the bug incident were to reoccur, though, I may have to reevaluate.)

The most important reason why I do martial arts is the sense of accomplishment when I master a technique or kata (a series of movements).  It is like a natural high.  No matter how many years you train or what level you may reach, there is always something new to learn and improvements to be made.

Martial arts is an individual sport which means that you can never be cut from the team or sit warming the bench 90% of the time.  There are no tryouts and everybody is welcome.  We even have a couple of grandmothers training in our dojo.  Their progress is slower than the 20 year olds but it is steady and both are now black belts.  At the same time, as a student you are never on your own. Fellow students who help you train, give encouragement and become great friends surround you.

I have also found some of the best teachers I could ever hope to meet.  When my husband and I arrived in Okinawa we could not speak a word of Japanese and were extremely nervous, wondering how we would be able to learn anything.  The first and probably most important thing that we learnt was the best way to teach is not by talking about something but by doing and showing. By copying our teachers and allowing them to show us exactly where we are going wrong we have learnt so much more than by listening to a lecture.  This is something that we have to remind ourselves of regularly as we start to teach other foreign students.  There is always the temptation to spend half an hour explaining what we want rather than just getting on with the training and letting the students figure things out for themselves as they go along.

The second lesson we learnt from our teachers was to teach by encouragement. No matter what, they will never tell a student that they are useless or even that they are doing it incorrectly.  Instead, they will nod, say “Good job,” then give you a list of ten things to work on and improve.  I think that these are lessons that can translate into all forms of teaching and I try to think about them when I am teaching my daughter to tidy her room or dress herself.

I was born in Zimbabwe in Southern Africa and moved with my family to South Africa in 1982.

My future husband, Emile, and I moved from South Africa to Okinawa in 1996 to learn Okinawan martial arts.  We were married in a Shinto Ceremony in December of that year.  We aimed to stay in Okinawa for a year and ended up staying 5 years.  We left in 2001 just after achieving our teachers’ licenses in both Karate and Ryukyu Kobudo.  We spent two years in Amanzimtoti, on the South Coast of South Africa.  Then a friend offered my husband the opportunity of an IT engineer’s job in Tokyo and we found ourselves heading back to Japan.  Nearly two years later, he was transferred to Okinawa and we were able to continue our martial arts training in earnest.  Our daughter, Sahratia, was born in January 2008 and she has added a whole new world of wonder to our life here in Okinawa.  She attends a Japanese Hoikuen or daycare three days a week and as a result now speaks more Japanese than English.

We are planning to leave Okinawa in a few short months to continue our adventures as a family in the U.K., however, Okinawa will always hold a very special place in our hearts and I am certain that we will be returning here on a regular basis.